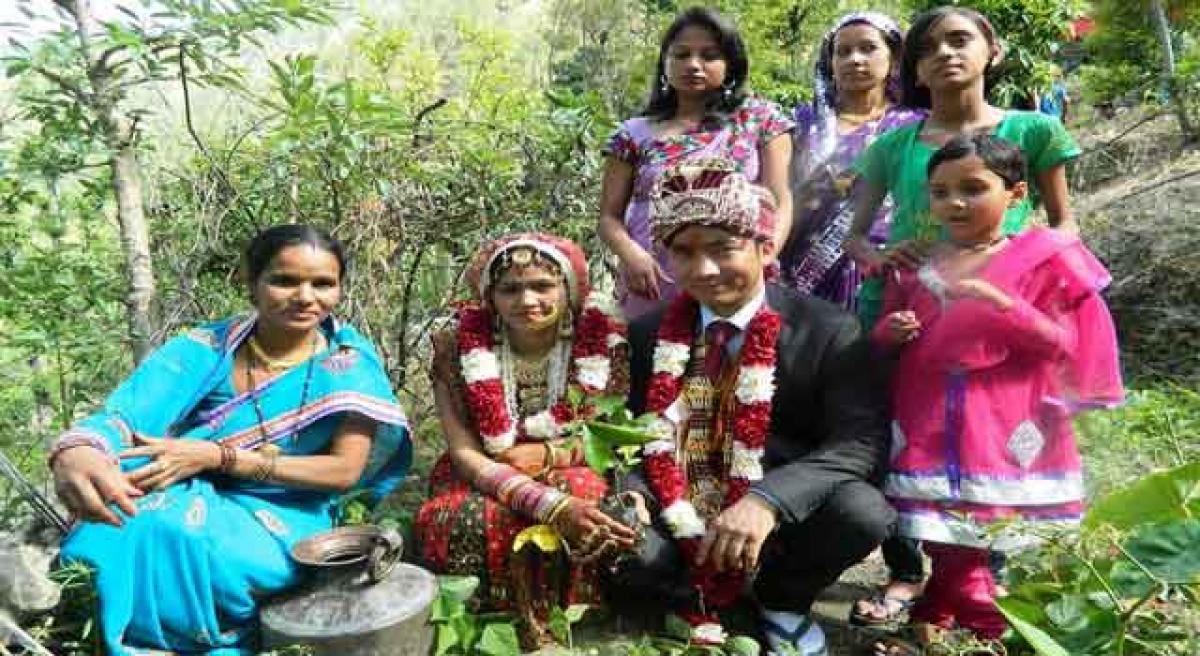 The marriage ceremony is over, the newly-weds step outside. No, they are not leaving, but are, in fact, making their way to a small clearing where they plant a sapling! Once they are done, a group of young girls rush towards the groom, who indulgently digs into his pockets and pulls out money that he hands over to the eager teens.

The marriage ceremony is over, the newly-weds step outside. No, they are not leaving, but are, in fact, making their way to a small clearing where they plant a sapling! Once they are done, a group of young girls rush towards the groom, who indulgently digs into his pockets and pulls out money that he hands over to the eager teens.

As the youngsters pocket the money, Devika Rawat of Bagoli village in Chamoli district, cheers from the side as this wedding ritual, which has become a tradition in the villages of Uttarakhand, concludes happily. After all, this money will not just be used for the upkeep of the sapling but also come in handy to take care of the needs of the under-privileged girls in the community.

Across Chamoli district in Uttarakhand, this tree plantation initiative, called Maiti Andolan (maiti is derived from ‘mait’, which is kumaoni for a married woman’s parental home), has established itself as a workable solution for environmental protection as well as promoting the welfare of girls.

Explaining the idea behind this initiative, Devaki’s neighbour says, “We feel that trees are like our daughters. So we raise and nurture them with the same love and attention. When our daughters grow up and get married, we ask them to plant a fruit tree sapling, normally orange, in the village. Besides helping maintain a green cover, it’s a wonderful way to remember and cherish our girls.”

What started as a one-of-a-kind, emotional experiment in the mid-1990s has evolved into a revolution today, spread across thousands of villages in the state. Kalyan Singh, a retired teacher and founder of the Maiti Andolan, recalls that when he had initiated this tradition from a small town, Gwaldam, in 1995, he had never imagined that it would become so popular in such a short span of time. "

Uttarakhand has always been known for its beauty and natural resources, but because of rampant development we have not been able to keep alive our natural cultural identity,” he observes. According to Singh, hill women are the strength and backbone of their family as well as the larger community, and through the Maiti Andolan - essentially a women-centric movement - they are promoting environmental protection and catalysing social change.

“There is a reason for calling this revolution ‘Maiti’. Women are more active and energetic than men and are very emotionally connected to their parental home. Besides, instinctively, they are more concerned about the future. So, by planting a sapling at the time of their marriage, they not only leave behind a precious memory, but play their part in safeguarding Mother Earth,” he shares.

The Maiti Andolan has generated a lot of public awareness and tree planting is now done not only during weddings but on other occasions as well. For instance, to mark India’s 50th year of Independence, each village in Uttarakhand had planted 50 trees, reveals Singh, adding, “Then, in memory of the Kargil martyrs, villagers, in collaboration with the Border Security Force, had planted 1,000 trees in the district that have become an impressive green forest known as Shaurya Van (Gallantry Forest).”

Of course, the Maiti Andolan has had a profound and lasting impact on society, states Devaki. These days, the wedding invitation that has the wedding programme listed on it, clearly includes the Maiti ceremony, she reveals. Additionally, instead of the old custom of hiding the groom's shoes to collect money from him the groom hands over a tidy sum to be distributed among the young girls in the village after the sapling is planted. This money directly goes into the Maiti Fund.

“While this ceremony has become the cultural identity of families, the Maiti fund takes care of poor and under-privileged women in the villages,” she informs. Girls like Kamli from Nauti village have a new sense of self-value and purpose thanks to the Maiti Andolan. “Young girls in the villages are an integral part of this movement.

We handle the Maiti Fund and take good care of the saplings planted by newly married couples,” says the teenager. “We are called the Maiti sisters and one among us is appointed as the head of the girls’ group. Through our efforts, we are creating extensive awareness about the need to preserve our forests and protect our natural resources,” she adds.

As the movement has expanded the villagers have incorporated another activity under it called Maiti Forest. “On a particular day, villagers do mass plantation on an infertile piece of land. This is done under the guidance of the Pradhan (village head). Every few years, because of these endeavours, a wasteland gets converted into a lush forest,” says a proud Devaki.

“Through this extraordinary revolution we are reclaiming our forests and reforming our social outlook. The number of saplings planted may not be huge, but the intent of planting them and subsequently tending to them has been an enormous success. And all this has happened without any government support or external donations,” shares Singh. The message of ‘Maiti’ is plain: ‘For every happy occasion, plant a tree for a beautiful memory’.