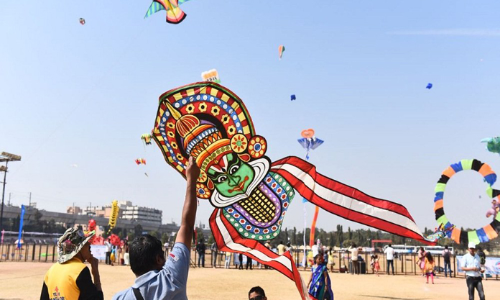 With Makar Sankranti around the corner, all streets of the Old City of Hyderabad have been beautifully decorated, while bright kites are flooding markets ahead of the harvest festival

Hyderabad: With Makar Sankranti around the corner, all streets of the Old City of Hyderabad have been beautifully decorated, while bright kites are flooding markets ahead of the harvest festival.

After the ban of China-made Manja in the country, traders have now started selling thread Manjas which are not harmful to birds. While traders are elated that sales have begun a couple of days earlier than last year, they are not quite happy with the demand currently and hope for things to get better in the coming days.

"I have been selling kites from last 16 years in the old city. We sell many different types of Fancy kites. We make kites with faces of politicians, and other celebrities to attract customers. We are benefited by the ban of China Manja in the country. We only sell the thread Manja which is made by us. Rates are reasonable in comparison to last year. We are hoping for a better business in the coming days." Mohammad Jhakir, a trader, told ANI.

Another trader named Mirza Shahid said, "I have been doing kite business for 10 years now. After the ban of China Manja, we have surely benefited. The sales are better this year. Rates are also less this year because of less GST and no demonetisation."

Sankranti is the day dedicated to Lord Surya and is celebrated by devotees taking a holy dip in River Ganges. As per the Hindu calendar, this day is also celebrated as the festival of harvest. The calendar reads Makar Sankranti to mark the beginning of the auspicious year.

From surviving the cold winters to moving towards the livelier season of spring, Sankranti is celebrated in various parts of India. In Punjab, a bonfire is lit with people singing and dancing around it. From wearing new clothes to celebrating it all night, the festival not only marks the beginning of an auspicious year but also brings the family together.­

4th TS Int'l Kite Festival is here
An international kite festival, the age-old tradition of Telangana, will be conducted at the Parade Grounds in Secunderabad from January 13 to 15. The festival, which saw eight lakh visitors last time is expected to draw nine lakh visitors this year, according to the Tourism Department Secretary B Venkatesham.

The festival of kites will be attended over by 19 nations. In all, 42 international and 60 national kite flyers will participate in the colourful event. Arrangements have also been made for the traditional event and a special night flying for three days will bring accolades to the State across the world.

Apart from the kite festival, food courts with various cuisines of Telangana, handicrafts and handlooms stalls will be showcased. In addition, International Sweets Festival is also being organized during the said festival where large number of delectable sweets of different states and countries will be showcased with more than 1,000 varieties of sweets.

All these sweet dishes would be prepared by Hyderabad residents who original hail from other States and countries. The citizens of Telangana and other parts of the country have been invited to witness the enthralling experience of kite flying and cherish the delicious sweets during the three-day period.