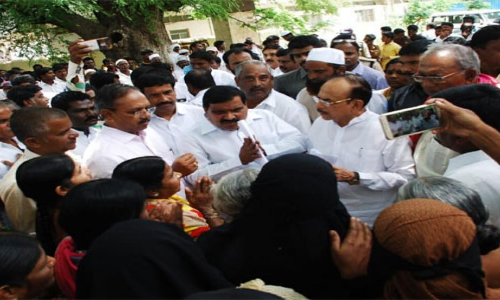 Kodangal: Deputy Chief Minister Mahmood Ali on Sunday said the TRS government had been implementing all of its poll promises, including scholarships to poor Muslim students and a financial aid of Rs 5 lakh to the poor Muslim students’ overseas education. He along with Minister P Mahender Reddy and MLA Revanth Reddy distributed sewing machines among Muslim women of five mandals.

Kodangal MIM party president SB Gulshan was taken into preventive detention as a precautionary measures as he went on record that he along with others would resist the party programme alleging that the programme was meant for distributing the sewing machines among the TRS party sympathisers but not to the eligible. Large number of women, Muslim religious leaders and TRS leaders Gurunadha Reddy, sarpanch Venkata Reddy, MPP Dayakar Reddy, former ZPTC member Mohan Reddy and others took part in the programme.