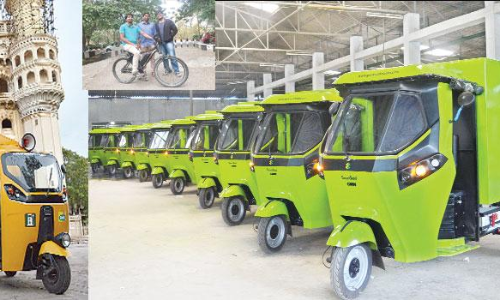 Our goal is to accelerate the growth of sustainable transport by bringing compelling electric vehicles to market said Hyderabad based Raja Gayam, CEO of Gayam Motor Works GMW which manufactures eAutorickshaws and eBicycles to make future of transportation smart and electric The brothers duo, Raja and Rahul Gayam, has launched Indias first electric smart auto powered by LiIon battery in 2

“Our goal is to accelerate the growth of sustainable transport by bringing compelling electric vehicles to market” said Hyderabad- based Raja Gayam, CEO of Gayam Motor Works (GMW) which manufactures e-Autorickshaws and e-Bicycles to make future of transportation smart and electric. The brother’s duo, Raja and Rahul Gayam, has launched India’s first electric smart auto powered by Li-Ion battery in 2015.

For their efforts, Raja Gayam was listed in Entrepreneur India Magazine’s select group of ‘25 Biggest Techpreneurs in 2018’ and Rahul Gayam was listed among the elite list of ‘Forbes Asia 30 Under 30 Entrepreneurs in 2018’. Raja did his bachelor’s in computer science at IIIT-H and masters at University College of London. Speaking to The Hans India, Raja Gayam, CEO, GMW shared the need of the EV-vehicles in the country to reduce pollution and to save fuel.

The duo founded GMW by converting their father’s bus body building unit into an auto-rickshaw manufacturing unit in 2010. Raja said, “My father ran the business for over 25 years, we grew up watching him build manufacturing. I guess it stuck with us,”

With the transportation accounting for 51 per cent of air pollution in India and as 22 of 50 urban areas with worst air pollution are located in the country, the brothers felt the need to switch to electric vehicles (EVs) to fix the problem.

GMW launched its passenger version of ‘Smart Auto’ in 2015. It was the first Li-Ion battery powered electric three-wheeler with a battery swapping system in the country. Raja added, “However, India lacks charging infrastructure for mass penetration of electric vehicles. So, we started off by selling cargo version of our Smart Autos to B2B and B2G markets for private companies and Govt of AP and Telangana,”

For EV vehicles, an effective charging infrastructure is required which takes care of range anxiety, and the necessary regulations around creating the ecosystem for electrical vehicles to operate smoothly.

“Today’s EV first-adopters in developed countries have largely been a buyer class passionate about doing their bit for global warming. If you figure in the cost of ownership, especially maintenance and fuel, electric vehicles are a bargain despite the high up-front price tag. Still, in a country like India, the high price tag will be an important consideration factor.

With prices of Li-Ion batteries falling by 20 percent year-on-year, the next 3-4 years will witness a tipping point where EVs may become cheaper to buy than conventional fuel variants,” informed Raja.

Raja further said, “As soon as we had the first e-bike to showcase, T-Hub introduced us to the Asia Pacific Head of Uber who visited Hyderabad at the time. We got an opportunity to demonstrate our e-bikes to them and soon, they were deployed by Uber in Hong Kong, Singapore and San Francisco,”

Charging stations for electric three-wheeler market isn’t viable because most of these vehicles are used for public transportation and last mile commutes. “We have designed our vehicles with modular batteries to swap a depleted battery with a fully charged battery. Our Smart Auto is as powerful as a diesel auto-rickshaw, its high-power motor can go up to a maximum speed of 55kmph and can take a load of 700kg. The vehicle’s running cost is as low as Rs. 0.50/km and offers a range of up to 110 km per charge,” he said.