Next Taiwan president may be a woman Next Taiwan President May Be A Woman. The elections to choose a successor to President Ma Ying-jeou of Republic of China (Taiwan) will be held on 16 January, 2016.

The elections to choose a successor to President Ma Ying-jeou of Republic of China (Taiwan) will be held on 16 January, 2016. As per constitution, President Ma, who is completing his second four-year-term, cannot seek another stint. The 18.5 million eligible voters, who have completed 20 years of age among the 23.4 million people of the island will also elect a Vice President and 113 members to the Legislative Yuan (Parliament) simultaneously.

The four candidates contesting for the top post are Ms Hung Hsiu-chu, the Vice President of the Legislative Yuan and the ruling Kuomintang's (KMT) candidate, Ms Tsai Ing-wen, chairwoman of the opposition Democratic Progressive Party (DPP), Mr Shih Ming-te, former DPP chairman and long time political activist, and Mr James Soong, chairman of the People First Party. The Taiwan Solidarity Union (TSU) won't field a candidate, but will support Ms Tsai. Since the main contest will be between Ms Hung and Ms Tsai, it is almost certain that the country's next president will be a woman. 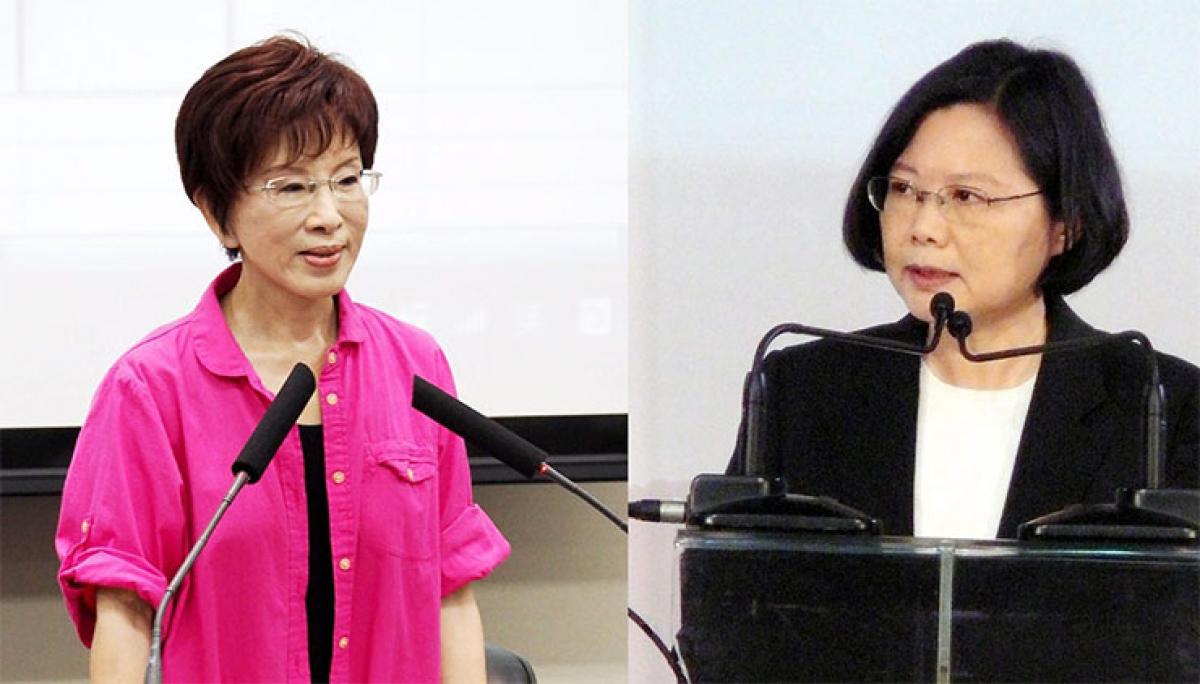 Hung's visions for the nation are equitable wealth distribution, morality, openness and peace while she believes in benevolence, honesty, respect and tolerance.

While declaring to continue the policies of Ma government towards Mainland China, she said: “I will promote peaceful cross-strait development under the guidelines of the ROC Constitution, the 1992 consensus and the KMT political platform, by putting Taiwan and the people first while ensuring dignity and equality.”

In the KMT’s inaugural presidential primary, she surpassed the 30 percent requirement for candidacy, averaging 46.2 percent support in three telephone-based polls comprising 1,200-plus valid responses. A total of 50.7 percent of respondents supported her nomination, while 41.6 percent said they will vote for her.

The opposition DPP, while stressing the need to maintain stable cross-strait relations, which is key to the country's development, has asked Tsai to steer clear of smear tactics and engage in rational discussions on issues affecting the nation and common people.

“We will spare no effort in resolving differences and facilitating mutual understanding with [mainland] China to keep lines of communication open,” Tsai had said at a dinner function with ROC expatriates in Los Angeles. She also discussed the issue with American academics and politicians.

“The US is a staunch ally of Taiwan while sharing the common values of democracy, freedom and human rights,” she said. “This is why I am optimistic our relations will go from strength to strength moving forward,” she said.

Taiwan is a beacon of democracy, Tsai said, adding that it has accrued substantial results over the years in free elections and constitutional politics. “The people and government will strive to keep intact this democratic way of life and allow no changes to the present state of affairs.”

Tsai also said she planned to strengthen social justice while boosting economic growth. “The DPP will seek to reform the nation’s financial and tax systems, creating a more equitable society for all.

“In addition, we are to establish an innovative economic model based on creativity and technology, freeing Taiwan’s industrial sector from the chains of price competition. We shall kick-start a new wave of growth momentum capable of lifting employment and wages,” she added.

Mr Shih Ming-te has so far not come out with an agenda for the polls.

Soong promised to free the nation from a vicious cycle of partisan politics. “Over the last 20 years, Taiwan’s democratic progress has been stuck in a rut, plagued by the shadows of authoritarianism and cutthroat competition between conflicting ideologies,” he said, adding. “Collaboration instead of endless confrontation is our only way out of this mess.”

According to Soong, promoting reconciliation among different parties, seeking cross-party cooperation on sharing power and the responsibilities of state top his list of preferences.

“This is to be achieved by advancing constitutional reform to balance Taiwan’s government structure,” he said. “We need a coalition administration to implement realistic policies by reaching common ground and shared understanding. Winner-take-all politics of the past must be dispensed with,” Soong added.

He is also keen on establishing a sustainable framework for peaceful development across the Taiwan Strait. In addition, he plans to follow the example of former President Chiang Ching-kuo by addressing the people’s needs and consolidating all segments of society.

“What Taiwan requires is someone with experience and resolve at the helm, someone capable of delivering practical solutions to the tough challenges at home and abroad,” Soong said. “This is my vision of a correct and middle path for the nation,” he added.

Soong is contesting for the third time. He previously ran for office in 2000 and 2012, losing to Chen Shui-bian of Democratic Progressive Party and Ma Ying-jeou of the Kuomintang, respectively. In 2004, Soong partnered with the KMT’s Lien Chan, but the pair lost by a margin of 0.228 percent.


This will be the sixth direct election to the posts of president and vice-president. These posts till 1996 were filled by an election in the National Assembly. In a separate set of ballots, the 113 seats in the Legislative Yuan are filled by two methods: 73 are elected in geographical constituency and six in indigenous constituencies using the first-past-the-post system. The remaining 34 are elected by closed list proportional representation in a single nationwide constituency.

President Ma since his election in 2008, set aside the political dispute to start dialogue with Beijing and sign economic agreements. He agreed with China to negotiate on the basis that both sides belong to one China, though with different interpretations.

Hung supports a similar understanding with China, but Tsai's party rejects that basis for talks as a slight to Taiwan's autonomy. Without a framework for dialogue, tensions could rise again, making new agreements difficult. Hung, 67, has been dubbed a "little chili pepper" for her biting, humorous style of grilling government officials in parliament.

Chiang Kai-shek's Nationalists established the government in Taipei in 1946 after losing the Chinese civil war to the Communists.China insists that the two sides should eventually reunite, though opinion polls on the island say majority prefer autonomy.