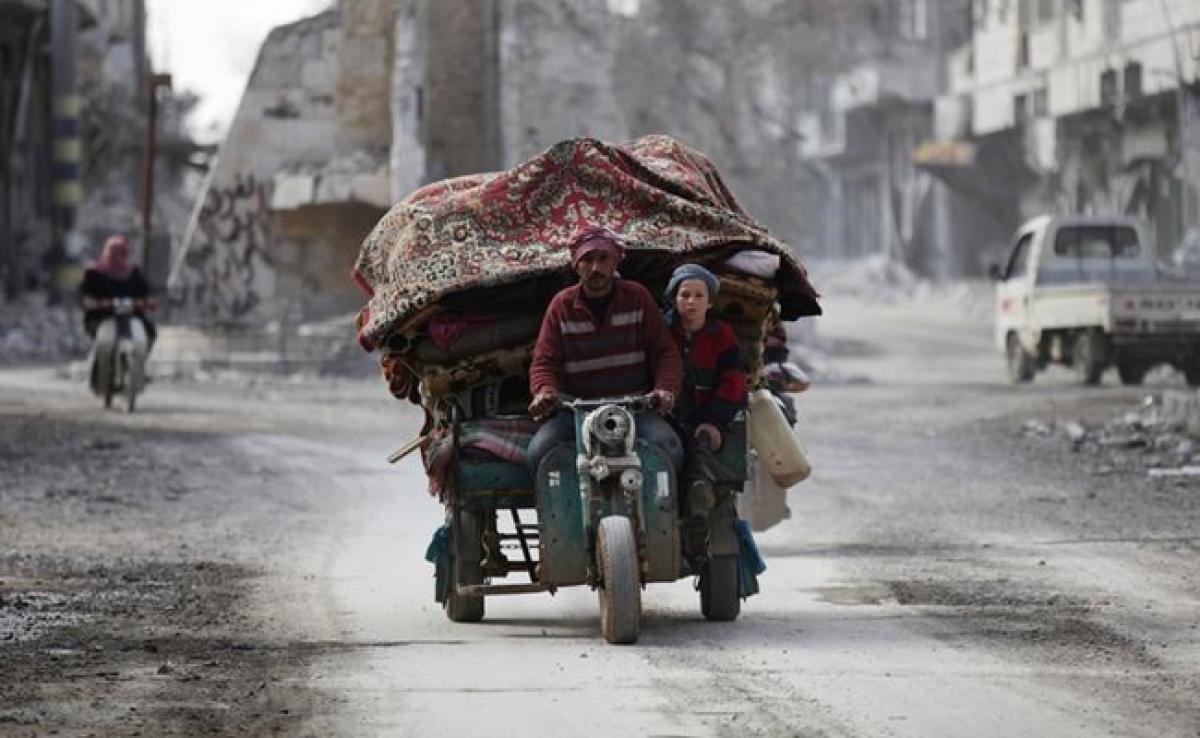 Large parts of Damascus have survived almost six years of conflict in Syria relatively unscarred, but shortages of fuel and electricity, spiralling prices and a lack of jobs mean the lives of its residents are far from unscathed.

Large parts of Damascus have survived almost six years of conflict in Syria relatively unscarred, but shortages of fuel and electricity, spiralling prices and a lack of jobs mean the lives of its residents are far from unscathed.

A series of recent military victories has made the government more secure but done little to alleviate many hardships, evident in the queues of cars snaking out of petrol stations alongside columns of pedestrians with jerry cans.

Meat, once a staple for many, has become a luxury for all but a few and prices are soaring on a thriving black market.

"We are barely managing," said Sufian, a 47-year-old oil engineer speaking at a jobs fair where he was looking for better employment along with hundreds of younger Syrians whose economic prospects have been short-circuited by the war.

"This year I had to borrow money to keep providing for my family," he told Reuters, withholding his full identity.

Such struggles show how hard it will be for President Bashar al-Assad to reassert normality across Syria, even if his opponents' hopes of ousting him appear to have been dashed for now by Iranian and Russian-backed government advances.

Conditions in Damascus - though difficult - are better than in many other parts of Syria, with large districts mostly intact, suffering only occasional bombardment, and with running water restored after it was cut off for weeks earlier this year.

Elsewhere in government-controlled areas, damage has been more extensive, there has been no running water for long periods and fighting makes access to the outside world precarious.

It is also in far better shape than many rebel-held areas, devastated by intense aerial bombardment and critically short of food, water and medical supplies.

Half of Syria's population has been displaced by a conflict whose sixth anniversary falls on March 15. Many have sought shelter in government areas: with friends or relatives, crammed into public buildings like schools or simply living rough.

When Sufian fled his war-ravaged hometown of Sheikh Yassine with his wife and three children four and a half years ago for the comparative safety of his sister's house in Damascus, he left behind a prosperous life and ownership of two houses.

Although both Sufian and his wife retained their government jobs when they fled the war and moved to the capital, inflation has eroded their salaries and they can barely provide enough food for their children, who are adults but unemployed.

The Syrian pound has lost 90 percent of its value since the war began, sending the price of essential imported goods soaring and causing shortages of petrol and fuel for cooking and heating.

"My salary is now less than $100 a month, which is enough for only four days," Sufian said, his green eyes and facial expressions revealing more distress than he could describe.

The Damascus fuel queues are evidence of shortages that have become particularly acute during one of Syria's harshest winters for years and that can be alleviated only for those willing to pay the 100 percent mark up on the black market.

"This is a country of miracles," was the bitterly ironic verdict of Bahjat Yassine, 65, a retired soldier living in the suburb of Jaramana.

"There is no heating and no fuel oil at the state-run distribution centers. But they are abundant in the free market. How come?" he said, while waiting at a local workshop for the repair of a tiny gas heater that he could afford to replace.

Unable to heat their homes with gas, Syrians have resorted to cheaper resources like wood. On a patch of open ground in Jaramana, 35-year-old Abed was chopping wood to sell by the side of the road and loading it into a waiting truck.

He has twice as many customers as he did in the past, he said, because Damascenes are converting old heaters to run on wood - or even garbage that gives off noxious fumes - instead of the more expensive fuel oil.

"I saw displaced people in tents feeding their heaters cardboard, nylon and even diapers," he said.

Mariam, 55, who as shopping for vegetables at an open market in Bab Srijeh, said she had few choices: "God will not abandon us. When we feel cold we cover ourselves with blankets and get warmth from the sun."

At night, Damascus plunges into darkness and life quickly withdraws from its streets. Shops and snack bars whose owners cannot afford a private electricity generator close in the early evenings even in districts that once throbbed with pedestrians shopping or lingering in shisha cafes and restaurants.

"Syria had one of the strongest power systems in the region, prior to the crisis," Electricity Minister Zuheir Kharbutli told Reuters in an interview.

Now, power cuts extend nearly 15 hours a day thanks to fighting that has destroyed vast parts of Syria's infrastructure and left natural gas fields that supply the country's electricity plants in the hands of the government's enemies.

For women like Imam, 60, that means moving fast. "We get barely two hours of electricity after every four hours. We rush during these two hours to do the laundry, charge the batteries of the portable lights and other necessities," she said.

Syria's generating capacity has collapsed to 1,400 megawatts from 8,500MW before the war, Kharbutli said, and only one of the country's eight gas fields can still supply the faltering power plants that are controlled by the state.

"We only produce 27 percent of our (electricity) needs," he said.

Before the war, many families used to gather at weekends to drive into the countryside and sit outdoors, filling the air with the smell of barbecuing meat. That has become a luxury few can now afford.

"We get along now without outings or having fun or buying new clothes or even medical treatment... We used to go out every Thursday night and Friday. We've stopped doing all that. We only get the necessities," Iman said.

"Look: I can't do my hair anymore because of the electricity outage."

Adel Awwad, 75, has replaced meat with chicken, stressing the benefits of a decision made for the sake of his wallet.

"Salaries are no longer sufficient for people from all social levels. One kilogram of meat costs 6,000 pounds ($11.07). I dropped meat from my menu, and we now eat chicken to balance the budget. Chicken meat is healthier," he said.

Agriculture, industry, tourism and oil production, once the country's economic pillars, have all suffered greatly during the war, but at least the government has continued to pay salaries, Suleiman said.

"Prices are high and increasing every day, but what can we do? Raqqa, Hasake, Daraa, Idlib and the coastal area were the centre of crop production. The first four provinces are out of control," he added.

Assad's success in regaining the second city of Aleppo late last year means his rebel opponents now have almost no chance of ousting him, but the war is far from over and large parts of the country may remain outside his control for a long time to come.

For Sufian, the oil engineer who fled his home in Sheikh Yassine for a reduced existence in Damascus, there is still enough to stay for.

"My children asked me to emigrate but I refused. I won't leave the country unless my life or my family's lives are threatened. For now, I'm fighting to keep a little room for hope within all the darkness surrounding us," he said.