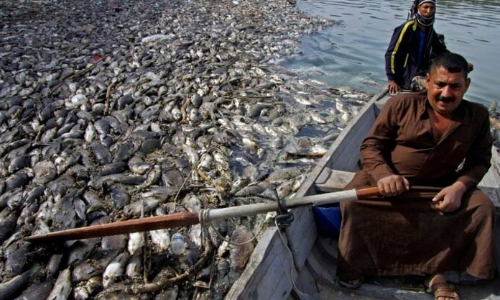 The sudden death last year of millions of Iraqi carp, used in the countrys signature dish, was caused by a strain of herpes harmless to humans, the United Nations said Wednesday

Baghdad: The sudden death last year of millions of Iraqi carp, used in the country's signature dish, was caused by a strain of herpes harmless to humans, the United Nations said Wednesday.

Iraqi fish farmers south of Baghdad were left reeling in late 2018 after piles of dead carp were found washed up on the banks of the Euphrates River or floating in their cages. Rumours swirled over whether the fish were sick or the river had been poisoned, and Iraqi politicians put the issue at the top of their agenda. On Wednesday, the United Nations Environment Programme (UNEP) said a months-long international investigation had pinned down the slippery source: the Koi Herpes Virus.

"KHV is a very serious and lethal disease that is known to cause almost 100 percent mortality rates in carps," said Dr. Thomas Wahli, who heads the Swiss Reference Laboratory for Notifiable Diseases. Flame-grilled carp seasoned with sauces made from onions and tomato and known as masgoof, is Iraq's national delicacy. The mass deaths in the fish farms of Saddat al-Hindiyah in Babylon province, about 80 kilometres south of Baghdad, had panicked carp farmers, who said they had lost thousands of dollars overnight.

Samples of the dead fish, water, sediment and feed were sent to Wahli's lab as well as facilities in Jordan and Italy. They confirmed the carp were killed by the viral outbreak, which does not pose a threat to humans, the UN said. Temperatures in the Euphrates dropped to around 24 degrees in November, a prime environment for KHV. The overstocking of fish farms and low-quality river water may have also spread the disease further, it said. Iraq produces 29,000 tonnes of fish each year, according to 2016 statistics gathered by the United Nations' Food and Agriculture Organisation.

"This is the first case of Koi Herpes Virus disease in Iraq, and it is a significant case report which will need to be notified to the World Organisation for Animal Health," Iraq's Environment Minister Ala Alwan said. "We are pleased to have been able to get to the bottom of this difficult case," Alwan added.