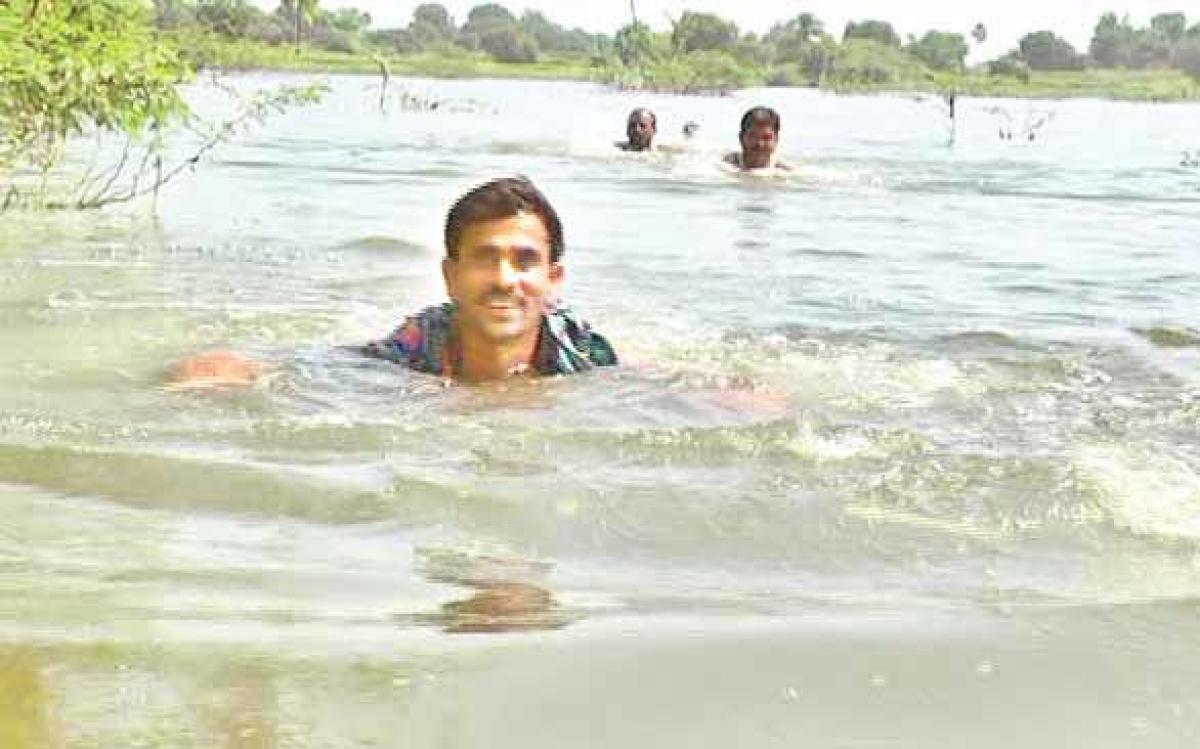 In 2006, the then government constructed Mylaram balancing reservoir in Rayaparti mandal. The officials acquired 400 acres in Kondoor and paid compensation to the farmers. The officials identified another 100 acres dry land but paid no attention to it. The dry land is being cultivated by over 60 farmers.

Warangal: It may sound strange, but it is true. Apart from tilling the lands for cultivation, farmers in this village should also know how to swim or how to operate a country raft. The village - Kondoor in Rayaparti mandal of Warangal rural district – is facing a peculiar problem. They have to use a raft or brave the swelling water by swimming across a reservoir as the village has no land route to reach their fields.

In 2006, the then government constructed Mylaram balancing reservoir in Rayaparti mandal. The officials acquired 400 acres in Kondoor and paid compensation to the farmers. The officials identified another 100 acres dry land but paid no attention to it. The dry land is being cultivated by over 60 farmers.

As there is no land route, the farmers are using country rafts to negotiate the reservoir to reach their lands. In case of some others, they are swimming across the reservoir to reach their lands, which are just one km away, putting their lives at risk. To bring agricultural products home, they are facing umpteen numbers of problems. The farmers expressed their agony as there is no pucca road to the fields to The Hans India.

A farmer, Velpula Buchchaiah, lamented that the officials were not bothering to find a solution to the villagers’ problem of crossing the reservoir.
The farmers said the problem remained unresolved in spite of several rounds of representation made to offices of elected people’s representatives.

Another farmer, Aakutota Sudhakar, said that they had been using country boats to reach their fields. Velpula Ramireddy, another farmer, demanded construction of a bridge or else asked the government to buy their lands.

The farmers are finding it difficult to bring the harvested crops – paddy, maize and cotton – home. The farmers said they had brought the issue to the notice of Warangal District Collector Prashant Patil during Prajavani.

The SRSP officials say that they have no powers to release water from the balancing reservoir as they stored water in the reservoir on directions of the government. When The Hans India brought the problem to Palakurti MLA E Dayakar Rao’s notice, he said he would take initiative to render justice to the farmers. He said he had already brought the issue to the notice of Major Irrigation Minister T Harish Rao.