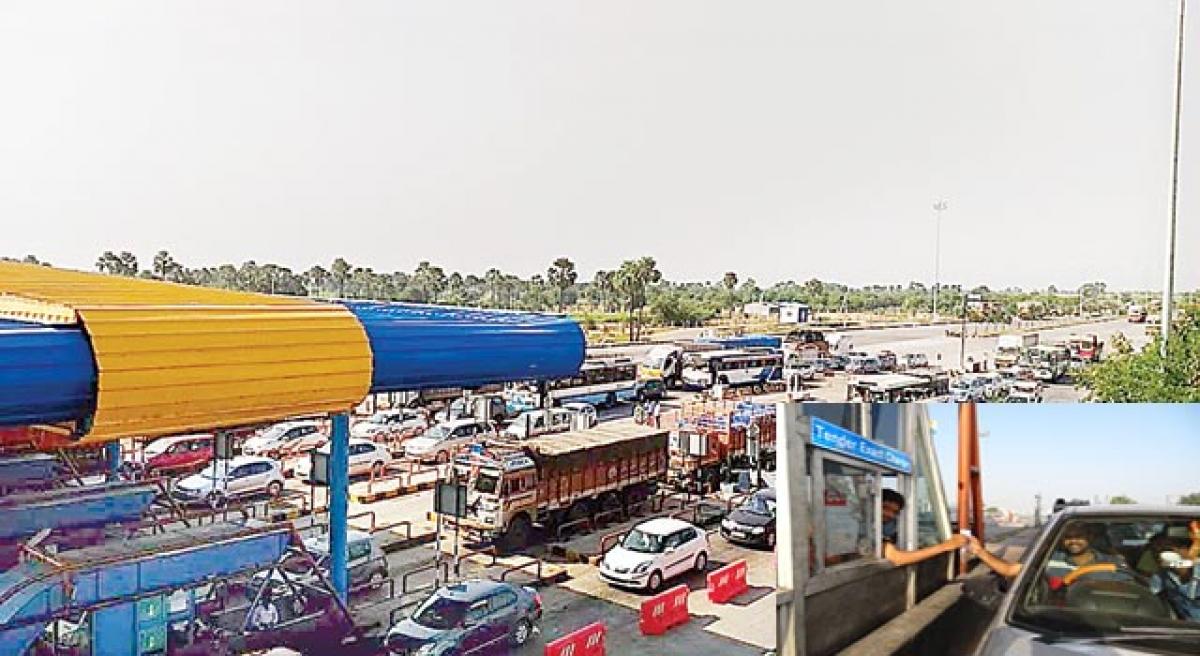 However, the situation at the toll plaza near Guduru on the National Highway 163 was different altogether. Moreover, it reminded the old folklore...

Nalgonda: Before the Highways Ministry suspended the toll collection on Wednesday evening, the toll plazas across the State witnessed all kinds of chaos with commuters tendering the scrapped 1,000 and 500 rupee notes and the toll staff refusing to accept them.

However, the situation at the toll plaza near Guduru on the National Highway 163 was different altogether. Moreover, it reminded the old folklore movies in which bags of coins used as monetary exchange. The plaza runners appeared well prepared as they returned coins packed in a polythene sachet to those commuters, who tendered Rs 500 or Rs 1,000 for toll fee.

Elsewhere in Nalgonda and Suryapet districts, vehicles queued up at the toll plazas with almost all the commuters offering the demonetised currency notes.

Initially, the staff at some toll plazas refused to accept both the denominations, but when they started to take them, they quickly ran out of paper money, especially of Rs 100 denomination. This led to arguments between the commuters and toll staff.

The toll staff at Korlapahad under Kethepally mandal in Nalgonda said the commuters who demanded them to accept the scrapped notes were not ready to accept Rs 500 notes.

Everywhere the phenomena was same as people wanted to exhange Rs 500 and Rs 1,000 notes for Rs 100 and Rs 50 as the ATMs and banks remained closed on the day.

On the other hand, although the petrol bunks readily accepted the banned currency notes, the bunks too came under intense pressure with everyone offering the high denomination notes just to get one or two litres of petrol or diesel.

As a result, the bunk staff asked the customers to get their vehicles filled with fuel to the tune of Rs 500 or Rs 1,000 as they don’t have change to return.

The demonetisation effect landed the petty and medium-level businesses in a no man’s land. They were neither in a position to accept the scrapped notes nor have required paper money to go ahead with business. Some hospitals, medical shops and provision stores refused to accept the notes.

Srinivas S, a provision store owner in Hanamkonda said: “I have no fear to accept the notes, but certainly it could be a herculean task to stand in queue to deposit them when the banks start to accept them. As it would take a few days, it’s difficult for me to run my shop without finances.”