No classrooms, nature’s lap their only resort 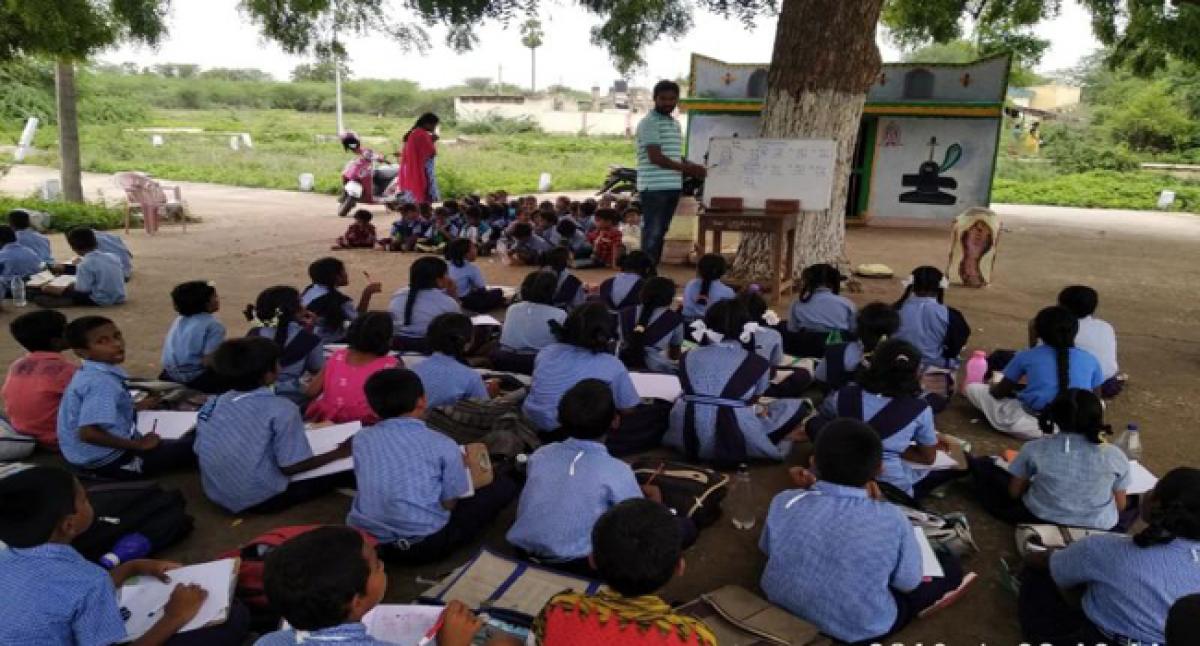 Delay in construction of new classrooms at the Government Primary School in Warangal Fort area is compelling teachers to take classes outdoor under the shade of a neem tree.

Warangal: Delay in construction of new classrooms at the Government Primary School in Warangal Fort area is compelling teachers to take classes outdoor under the shade of a neem tree.

To accommodate increasing strength of students, construction of six new classrooms, three each on ground and first floors, with an expenditure of Rs 45 lakh was proposed. On Sep 17, 2017, Warangal (East) MLA K Surekha laid the foundation stone for the works.

The basement was laid and pillars were raised but works came to a halt four months ago though the works were supposed to be completed by the beginning of this academic year. The reason is allegedly the non-payment of bills to the contractor executing the works.

When contacted, the school headmaster M Raj Kumar and the staff there told The Hans India on Friday that they were not aware of the reasons why construction was stopped. Only two rooms are available now at the school with a strength of 215 students and one room is used as office room, staff room, store room as well as kitchen and also as classroom.

“Since we cannot accommodate all students in just two rooms, we are compelled to run the classes outdoor. We have no other option at all,” teachers Srinivas and Raja Kumari said adding that the problem got confounded when it rained as all the students were forced to sit in two rooms.

The school located at the Middle Fort area having good number of Muslim students is facing another peculiar problem while running classes under the shade of the tree. By the side of the tree, there is Mahankali Temple whose outer area with cement floor is used to run classes.

Many students and their parents are objecting to classes conducted beside the temple. School headmaster Raj Kumar and the staff conducted admission campaigns and increased the strength to 215 now from 50 students four years ago. Their efforts to increase the strength have inadvertently thrown them into a trouble.

Responding to their campaign, many parents are still queuing up at the school seeking admission. “We are unable to admit new students due to lack of class rooms and parents are questioning us for not taking children and some are even scolding us,” they lamented.

“The government claims of equipping schools with required classrooms and amenities. Our children are sitting on the ground. Without basic amenities how can children have access to quality education?” asked a resident B Madhavi. She asked the Education Department to look into the matter and address it forthwith.