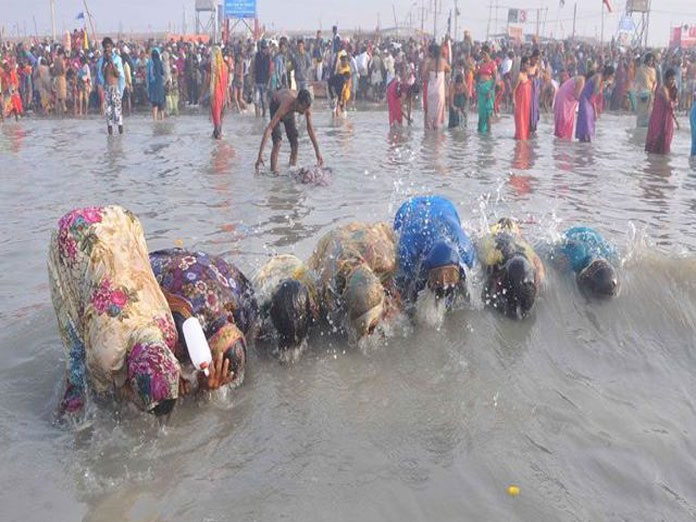 Thousands of people took holy dip and offered prayers to the Sun God at Chandrabhaga beach near Konark of Puri district early Tuesday on the occasion...

Bhubaneswar:Thousands of people took holy dip and offered prayers to the Sun God at Chandrabhaga beach near Konark of Puri district early Tuesday on the occasion of annual "Magha Mela" held on the Magha Saptami day.

People take holy dip on the seventh day of the new moon of "Magha" month with a belief that it will cleanse their sins and get them rid of skin diseases. The day is also observed as the birthday of the Sun God.

According to mythology, Lord Krishna's son Samba was cured of leprosy by offering prayer to the Sun God at the Chandrabhaga beach.

The holy dip started after the completion of rituals at 4.10 am.

Besides the Sun God, the devotees also worship Lord Shiva at the "bank" of presently non-existent Chandrabhaga river, about two kilometre from the Sun Temple at Konark, during the Magha Mela.

In the festival, there is a ritual of preparing cooked rice, dried fish and 'dalma', a traditional food of the state, which is offered to mythological demon Arkasura.

Earlier, Konark and the surrounding areas were used to be known as Arka Kshetra after Arkasura.

The administration has made elaborate security arrangement at Chandrabhaga beach.