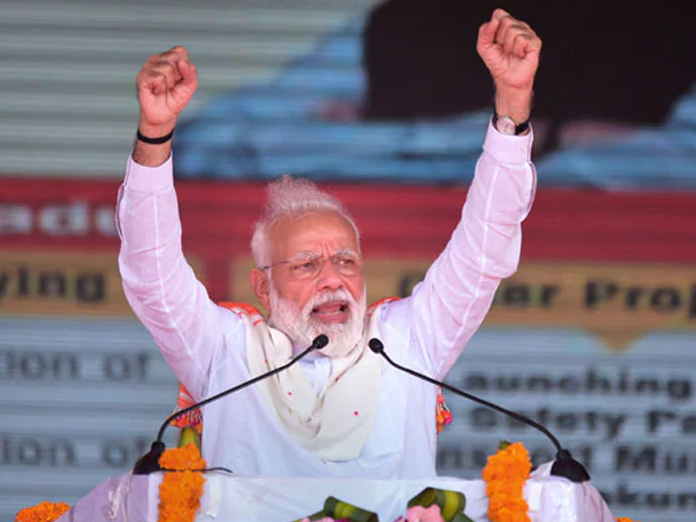 Prime Minister Narendra Modi has taken the Narasimha avatar, Tamil Nadu Deputy Chief Minister O Panneerselvam said on Friday, likening him to the incarnation of Lord Vishnu as he and chief minister K Palaniswami praised the Prime Minister for decimating terrorists in Pakistan in air strikes

Panneerselvam said PM Modi did not buckle under the threat of terrorism and instead had taken the "Narasimha avatar", a reference to Hindu faith in which Lord Vishnu takes the ferocious incarnation in the form of human body with the head of a lion to destroy demon king Hiranyakasibu.

"Without buckling under the threat of terrorism of the neighbouring country, PM Modi took Narasimha avatar and decimated hundreds of terrorists which the world lauded," he said at a function in Kanyakumari where the Prime Minister dedicated to the nation various highway and railway projects in Tamil Nadu.

He was referring to the February 26 predawn air strikes on a terror camp in Pakistan days after the killing of 40 CRPF jawans by a Jaish-e-Mohammed suicide bomber in Jammu and Kashmir.

The Deputy Chief Minister praised PM Modi for his "strong and steadfast leadership," in battling external threats in a bold and decisive manner without a wink of sleep.

Such resolute steps were a warning signal to countries that supported terrorism, he noted.

Speaking after his deputy, Palaniswami hailed PM Modi for bold and decisive measures to root out terrorism.

"On behalf of the people of Tamil Nadu, I thank the Prime Minister for the bold and decisive measures to root out terrorism, which is threatening the world and the successful air strike to decimate the terrorist camps."

"Entire country and Tamil Nadu stands behind you," the Chief Minister said referring to PM Modi.

This is the first time, the top two leaders of the AIADMK joined the Prime Minister in an official event after their party inked a poll pact with BJP on Feb 19 for the coming Lok Sabha elections.

Palaniswami requested PM Modi to establish a naval station at Kanyakumari for ensuring the safety and security of fishermen.

Today's event was a "beginning to the Himalayan victory," he said in an apparent reference that the AIADMK-BJP combine will emerge victorious in Tamil Nadu in the upcoming Lok Sabha elections, the Deputy Chief Minister said.