Punya to you, pollution to me Punya to you, pollution to me. When crores of people took dip in Godavari during Pushkaram, several lakhs of harmful micro-organisms transmitted into the river, which go on distributed for some time to come. 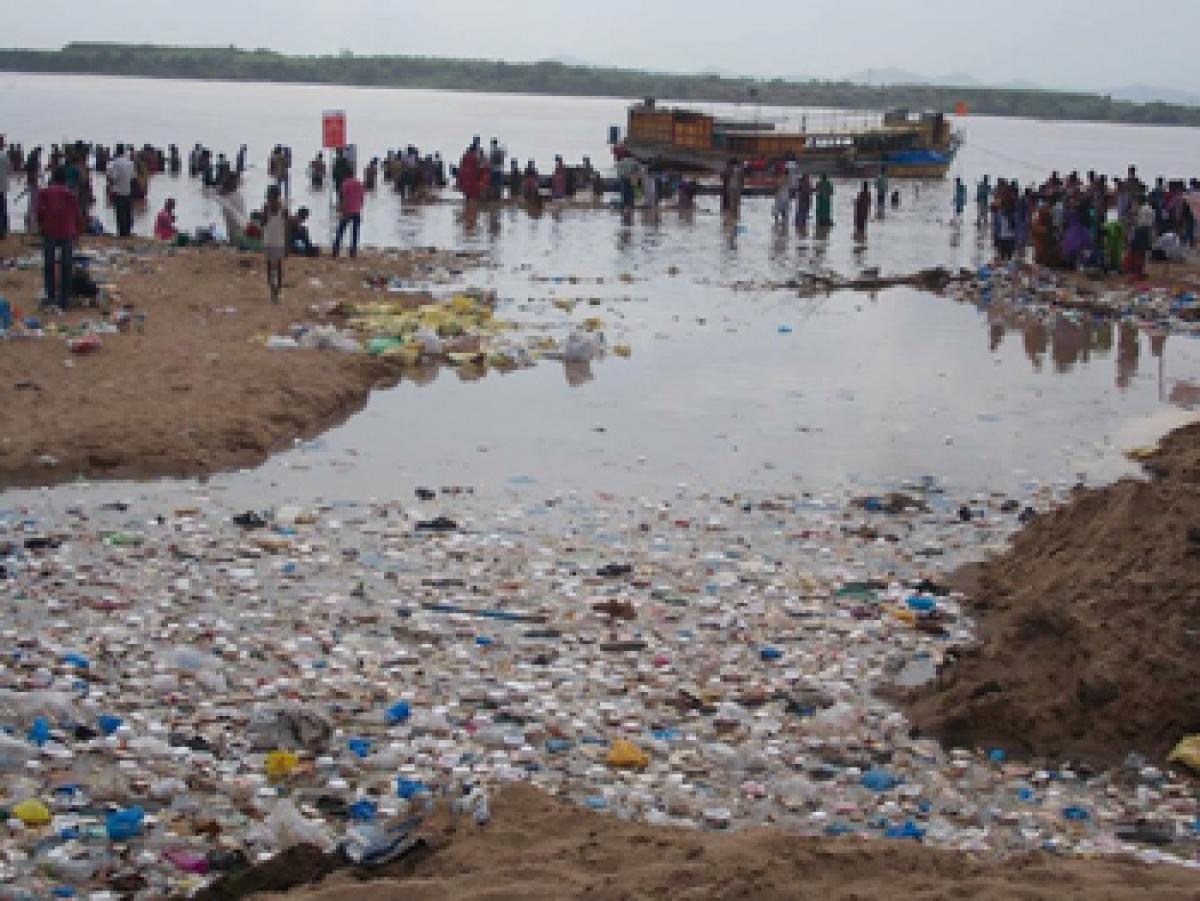 One need not do any extra effort to purify a river; it is enough if people do not pollute it. Dropping flowers, fruits, turmeric and vermillion may not disturb. But cloths, papers, polythene bags, shampoos, soaps, detergents, in such high proportions, would certainly injure it. Increased urbanisation and industrialisation also cause stress on the self-purification mechanism of rivers

When crores of people took dip in Godavari during Pushkaram, several lakhs of harmful micro-organisms transmitted into the river, which go on distributed for some time to come. Bathing without clean undergarments, washing clothes with soaps will pollute more.

We call it ‘worship’. Pushkaram should have been an occasion for the governments, people as well, to bring back Godavari to its natural purity. Had Godavari been endowed with voice, it would have said: “Punya to you and pollution for me?” One need not do any extra effort to purify the river; it is enough if they do not pollute it.

Dropping flowers, fruits, turmeric and vermillion may not disturb. But cloths, papers, polythene bags, shampoos, soaps, detergents, in such high proportions would certainly injure it. It is a disrespect, disturbance and pollution. Godavari is the source of drinking water for lakhs of towns and villages en route several States.

Warnings, prohibitions and preaching could not make most people diligent and responsible. Universities should have studied the quality of water in river before and after pushkaram to help governments take preventive steps for the coming Pushkarams – 12 major rivers in India have pushkaram once in 12 years, which means one every year.

Purity of Godavari in Nasik got gradually diminished as impurities joined on its way forward. If States want to really respect the sentiments of people and worship the river, they should prohibit mixing of industrial refuse, as Pushkaram gift. No such thing happened.

Life sciences are about life and living of human beings in symbiosis with the nature. Unless humans live naturally, it will not be possible to make constructive use of natural resources. Mahatma Gandhi said: “Earth provides enough to satisfy every man's needs, but not every man's greed.” River can withstand normal pollution but not this extreme level of dumping in the name of 12-day carnival.

To know the national responsibility of any country, industrial development is one of the important criteria is to judge the progress. Aurangabad city, blessed with Godavari, witnessed tremendous growth in pharmaceutical, agro-based and beverage industries etc. Effluents caused deterioration of the water quality and river faced a serious threat not only to its own health but also to community development of this water source.”

Writers explained: “Increased urbanisation and industrialization caused stress on the self-purification mechanism of rivers (Patil & Ghorade 2013).” Advances in science and technology have produced many new compounds released into the watery environment and produced new water problems. Our need for quality water is growing rapidly.

Giving details of chemical process of polluted water in human body, these two writers said: “When water containing CO2 is used for drinking purpose, then it is absorbed very slowly through the gastrointestinal tract, at a much lower rate than it is produced in cells and expired out of the lungs. The gas expansion from release of dissolved CO2 in carbonation can lead to the distension of the stomach” (Jadhavar, 2013).

Aside from the less serious case of triggering hiccups, irritable bowel syndrome (IBS) can also be aggravated. Furthermore, the stomach distension may reduce the effectiveness of stomach acid to digest food that requires sufficient acidity. Sufferers of IBS are advised to eliminate carbonated drinks from their diet (Kasthuri, et al., 2005).

This article listed the consequences of these rivers joining the ocean: Carbon dioxide (CO2 ) released into the oceans as a result of water pollution by nutrients which is a major source of this greenhouse gas, gets little public attention. It enhances the unwanted changes in ocean acidity due to atmospheric increases in CO2.

Atmospheric levels of CO2, the main greenhouse gas, have increased by about 40 per cent since the industrial revolution due to the burning of fossil fuels and land-use changes. The oceans absorb about one-third of that CO2, which results in acidification from the formation of carbonic acid.

However, pollution of ocean water with nutrient runoff from fertilisers, human and animal waste and other sources also is adding CO2 via the biological breakdown of organic matter formed during algal blooms which also depletes oxygen from the water.

Two writers added: “The contamination of river water from the manmade and natural sources is causing a great threat to the ground water system. The disposal of these waste and wastewater without proper treatment on unlined surface is finding its way to groundwater through percolation.”

The increase in use of chemical fertilisers, insecticide and pesticide in agricultural field has also contaminated the river water. This study talks about water quality in Aurangabad city only. One can estimate the amount of pollution in other towns and cities along the river in other states.”

We are using river as drain to transport industrial refuse to nearby ocean. We treat ocean as a big dump yard. The boat expedition in Godavari between Bhadrachalam and Rajahmundry via Papikondalu takes the ‘pollution into the centre of river.’ It will be disgusting to note that the machine boats with a/c rooms and lavatories are directly sending human refuse into the river.

We have almost killed Hussain Sagar in Hyderabad, and are attempting to kill some more tanks in city and villages in our festive fervour of Ganesh with plaster of paris covered by poisonous chemical colours. Environmental festivals turned into threats to environment. We all citizens have a duty as per the Article 51-A (h)of Indian Constitution “to develop the scientific temper, humanism and the spirit of inquiry and reform.”