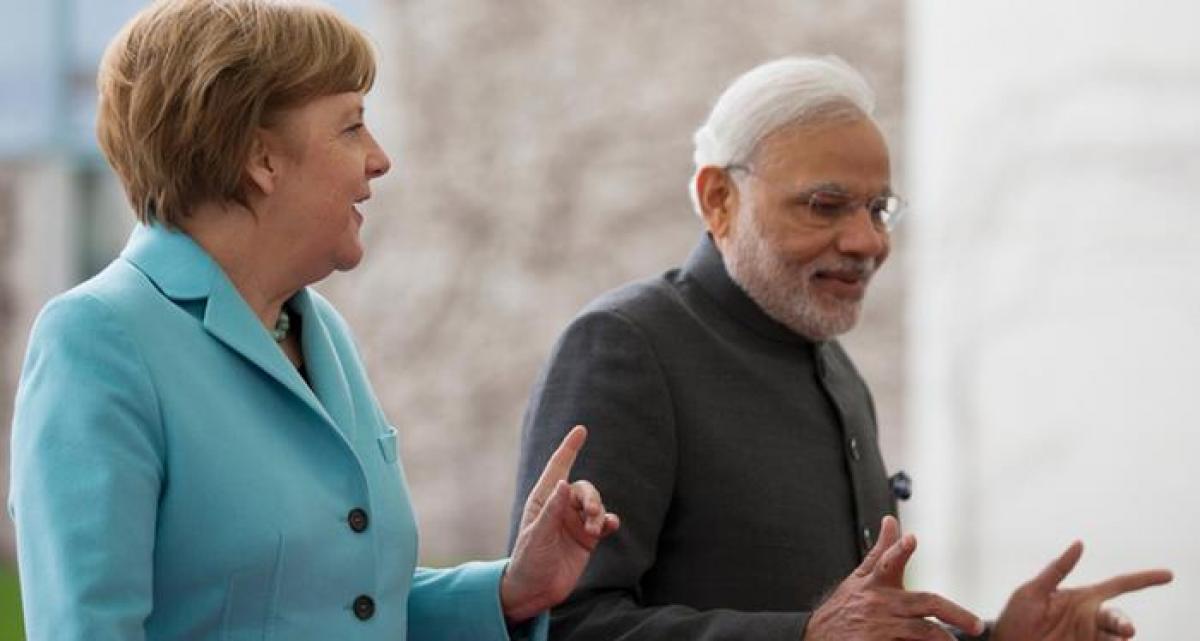 Angela Merkel began her visit to India Monday with the spotlight on trade, as Prime Minister Narendra Modi looks to the Teutonic powerhouse for investment and to glean insights from its manufacturing prowess.

Angela Merkel began her visit to India Monday with the spotlight on trade, as Prime Minister Narendra Modi looks to the Teutonic powerhouse for investment and to glean insights from its manufacturing prowess.German Chancellor Angela Merkel was accorded a ceremonial welcome at Rashtrapati Bhawan in New Delhi on Monday. Briefly leaving behind a refugee crisis in Europe where her leadership has sparked whispers of the Nobel Peace Prize, the German chancellor landed in New Delhi late Sunday for a three-day visit.
She will meet with Modi, President Pranab Mukherjee and trade officials on her first trip to India since the right-wing Bharatiya Janata Party stormed to power last year.
"Prime Minister Modi and Chancellor Merkel will hold discussions on a wide range of issues of mutual interest," the Ministry of External Affairs said in a statement, adding that trade, defence and renewable energy were among the topics on the menu.
Germany is already India's most important trading partner in Europe and both Modi and Merkel have said they are keen to boost two-way trade.
But for Germany, Europe's largest economy, India last year ranked just 25th on the list of countries with which it does business.
The two nations exchanged nearly 16 billion euros ($17.9 billion) in trade in 2014 -- mostly chemicals, machine tools, electrical goods and textiles -- but the figure has declined in the past three years.
"That obviously has growth potential," a German official with knowledge of the trip said.
The leaders met in April on Modi's first official visit to Germany, where he sought to draw more of its investment clout towards the subcontinent and his flagship "Make in India" campaign.
Germany agreed to lend India some of the vocational education expertise that has turned it into an engineering giant, with skilled workers crucial to Modi's ambitions for the manufacturing sector.
This week's Berlin delegation includes the Foreign Minister Frank-Walter Steinmeier, several cabinet ministers and German business leaders, who will travel to the southern technology hub of Bangalore after the stop in Delhi.
It comes as Modi's relentless foreign tour aimed at wooing economic powers -- dubbed Modiplomacy -- appears to possibly be paying dividends on the investment front.
India overtook China to top the league table for greenfield foreign direct investment (new ventures) in the first half, pulling in $30 billion in estimated capital expenditure, according to a Financial Times analysis.
German investments in India stand at 9.7 billion euros with about 1,600 companies in the country, where the chemistry, energy and pharmaceuticals sectors are of greatest interest.
Indian media reports say Merkel and Modi may discuss resuming stalled India-EU Free Trade Agreement negotiations -- a market-opening pact to boost bilateral commerce.
While any trade deals are still hush-hush, one agreement has been made concrete -- Germany's decision to hand back a 9th-century statue of the Hindu goddess Durga last month.
Merkel is expected to visit the statue, which the Stuttgart Linden museum had bought at auction but decided to voluntarily return after it was found to have been looted from Kashmir in the 1990s.
Show Full Article
Email ArticlePrint Article
More On