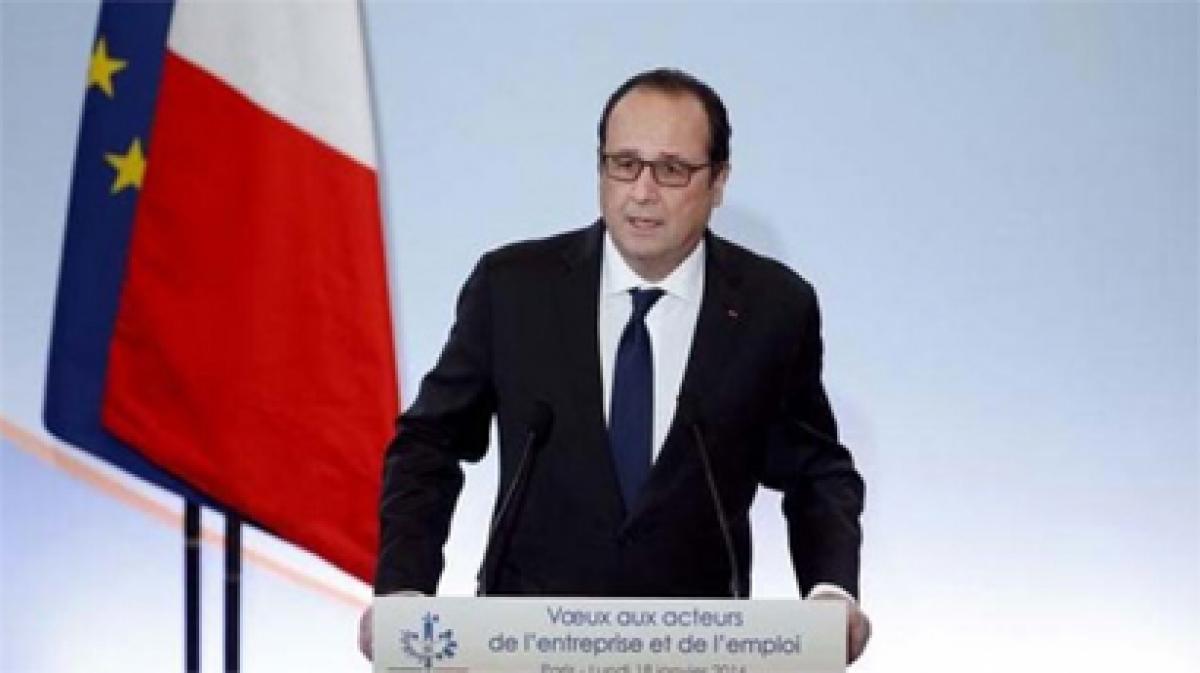 French President Francois Hollande will today commence his three-day India visit from Chandigarh where he, along with Prime Minister Narendra Modi, will attend a business summit and visit various landmarks.

French President Francois Hollande will today commence his three-day India visit from Chandigarh where he, along with Prime Minister Narendra Modi, will attend a business summit and visit various landmarks.

Heavy security arrangements have been made in the city where the two leaders will attend the India-France Business Summit attended by the corporate honchos of the two nations.

Accompanied by a high-level delegation, President Hollande will land around 1 pm in Chandigarh.

He will be accompanied by PM Modi during the sightseeing to the most frequented tourist spots -- Rock Garden, Capitol Complex, and Government Museum and Art gallery. They will spend close to 15 minutes at each of the three sites before attending the business meet at a hotel, officials said.

Later in the evening, the leaders will fly separately to Delhi, where President Hollande will attend the Republic Day parade as the Chief Guest and hold talks with PM Modi. During the talks, ways to strengthen counter-terror cooperation in the aftermath of Paris and Pathankot terror strikes is likely to figure prominently.

President Hollande will be the fifth French leader to be a Chief Guest at India's Republic Day celebrations -- the maximum number from any country so far. Earlier, leaders from France had graced the occasion in 1976, 1980, 1998 and 2008.

Significantly, for the first time, French soldiers will march down the Rajpath on Republic Day along with Indian troops, a first for any foreign army.

In Chandigarh, security personnel from Punjab, Haryana, the Union Territory of Chandigarh and para-military ITBP jawans have been deployed in strength at all vital installations, the officials said.

However, the UT of Chandigarh Administration has decided not to put any restriction on the movement of people during the high-profile visit tomorrow.

"There will be no restriction on the movement of people in Chandigarh. Moreover, no road will be closed for long duration during the high-profile visit. No tourist spot will also be closed for visitors," said a senior official in UT Chandigarh Administration.

During the visit, France is likely to sign a Memorandum of Understanding (MoU) with Chandigarh for helping it develop as a smart city, official sources said.

Last year, France had committed to help three Indian cities - Chandigarh, Nagpur and Puducherry - to be developed as smart cities. Chandigarh is competing for making to the list of the first 20 cities to be picked by the Ministry of Urban Development for funding in year 2016-17 under the Smart City project.

PM Modi and President Hollande scheduled to visit Government Museum and Art Gallery after visiting the famous Rock Garden in the city.

Then, both leaders will attend forum of select CEO's to be followed by the India-France Business Summit at a local hotel, as per the schedule.