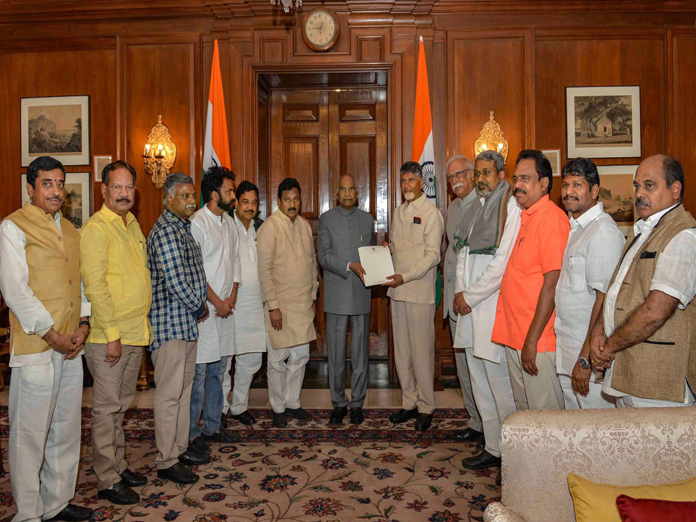 There may be a Grand Alliance at the national level even before the Lok Sabha elections between parties like the Congress, TMC, AAP and TDP, Andhra Pradesh Chief Minister N Chandrababu Naidu said here on Tuesday

New Delhi: There may be a Grand Alliance at the national level even before the Lok Sabha elections between parties like the Congress, TMC, AAP and TDP, Andhra Pradesh Chief Minister N Chandrababu Naidu said here on Tuesday.

He also said that other secular parties would join the alliance after the elections because of some State-level differences at present. Naidu, who was here for staging a protest against the Modi government for not giving Special Category Status to Andhra Pradesh, told a group of editors that national interests will make the parties come together.

“Why not,” he shot back when asked whether Congress and AAP would go together in the Lok Sabha polls in Delhi. “There is a secular compulsion for the parties to tie up with each other to defeat the BJP,” he said, suggesting that final tie-ups would materialise after the election.

Naidu gave the example of the Left parties not having a pre-poll alliance with the Congress but going for post-poll adjustments in the past. To a question whether the anti-BJP parties would get their numbers to form the government given the fact some of them would be fighting against each other in some States, he countered: “Where is the BJP going to get the numbers?”

In the south, where he said the BJP had done injustice to all the States, the party was not going to get any seat. Also, it would be losing heavily in the States where it had done extremely well in the last elections. “Where is it going to make up for these numbers,” he said.

Asked about the BJP's campaign that the Opposition had no PM material compared to Modi, Naidu retorted: “Anyone other than Modi will perform better.”

To a question about the possibility of Odisha Chief Minister Naveen Patnaik taking the side of the non-BJP Opposition, Naidu said Patnaik would decide that later.