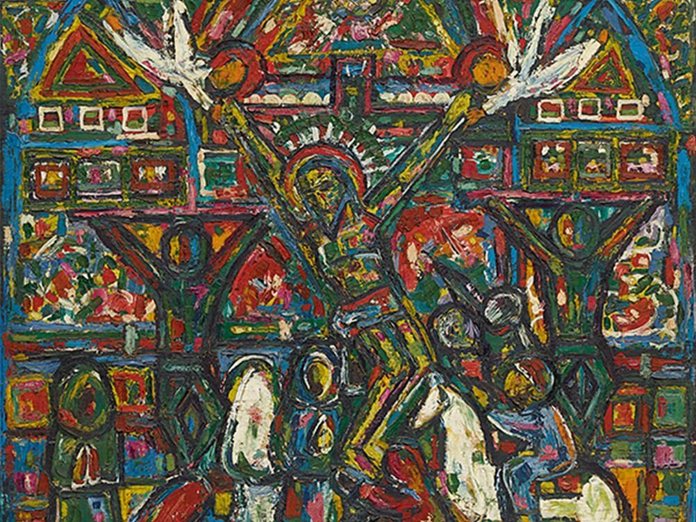 The story behind an artwork is key to understanding it, and a 1948 work by highlycollected Goan modernist painter FN Souza gives a glimpse into the religious imagery of Goa of that time, when the state was still under Portuguese rule

New Delhi: The story behind an artwork is key to understanding it, and a 1948 work by highly-collected Goan modernist painter F.N. Souza gives a glimpse into the religious imagery of Goa of that time, when the state was still under Portuguese rule.

"Golgotha in Goa", a rare painting from Souza's formative years, adopts its formal composition from the altar at Golgotha, Jerusalem, the place where Christ was crucified. It will lead a New York Sotheby's auction on March 18 and is currently on preview in Delhi in Hotel Leela, among other works, till February 16.

"Souza was an incredibly prolific artist across his nearly seven-decade career.

Works from his formative period remain incredibly rare - less than 20 paintings by him from the 1940s have ever appeared at auction," Manjari Sihare-Sutin, Sotheby's New York Head of Sale for modern and contemporary South Asian art said.

Souza sold this work to a fellow Goan, a collector with a very fine eye and love for the Konkan state, as Souza had; this work remained in the private collection for two decades, she added.

Despite being vocal and critical about the church, clergy and corruption in his later years, Souza created hundreds of paintings and drawings with religious iconography.

"The title 'Golgotha in Goa' suggests that while this scene is rooted in Goa, it is a reflection of Golgotha nonetheless. Goa was at the time a Portuguese colony where Catholicism was the main religion, so it is very likely that elements from the altar at Golgotha were also incorporated in local churches," Sotheby's said in its note on the painting.

Three large sconces envelop the altar at Golgotha and gold squares containing icons and paintings make up the background - all perfectly mirrored in the present painting, it added.

The mosaic-like painting is also reminiscent of traditional stained-glass illustrations found in churches.

Five canvases by M.F. Husain, a semi-abstracted work by Ram Kumar, a Zainul Abedin work from 1970 and an untitled painting by S.H. Raza will also feature in the sale. They are part of a two-day public exhibition in Delhi that ends on Saturday.