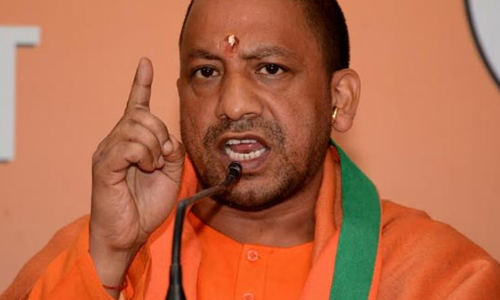 Says indiscipline will not be tolerated

Lucknow: Uttar Pradesh Chief Minister Yogi Adityanath on Thursday said indiscipline will not be tolerated in the party -- a day after two elected representatives of the ruling BJP came to blows during an official meeting.

The fight, caught on tape, took place during a meeting at the district collectorate in Sant Kabir Nagar in the presence of minister in charge of the district, Ashutosh Tandon.

Speaking at a programme here, Adityanath said, “BJP is a disciplined party. Indiscipline will not be tolerated. In this particular case, strict action will be taken against the guilty.”

Sant Kabir Nagar MP Sharad Tripathi and Mehdawal MLA Rakesh Baghel got into an argument at the meeting over taking credit for a newly laid road.

After a brief exchange of words, the MP got up from his seat and began thrashing the MLA with his shoe, as television cameras recorded the episode. The MLA reacted, landing a few blows on Tripathi. The incident had left the party red-faced.

Meanwhile, the UP CM exuded confidence that the BJP will win over 74 seats in the northern state, including Amethi and Azamgarh. “I believe that people will give us more seats,” he said.

“In the last 23 months, we have efficiently improved law and order situation in the state. The successful organisation of Kumbh and Pravasi Bharatiya Divas speaks volume about the change in the state administration,” he said.