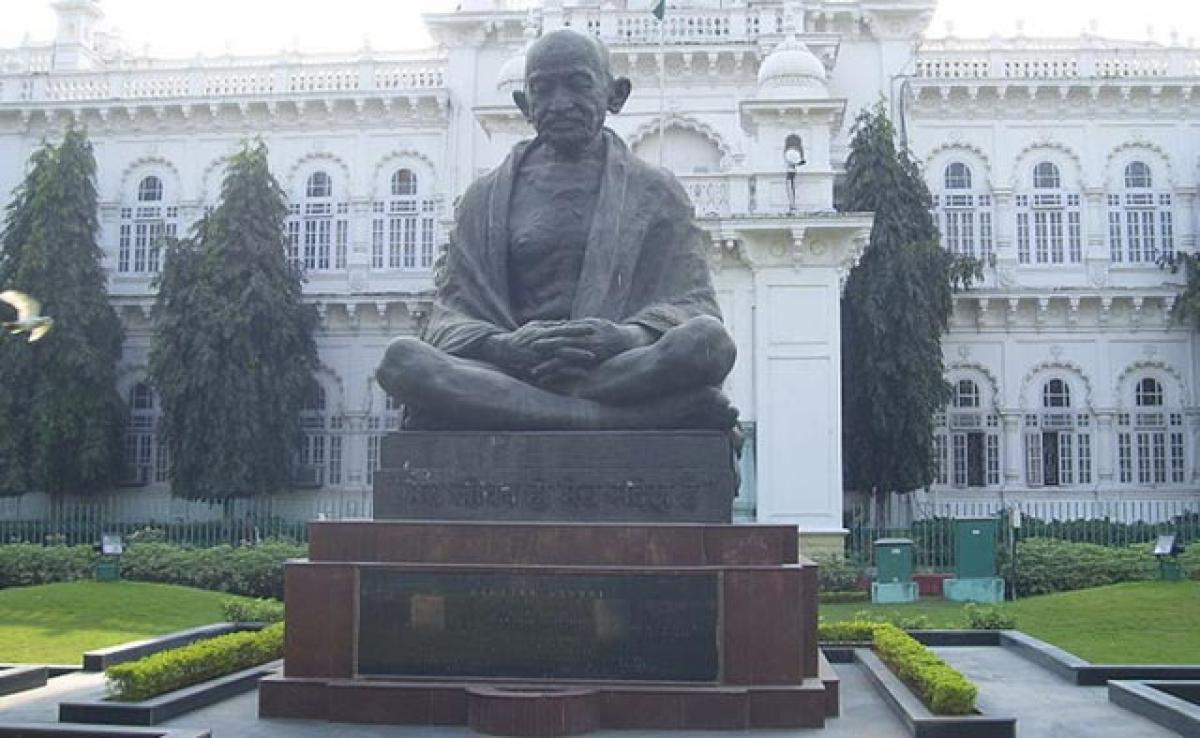 Things never remain stagnant. They change with the times. Life gets shaken up like a kaleidoscope and then settles down into a newer, and perhaps...

Things never remain stagnant. They change with the times. Life gets shaken up like a kaleidoscope and then settles down into a newer, and perhaps more, colourful mosaic before coming back to normal, a new normal. Nonetheless, the whiff of fresh air brings about nostalgia of the days gone by.

That is what is happening in Andhra Pradesh right now. Life was shaken up when the State was bifurcated. Over a period of two years, things are limping back to normalcy, at least there appears to be a semblance of it. From being shelter-less till the other day, colloquially speaking, the residuary State has now reached a stage where it has no further need of the iconic architectural marvel housing the State Assembly building in the common capital.

It is not surprising that the changes have left Andhra Pradesh Chief Minister N Chandrababu Naidu getting nostalgic on Saturday as his 38 years association with the Legislative Assembly building was coming to an end. Touched by the moment that remains frozen for posterity and driven by sentiments and emotions, he went around the premises as from now onwards the normal pattern would change. He will now have to settle down to the new normal, which awaits him at Amravati.

Naidu had entered the premises at a young age of 28 when he first won the elections as a Congress candidate. His ambition of becoming a minister was thwarted when the then Chief Minister M Channa Reddy refused to take him into the Council of Ministers as ‘he was too young’. Naidu did not wait for long as T Anjaiah soon after becoming the Chief Minister, absorbed him as Minister for Cinematography and Technical Education. It was from here that Naidu’s political graph started going up.

He married Bhuvaneswari, daughter of filmy demigod NT Rama in Chennai. The entire Naravaripalle village in Chittoor district descended for the marriage of their son. Later when NTR jumped onto the political bandwagon, and formed Telugu Desam party (TDP) the winds of change became distinct. Around that time, 1982 to be precise, Naidu was on a visit to New Delhi to meet Indira Gandhi. He was staying at AP Bhavan.

As a young reporter working for a leading Telugu daily, I asked him ‘will you Join TDP?’
The young Minister attired in the patented Congress dress code of a white trouser and white shirt, and chappals shot back. “No! In fact, If the party so wishes, I will contest against my father-in-law.” Ironically, this willingness to be pitted against NTR did not find a mention in Naidu’s nostalgic farewell speech in the Legislative Council.

That apart, it is time to recall the golden days of AP Assembly. The majestic white building is a mute witness to the political upheavals that have taken place in the last three decades, since the formation of TDP, that is. Old timers, including my father, often told me about the great qualities of Speakers like Ayyadevara Kaleswara Rao. As I progressed in Journalism, my life also changed from the normal pattern of ‘happy days’ in the national capital to the time when I relocated to Hyderabad in 1990.

Having been a political reporter all along, I have gained firsthand knowledge about the changes in the Assembly and also the conduct of the proceedings. APLA has seen some of the best Legislators and Speakers and those with guts. For instance, a pre-eminent Speaker like G Narayana Rao had the courage to tell NTR, “Mukhya Mantri Garu meeru Kurchondi” (Mr Chief Minister please sit down) and NTR (the Leader of the House) gracefully obliged, which is unthinkable in today’s turbulent times.

There were not many restrictions in the Assembly premises and the media could drive their vehicles (mostly two wheelers.) right up to the place where the Telangana media point is there now. Even the number of security personnel used to be bare minimum. The Assembly used to have its own team of marshals. MLAs using own cars was a rare sight. Almost all of them, despite the party affiliations, travelled by the special buses run by RTC. Only a few MLAs like Ashok Gajapati Raju used to drive their own cars.

Ashok had an old Mercedes Benz car which he retained till almost 2002 or so. Muddu Krishnama Naidu created flutter when he came for sessions in auto-rickshaw. The Assembly is also witness to the Deeksha by NTR and later many more when members squatted before the imposing statue of Mahatma Gandhi after staging walkouts. There were also occasions when NTR as leader of opposition sat on dharna on the footpath outside the state Assembly. At that time, there were no barricades on the road leading to the building.

The opposition then used to be more vocal than what it is now. And more articulate by present day standards. Of course, they have also been suspended from the House. But never did they cross their limits. Never did the MLAs storm into the podium, gherao the Speaker and never did they hurl paper missiles at the Chair.

Alas, the heart aches over what one saw in the AP Assembly during the three-day monsoon session, which ended on Saturday. Unruly behavior is putting it rather mildly. It was goondaism and anarchy that stemmed from the ‘care-a-damn’ attitude. The animal instinct was clearly visible. Let’s hope that the Assembly proceedings in Amravati will bring alive the colourful mosaic and ring in the good old days.