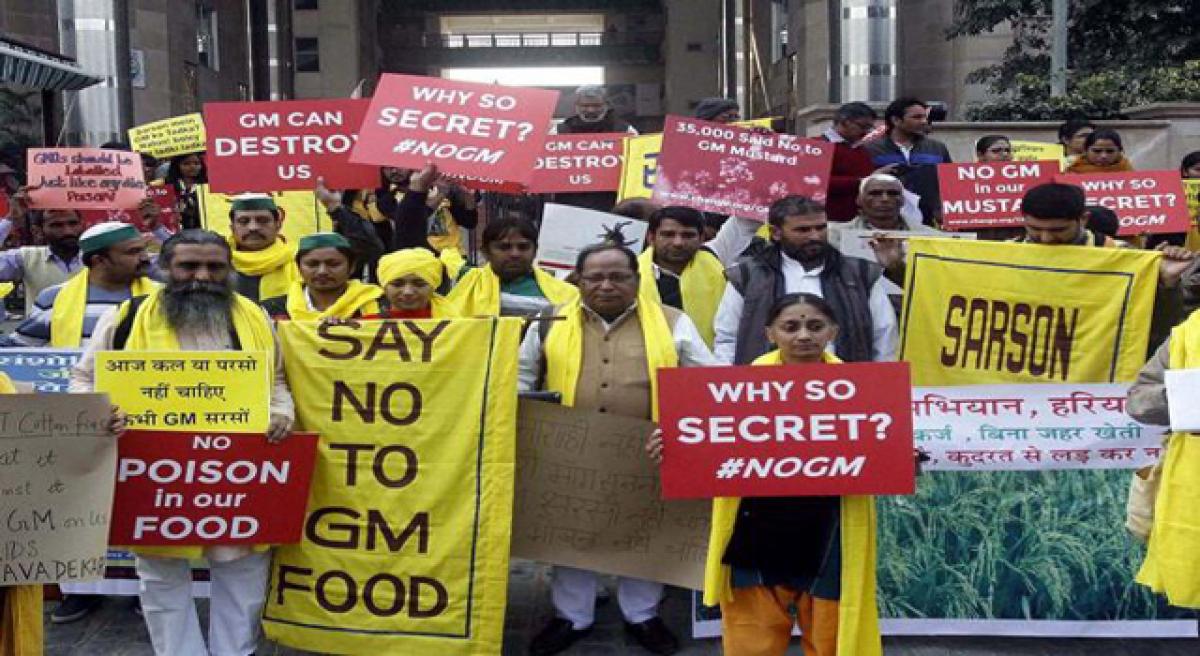 Information regarding genetically modified (GM) mustard shall be shared with consumers. Kavita Kuruganti sought for the agenda and minutes of Genetic...

Information regarding genetically modified (GM) mustard shall be shared with consumers. Kavita Kuruganti sought for the agenda and minutes of Genetic Engineering Appraisal Committee (GEAC). CIC directed it to disclose. She approached the CIC against non-implementation of direction of disclosure, saying that the directions of CIC were not complied with, more than 50 days later. The regulators are just dilly-dallying.

Their website shows that they do not do this. Despite assurances in the CIC hearing and CIC Orders, their website clearly shows that the latest meeting agenda of June 20 was not put up nor were full minutes of other meetings. In the case of bio-safety data being sought, the resolution of the issue with the crop developer should have been over by now and all data should have been shared in the public domain.

The matter is of great urgency since more and more evidence is emerging of the regulators’ failures and by not sharing all data, they are concealing their failures from citizens. Kavitha contended that the Bt Brinjal dossier came out on the regulators’ website only after the Supreme Court order.

In the case of GM Mustard, regulatory opaqueness is apparent from the fact that even minutes of the meeting in which the decision to approve BRL II trials took place are not being shared pro-actively. There are both Supreme Court and CIC 2009 Orders which have already adjudicated on this matter.

The CIC in 2009 concluded conclusively that this is a matter of overriding public interest, and also settled the issue of third party confidential information at that time itself. It asked for all existing data to be shared before any massive trial.

Scientists from the Ministry of Environment contended that they would give entire information after clinical trials proved correct to avoid disclosure of piecemeal information; that part disclosure would not give holistic view of experiment; that the patent right is in favour of inventor; that they gave ‘gist of minutes’ of the meeting of Genetic Engineering Appraisal Committee (GEAC)

The CIC analysed both the contentions and concluded: “The public authority should understand that the information sought by appellant is supposed to be disclosed on their own as per the mandate under Section 4. The decision-making process should be told, along with information about whether such process is adopted, minutes of the meetings, results of clinical trial, and entire information about GM Mustard etc.

This is in public interest. The Cartagena Protocol on Biosafety requires that countries are informed and agree in advance to imports of GE crops. This is called the Advance Informed Agreement (AIA). Before countries are allowed to export any genetically engineered organisms destined for intentional introduction into the environment, they must first obtain the importing country's explicit consent. Article 1 of the Cartagena Protocol on Biosafety explains the objective as follows:

In accordance with the precautionary approach contained in Principle 15 of the Rio Declaration on Environment and Development, the objective of this Protocol is to contribute to ensuring an adequate level of protection in the field of the safe transfer, handling and use of living modified organisms resulting from modern biotechnology that may have adverse effects on the conservation and sustainable use of biological diversity, taking also into account risks to human health, and specifically focusing on transboundary movements.”

The CIC directed disclosure of all bio-safety data pertaining to all other GMOs in pipeline as that is part of voluntary disclosure under Section 4 of RTI Act before 30th April 2016. They sought extension of time to comply with orders, which was given. P Saranya, CPIO, and Madhumita Biswas sought another extension without putting forward any substantive reason. They failed to offer any specific time for furnishing the same.

They are holding and controlling the copy of report, resolution, agenda and minutes. Their plea that they are awaiting final decision is not tenable as that is against the RTI Act and public interest. On 4th August, they were asking for 90 days from 30 the June 2016 (including two months extension), i.e., they have already exhausted half time, but are not willing to give information sought.

Request for extension of time is commitment to give information within 2 months extended period, which they breached. There appears to be no seriousness in seeking extension. They are routinely asking for extension without specifying the period. They were asking two or three, four months. The Commission viewed that such tactics are only to delay but not serious requirement for giving.

By this, they will only harm the public interest and facilitate to promote some interest, not desirable. There is no sufficient reasoning or explanation regarding this request for extension. The Commission found no sufficient reason to extend the time of 90 days to give information which they are supposed to disclose on their own under Section 4(1)(b) of RTI Act.

The information sought is of great public importance, concerning the public health. The Commission directed the public authority, Ministry of Environment, Forest and Climate Change, to proactively publish information related to bio-safety data regarding transgenic mustard hybrid DMH-1 as well as agenda of meeting of Genetic Engineering Appraisal Committee and the minutes of meetings, which they are under statutory obligation to give. The resolution of bio-safety with the crop developer has also been final; it should have been in public domain.

Public authority is attempting to keep vital information out of public discussion. It amounts to prevention of Constitutionally guaranteed freedom of speech and expression of the appellant, who is interested in discussing the pros and cons of GMO-related issues of GM Mustard, which if permitted would cause serious impact on the public health of consumers on large-scale.

Blocking public discussion
Justice Holmes (Abrams v US, 250 US 616 (1919)) characterised the discussion of public matters as essential to see that "the ultimate good desired is better reached by a free trade in ideas.” One of the fathers of the American Constitution, James Madison, (1751-1836) said: "Nothing could be more irrational than to give the people power, and to withhold from them information without which power is abused.

A people who mean to be their own governors must arm themselves with power which knowledge gives. A popular government without popular information or the means of acquiring it is but a prologue to a farce or a tragedy, or perhaps both."

Any attempt by public authority to postpone or delay the disclosure will block the public discussion. As the authority failed to disclose, generating this complaint against non-compliance, the Commission held that the PIO, and deemed PIO Scientist, responsible for not facilitating the disclosure as ordered and undertaken.

They were directed under proviso to Section 20 to show cause why maximum penalty should not be imposed against each of them for non-compliance of Section 4(1(b) even after such information was rightly sought and directed to be provided under Section 3 and 6 of RTI Act as not hit by Section 8(1).

Though Section 4(1)(b) is as such not enforceable, the Commission has every authority to enforce the RTI of appellant, which was violated by these two officers, by not complying with the orders of CIC, and also breached their own undertaking to give the information within two months. The Ministry filed a writ petition in Delhi High Court to stay this order.