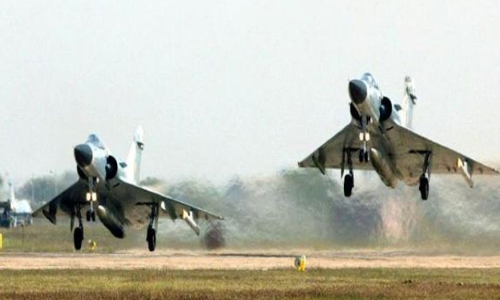 Finally, India hits back at the terror camps in Pakistan When the news of Indian offensive against Pakistani terror camps mind you it is not against Pakistan itself in any sense it came as a huge relief for Indians reeling under terror attacks often on its soil from across the borderThis attack by the IAF may not put a stop to such future attacks But, the very fact that India kept its wo

Finally, India hits back at the terror camps in Pakistan! When the news of Indian offensive against Pakistani terror camps - mind you it is not - against Pakistan itself in any sense - it came as a huge relief for Indians reeling under terror attacks often on its soil from across the border. This attack by the IAF may not put a stop to such future attacks. But, the very fact that India kept its word and hit back at the time of its choice and venue, will be a big deterrent.

If it does not act as a deterrent, then it is up to Pakistan to decide whether it needs to be whipped up on a regular basis following every such dastardly move.The first message was sent through the surgical strikes sometime back, but it did not help Pakistan realise the gravity of the situation or the seriousness with which India was viewing its Western neighbour's terror activity."The non-military pre-emptive air strikes" occurred with least collateral damage and Pakistan has no reason to grudge. After all, it has always been seeking actionable evidence and India delivered the proof of the terror camps.

It is not expected of Pakistan to acknowledge the strikes or accept the casualties. But a non-State actor, Maulana Masood Azhar, head of Jaish- e - Mohammed would certainly not keep quiet. He will break the radio silence and also float a video warning India of the consequences which itself would prove that the terror camps have been eliminated.After all, Masood Azhar has lost his brother-in-law, Yusuf Azhar, along with half a dozen and more terror commanders and a score of trainers on whom he was heavenly dependent for terrorising his neighbours, in the latest air strike.

India's fight is two-fold. On the one hand it has to take on the terrorists being bred by Pakistan on its own soil in Jammu and Kashmir and also those in the neighbouring country. The first one may be time consuming. But the second one is not. You have the will, you can always take out such unwanted life from the face of earth. The three camps hit now are no doubt important with Balakot being the epicentre of Azhar's activity.

He has addressed several meetings and had taken out several rallies. The two-batch 12 aircraft IAF strike of 21 minutes is India's answer. And Pakistan must be thankful to India for helping it in its fight against terror. Balakot, Muzaffarbad and Chikote.Another significant factor here is that Balakot is not in PoK but it is in Pakistan proper. But is this the end of it. No. India will be forced to hit out now at more camps. And there are many in fact. There are at least a 100 such terror camps in Pakistan recruiting and training jihadis against India alone.

Some of these are used against Afghanistan too. While India has been supplying Pakistan details of these camps, on and off, there had been no action. The Ministry of Foreign Affairs (MoFa), Afghanistan, has delivered a list of at least 32 terrorist training camps in Pakistan to that country’s government an asked that “solid action” be taken against them.The list was delivered by Afghanistan’s ambassador in Pakistan two years ago itself as tensions between the two nations mounted in the aftermath of a deadly blast in a Sufi shrine In Pakistan’s Sindh province. The blast left 75 people dead and hundreds wounded then.

The list contained 32 training camps which are used as springboards against Afghanistan from within Pakistani territory. The letter also added a list of at least 85 Taliban operatives and their leaders in Pakistan. It included other terrorist groups such as the Haqqani terrorist network which have conducted major crimes against the people of Afghanistan to Pakistan.The Indian Army is aware of these terrorist training camps operating in Pakistan. There are apparently three kinds of camps: those for recruitment, training and launching attacks. The recruitment camps number about 35-40 and mostly located between Muzaffarabad and Lahore.

Training here lasts 30-35 days. Camps like those in Balakot in Khyber Pakthunkhwa not only recruit but also train terrorists. From here, the brainwashed young men are sent to other camps to learn about arms, navigation and radio telephony. The launching camps have 10-30 terrorists including handlers and instructors. People of PoK, particularly in Muzaffarabad have always been objecting to these camps located near their habitations.

These camps right from the ones in Dhudhnial, Abdul Bin Masul, Batrase up in the North of PoK to Chelabandi, Manastaya, Deolian, Garhi Dupatta/Match Factory, Safaida, Halanshumali, Bagh Aliabad, FWD Kaluita, Rawalkot, Dungi, Tattapani, Hajira, Sensa, Kotli, Palani, Pagosh, Glpur, kund, Samani, Kot Kotera, Khuiretta etc. are the launch pads.While, those in Jalalabad, Balakote, Ghari Habibullah, Uman Bin Khilaba, Nowshera, Zafer Iqbal Batwa etc and at least 25 more are the recruitment and training camps identified by India and the list of which is given to the Pakistanis repeatedly.

Well, this is the first time in the last three decades that the Indian Government has decided to hit back despite suffering so long. There cannot be any politics about this. Whoever heads the Centre in future, must also follow suit. We have been talking and talking about retaliation all these years. We have done so in a big way for the first time. Let it not be the last time. Anytime. This is the paradigm shift India badly needed all these years.