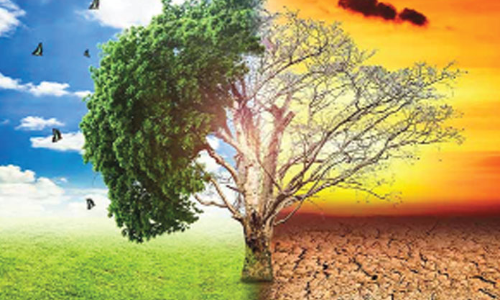 Global warming, the cause of climate change, is driven to a great extent by human activities that involve emission of greenhouse gases, primarily...

Global warming, the cause of climate change, is driven to a great extent by human activities that involve emission of greenhouse gases, primarily carbon dioxide (CO2). The world has seen rising emissions of CO2 over the years, resulting in warming of the planet. Last year, atmospheric CO2 crossed the 410 ppm mark, almost touching 411 ppm. In comparison, at the beginning of the Industrial Revolution around 1850, this was about 280 ppm. Scientists say we should not have allowed CO2 levels to go beyond 350 ppm.

From the point of view of health of the planet, the rising carbon emissions are a serious cause of concern. And yet, instead of seeing any reductions in greenhouse carbon emissions, the globe is witnessing their continuing upward march.Recently, the 2018 United Nations Climate Change Conference “COP24” (the 24th Conference of Parties to the United Nations Framework Convention on Climate Change) met at Katowice in Poland.

High-level delegates from nearly all the nations on the planet met at this annual summit to take forward the climate protection agenda that was given its present shape at COP21, the Paris climate conference, back in December 2015.The importance of the COP24 summit must be seen in the context of the urgency of action that is needed on a global scale to prevent the onset of a catastrophic phase of climate change in the coming decades.

The Paris Accord placed a goal to limit global warming to a level below a maximum of 2 degrees Celsius compared to the pre-industrial levels by the year 2100. A relatively less damaging scenario has also been suggested, whereby a concerted worldwide effort can limit global warming to a more manageable level of 1.5 degrees Celsius. However, the pertinent question is whether enough is being done to achieve this target in time.

The globe has already warmed by almost one degree Celsius compared to the pre-industrial era. What’s even more alarming is that the world is already rushing quickly towards 1.5-degree warming, says Intergovernmental Panel on Climate Change (IPCC) in a special report that it published on October 8, 2018. According to this report, humans have no more than 12 years to restrict global warming to below 1.5 degrees for avoiding the onset of a phase of dangerous climate change.

In comparison, a global warming amounting to 2 degrees would be far more detrimental to the planet than a 1.5-degree warming, both in economic as well as environmental terms. A warmer world would be a death sentence for several species, disrupting marine as well as terrestrial ecosystems.

Humans would be affected deeply by events such as hurricanes, droughts and forest fires, which would be more frequent and intense. Rising sea levels could mean global displacement of hundreds of millions of people. Melting of glacier, which has picked up speed in recent decades, will be even faster, affecting river systems and availability of water for millions of people. All this is succinctly summarised by an authority on this subject, as follows. “Limiting global warming to 1.5°C compared with 2°C would reduce challenging impacts on ecosystems, human health and well-being, making it easier to achieve the United Nations Sustainable Development Goals,” says Priyardarshi Shukla, Co-Chair of IPCC Working Group III.

It was only a few years ago that 1.5-degree scenario looked attainable. Now the prospects of achieving it are gloomy. If adoption of clean energy is not achieved at a faster rate, this goal is going to slip away from our hands. What’s more, the world is also running out of time for the next target – the 2-degree scenario. In fact, keeping in view the current global energy mix and the foreseeable action plans of the world community, humanity may already be moving beyond two degree warmer world – far beyond what is considered sustainable.

To put this in perspective, consider this: even a world warmer by 1.5-degrees would put enormous pressure on ecosystems and world economics, throwing unprecedented challenges at human societies across the continents. Whereas, a temperature rise beyond 2 degrees would make the situation even more perilous. Many countries still continue to increase their power generation, largely fuelled by coal. Meanwhile, the consumption of fossil fuels for transportation is also rising fast.

This electricity consumption trend is likely to continue upwards for the foreseeable future for a country like India, based on growing urbanisation and rising living standards, which would translate into greater electricity use. India’s electricity consumption is presently far less than world average. Thus, with rising GDP levels, India is bound to witness a much faster uptake of electricity in the coming years. As a result, the Indian economy would certainly use far more electricity per capita than the present times.

These evolving aspects, coupled with India’s growing aspirations for export-led growth, would require relatively more electricity generation. With rising living standards, the growth in demand for electricity in India is at over 12%, which is faster than its GDP growth rate of about 7%, says IEA in its Global Energy and CO2 Status Report released in March 2018.Nations all across the globe are mobilising plans to curb carbon emissions by reducing the use of fossil energy sources and increasing the role of clean energy sources.

Similarly, India has chalked out an ambitious plan to increase the role of clean power generation. Nuclear power, with its clean, green and safe attributes, thus has a decisive role to play in this regard, along with renewable energy options such as wind and solar. Nuclear power plants emit no greenhouse gases during operation, and thus produce planet-friendly electricity, in harmony with nature. Presently, India has 22 nuclear power reactors, with a total installed power generation capacity of 6,780 MW.

Recently, Government of India accorded approval in one go for setting up 12 indigenous PHWR-type nuclear power reactors in the country. And with these reactors, India is poised to add a total of 20 new reactors in an unprecedented push to achieve a capacity addition of 15,200 megawatts. This positive move will increase the share of clean power generation significantly, thereby not only facilitating India to realise its climate goals, but also help the earth by contributing towards slowing down global warming.