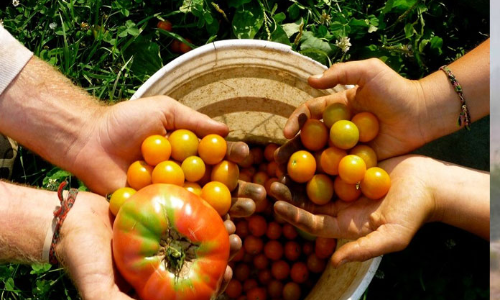 A threeday Natural and Organic Products Mela was held from March 1 at Night Bazar at Shilparamam at Madhapur in Hyderabad The mela was organised by...

A three-day Natural and Organic Products Mela was held from March 1 at Night Bazar at Shilparamam at Madhapur in Hyderabad. The mela was organised by Organic Farmers Bodies for farmers and general public by Gau Adaritha Prakrithi Vyavasayadarula Sangham in association with Ekalavya Foundation, Grama Bharathi, Rythu Nestham Foundation and Bharatiya Kisan Sangham.

The mela that concluded on Sunday highlighted the importance of natural and organic products in the changing times of agrarian crisis and growing health concerns. The Central and State governments are working with a single motive to make agriculture profitable to farmers. Nowadays, farmers are using fertilizers and pesticides in their attempt to save their standing crops and to get a profitable yield.

However, residues of fertilizers and pesticides are found in our food products, land and water extensively which is injurious to our health. It is against this backdrop one has to take organic farming as a vital agricultural practice to cultivate healthy grains and vegetables and to ensure a decent earning for the farmer. It depends mainly on cattle dung, cattle urine, basin flour and jaggery to produce solid nutrients liquid nutrients (by fermentation) which acts as fertilizers and pesticides.

Organic farming envisages cultivation, as intercrop or border crops, of sorghum and minor millets (ragulu, sajjalu, sunflower). Presumably insects are more attracted towards these crops, thus major crops are saved. As of now, organic farming at zero budget is confined to rich farmers as pleasant pastime, and the products are sold in big super stores for elite public. There is no guarantee that the product is entirely organic. i

f neighbours spray pesticides on their crops, it will drift into the organic farmed crop nearby. Sometimes farmers spray pesticides deliberately also to save organic crop. However, analytical testing methods (atomic absorption spectrometer to best for toxic metals, HPLC /MS for pesticides) are expensive.

Scenario before 1950’s: Before 1950’s, there were no pesticides or fertilisers. DDT, Endosulfan, urea and DAP were introduced widely around 1960’s. High yielding verities of wheat (grateful to Borlaug) and rice of short duration, do not grow high as dwarf versions were introduced. Increased irrigation converted barren lands into agricultural fields. Thus, the ‘green revolution’ was ushered in 1960’s.

Scientist’s advocated integrated pest management (IPM), need-based use of pesticides, and ploughing of the land before summer so that eggs of pests got killed and nesting place for birds have been provided (to eat bigger insects). However, these were not followed by farmers seriously. In any case, the ‘green revolution’ wiped out our famine, in spite of the population trebling during the following years.

Remember 1943 Bengal famine, 1950’s Rayalaseema famine and shortage of food all over the country in 1962-1964. Remember “miss a meal” call by Lal Bahadur Shastri. We were at that time dependent on continuous wheat supplies by the USA under PL 480 grants. In fact, the weed, parthenium hysterophorus, popularly known as congress grass which is now found all over is an unwelcome gift of American wheat.

Another way of organic farming: Increasing use of nitrogenous fertilisers and continuous agriculture (three crops per a year) made soil sterile and without fertilizer, crops never grow. Pests’ eggs are in soil, which sprout as insects along with seeds as we sow in the very beginning of first monsoon. It is now “no crop grows without pesticides”.

In 1990’s, neem as a safe environmentally pesticide was promoted not only in India but also in the USA. Azadirachtin, Azadirachtin, a chemical compound belonging to the limonoid group, which is a secondary metabolite present in neem seeds, is an active source, not a pesticide but alter the growth of insects. It is called antifeedant.

If one spray neems oil with emulsifier (5% in water) or Karanji oil with emulsifier (5% water) on calendar basis (first in 15 days after the crop is transplanted, and then after next 30 days and then 45 days and then last after 60 days) the insects never eat the crop. In view of the bitter nature of the concoction, the insects prefer to die rather than eat the crop. It exerts gustatory repellence, also called as insect antifeedant.

We researchers, at Department of Chemistry, Osmania University, Hyderabad, formulated neem kernel oil NAVNEM EC (high azadirachitn content (1000 ppm to 1200 ppm), and / or karnaji oil, distributed among several hundred of farmers in Telangana area with good results. To supply nutrients as fertiliser it is advocated to grow janum, Pillipesara in Telugu, leguminace family, which fix nitrogen, between one crop and the next crop.

After three months, the land ploughed should be sowed all with this young green crop. Even during ploughing also neem leaf or kanuga leaf (Pongamia glabra), vavili leaf (Vitex negudo) along with branches if added to the soil and ploughed together also provide nutrients to the soil as alternative fertilizer.

Current scenario: Today farmers are suffering due to high cost of agriculture low returns (minimum support price of the government not efficiently working). In India, “Rain follows Sun” either we have cyclones, floods or drought. Agriculture is dependent on nature. And the nature is mishandled by us. Practically, there is no cattle population, no labour, even if available they are available at a higher cost. Tractors are used to plough the lands.

Without “cattle dung and urine” this organic method never works. No jaggery and basin flour are available at affordable price. In fact, both are agricultural produce. Today, neem or karaji trees are not enough to cater the needs of all farmers. In fact, the disturbing fact is that there is no greenery in villages.

Therefore, If we need to prepare ourselves for organic farming, more cows, more jaggery, more basin flour, neem trees, karanji (kanuga) trees and vavili(Vitex negundo) trees should be available. Unless these materials are available, it is not an advisable exercise to propagate organic farming on a largescale. We do need organic farming to protect our health, but we should not compromise with yield. Awareness is necessary and this way such symposia are welcome.