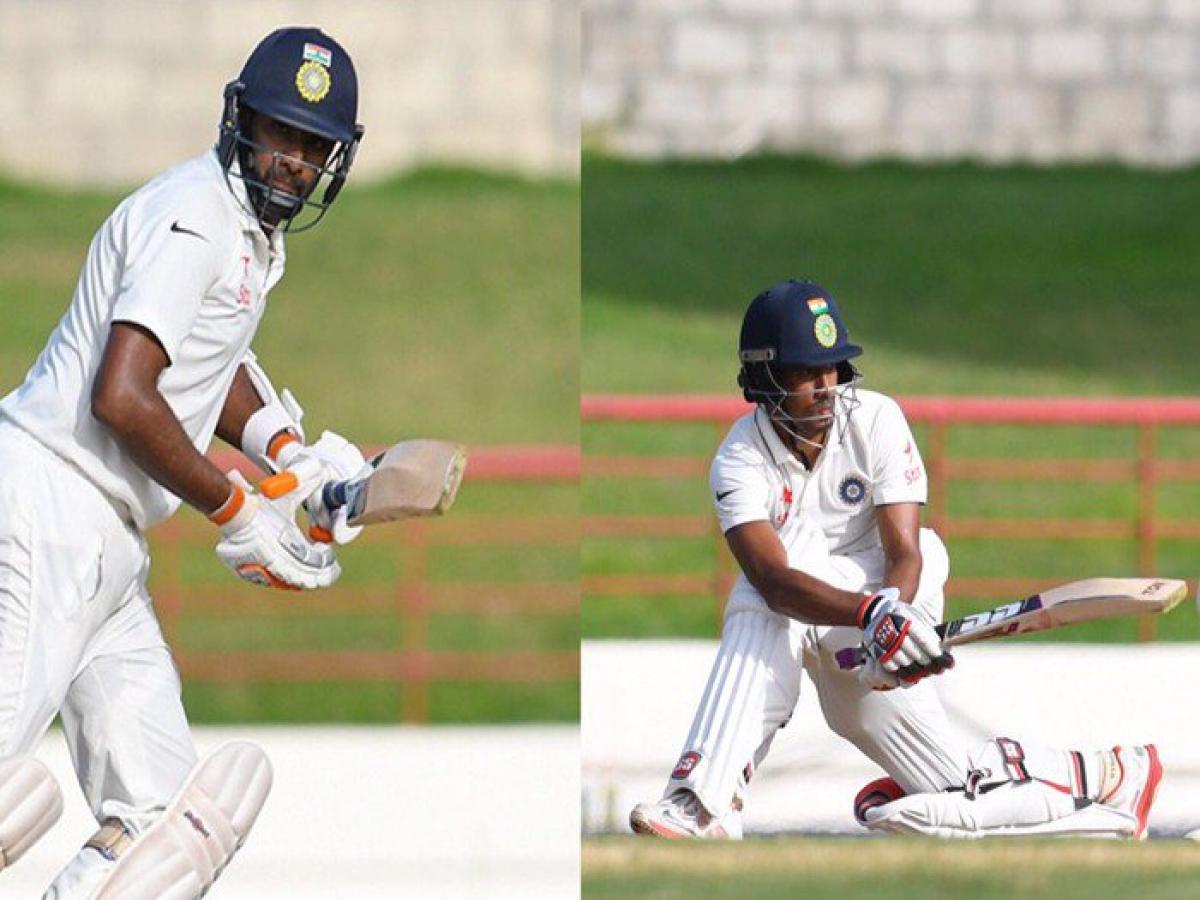 With an unbeaten 108-run sixth wicket partnership, Ravichandran Ashwin and wicket-keeper Wriddhaman Saha brought India back into the game to post 234 for 5 wickets against a domineering West Indies on the first day of the third Test at the Darren Sammy National Cricket Stadium here on Tuesday.

​St. Lucia: With an unbeaten 108-run sixth wicket partnership, Ravichandran Ashwin and wicket-keeper Wriddhaman Saha brought India back into the game to post 234 for 5 wickets against a domineering West Indies on the first day of the third Test at the Darren Sammy National Cricket Stadium here on Tuesday.

Making best out of the second new ball to notch up 46 in nine overs, the unbeaten duo rescued India from collapsing in the first innings and accelerated the run-rate to score 104 in 38 overs during the last session after Windies pacers tamed their top order to 126 for 5 in the first 52 overs.

All efforts by the Caribbean captain Janson Holder to break the partnership did not succeed despite using six bowlers, including spinner Roston Chase, who bagged two wickets along with Test debutant Alzarri Joseph.

Chase was, however, not brought again into the attack as the pitch was not conducive to his off-spin bowling.

Earlier, India was struggling till tea session with only 130 for 5 wickets on board.

Resuming at 87 for 3 wickets after lunch, Rahane and Rohit Sharma tried to consolidate the first innings by playing cautiously against a combined attack of pace and spin with restricted field placement.

Sharma, who came in place Cheteshwar Pujara, was the first to exit in the third consecutive maiden over and 26th over of the innings during the post-lunch session, as he nicked an off-stump ball by Joseph to give wicket keeper Shane Dowrich a regular catch, his second after getting off-opener Shikhar Dawan for one in the third over.

Though Rahane tried to build the innings with Ashwin, he was bowled by all-rounder Roston Chase with a brilliant full toss that swung into the wicket in the 50th over after he scored a paltry 35 in 133 balls with four fours.

Saha joined Ashwin to limit the damage and take the team out of the crisis that brew in the pre-lunch session when three wickets, including that of Lokesh Rahul (50), Dhawan (1) and skipper Virat Kohli (3) fell by the 20th over.

After the top order left in the first two sessions of the day scoring 126 in 50 overs, Ashwin and Saha defied the combo attack by defending the wicket to build the innings from where Rahane left.

The run rate, however, slumped in the post-lunch session, as the middle order could score only 47 in 29 overs as against 87 in 23 overs during the pre-lunch session.

Earlier in the day, Rahul and Rahane steered the team out of trouble by posting 58-run third wicket partnership in after losing Dhawan and Kohli for a paltry 19 in the first six overs of the game.

Spinner Chase and pacer Joseph picked up their second wickets during the post-lunch with disclipined bowling and maintaining both line and length.

Sharon Gabriel is the other successful bowler who scalped Dhawan in the third over.

The 24-year-old Rahul continued with his brilliant form from the second Test at Kingston in Jamaica where he scored 158 in 303 balls, with 15 boundaries and three sixes.

The Bengaluru lad, however, got caught in the short fine leg by Kraigg Brathwaite in the 20th over to a raising ball of Chase just after scoring his seventh half-century in Tests in 65 balls, with six boundaries.

For the hosts, Joseph bagged his first Test wicket when Darren Bravo caught the Indian captain at first slip in his second over and sixth of the innings.