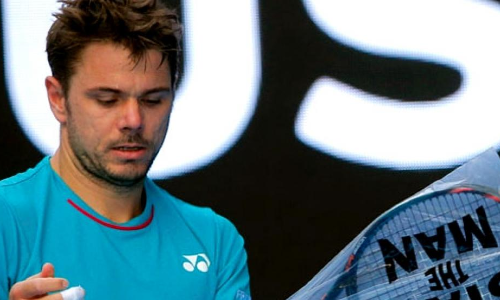 Fourth seed Stan Wawrinka overcame a rusty start to advance to the fourth round of the Australian Open with a 3-6 6-2 6-2 7-6(7) victory over Serbia\'s Viktor Troicki on Friday.

Melbourne: Fourth seed Stan Wawrinka overcame a rusty start to advance to the fourth round of the Australian Open with a 3-6 6-2 6-2 7-6(7) victory over Serbia's Viktor Troicki on Friday.

Wawrinka will now meet Andreas Seppi in the fourth round after the Italian beat Belgium's Steve Darcis 4-6 6-4 7-6(1) 7-6(2) in their third round match on Show Court 3.

The 2014 Australian Open champion was broken three times by the 29th-seeded Serb in the first set in their clash on Rod Laver Arena and committed twice as many (14) unforced errors as the 30-year-old from Belgrade.

Wawrinka, however, finally settled and while Troicki broke when the Swiss was serving for the match at 5-4 and 6-5 in the fourth set then saved a match point in the tiebreak, the US Open champion finally clinched victory in two hours, 32 minutes.