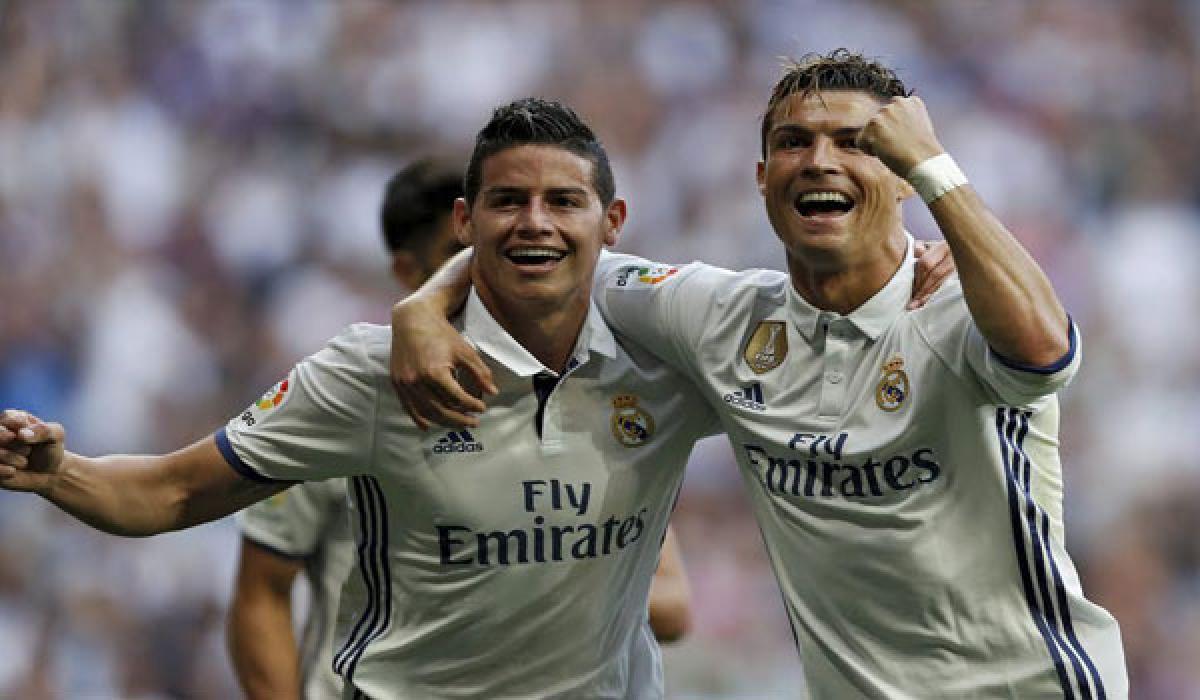 Cristiano Ronaldo scored his 400th goal for Real Madrid as Zinedine Zidane\'s side closed in on a first La Liga title since 2012, easing to a 4-1 win over Sevilla on Sunday while Neymar hit a hat-trick for Barcelona, who thrashed Las Palmas 4-1.

Madrid: Cristiano Ronaldo scored his 400th goal for Real Madrid as Zinedine Zidane's side closed in on a first La Liga title since 2012, easing to a 4-1 win over Sevilla on Sunday while Neymar hit a hat-trick for Barcelona, who thrashed Las Palmas 4-1.The two sides are equal on 87 points with Barcelona leading the standings on their head-to-head record although Real have a game in hand against Celta Vigo next week and need only four points from their final two matches to take the title.

Defender Nacho Fernandez put Real ahead in the 10th minute with some quick thinking from a free kick, sidefooting the ball into the bottom corner and flummoxing Sevilla who were still preparing their defensive wall.Nacho was a surprise inclusion in the starting line-up as Zidane rested Marcelo, Casemiro, Karim Benzema and Luka Modric for Wednesday's rescheduled game at Celta, the latest demonstration of his confidence in a talent-packed squad which was a key factor in his side's march towards the title.

Ronaldo netted his milestone goal in the 23rd minute from close range and then added number 401, restoring Real's two-goal advantage in the 78th with a curling shot into the top corner after Stevan Jovetic had pulled one back for Sevilla early in the second half.

Pedro Bigas pegged back the champions by sliding in to meet a cross from Kevin-Prince Boateng in the 63rd but Neymar quickly put Barca's minds at ease with two quick-fire finishes from close range in the 67th and 71st.Atletico Madrid sealed the third automatic Champions League spot despite only drawing 1-1 at Real Betis and Sevilla were guaranteed fourth spot and a play-off berth in Europe's elite competition after Villarreal were held at home to Deportivo La Coruna, who clinched survival.

Sporting Gijon were relegated despite winning 1-0 at Eibar as tiny Leganes secured a 1-1 draw at Athletic Bilbao. It ensured their remaining in La Liga for another year after being promoted to top flight for the first time last season.