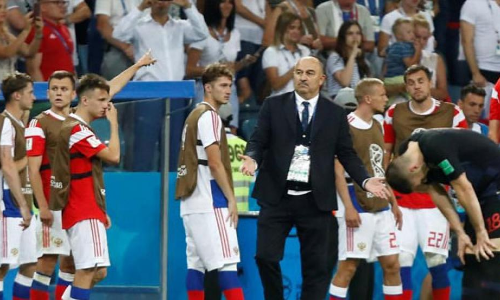 Having knocked out Spain on penalties in the previous round, Russia, 70th in the FIFA rankings, again defied the odds to take 20th ranked Croatia to a shootout with a 2-2 draw after extra time but on this occasion their marksmanship deserted them at the in FIFA World Cup 2018

Russia’s World Cup dream ended within agonising sight of the semi-finals as they went down 4-3 on penalties to Croatia on Saturday after another gallant performance in front of their fanatical fans which again belied their lowly ranking.

Having knocked out Spain on penalties in the previous round, Russia, 70th in the FIFA rankings, again defied the odds to take 20th ranked Croatia to a shootout with a 2-2 draw after extra time but on this occasion their marksmanship deserted them.

Croatia, a shadow of the team which cruised through their group with maximum points, won the shootout when Ivan Rakitic calmly netted and they will face England in the semi-finals in Moscow on Wednesday.

As usual, Russia went down fighting in front of a raucous crowd as Mario Fernandes headed a dramatic equaliser with five minutes of extra time left, only for the Brazilian-born player to turn villain as he missed their third shootout kick.

Before that, Denis Cheryshev had rifled Russia in front with a long-range thunderbolt in the 31st minute before Andrej Kramaric equalised for Croatia six minutes before halftime.

Crotia then went in front with a soft header from substitute Domagoj Vida in the 101st minute, the first goal scored in extra time at the tournament.

Russia coach Stanislav Cherchesov, whose side were without a win in seven matches before the finals, prompting many to fear an embarrassing group stage exit, was typically belligerent.

“I’ve very pleased at how the team played the whole World Cup, how it showed its character and worked to the maximum,” he said. “But you always start questions with negative things.

“This World Cup has been organised in the best possible way. What has happened, happened. We have been a very good host from the point of view of football and sports, organisation and administration.”

Croatia, who reached their first semi-final since 1998, dominated possession over the 120 minutes but were let down by poor final passes and were vulnerable to Russia’s aerial game.

“We should have finished the job before penalties, but maybe it’s written in the stars that we have to go through the extra drama,” said inspirational playmaker Luka Modric.

After a lively opening, the intensity of the game dropped off, with sessions of head tennis in midfield, but it was Russia’s more rustic approach which paid dividends first as they went ahead out of the blue, in stunning style.

Cheryshev collected the ball near the halfway line, exchanged passes with Artem Dzyuba and curled a superb 25-metre shot past the transfixed Subasic.

Slack defending allowed Croatia to level eight minutes later. Striker Mario Mandzukic ran unchallenged into the penalty area and chipped a low ball back into the centre where the unmarked Kramaric scored with a glancing header.

Croatia were agonisingly close to taking the lead on the hour when Russia’s defence failed to clear the ball and Ivan Perisic’s shot hit the inside of the post and rebounded harmlessly across the face of the goal.

Croatia did finally go ahead when Vida met a corner with a weak downward header which found its way through two sets of legs and rolled into the net.

To their eternal credit, Russia still did not give in and hit back again when Alan Dzagoev floated a free kick into the area and Fernandes powered home a header to force a shootout.

“I don’t cry often, but now I have good cause,” said Croatia coach Zlatko Dalic. “Of course there is some power left for the English - we’ll not stop, we’ll try to play our best game then.

“We have two matches to play, we are very motivated, we will give our all.”