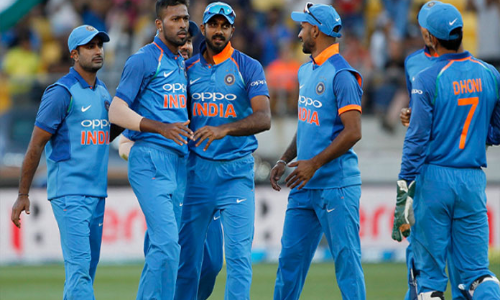 Ambati Rayudu, Vijay Shankar and allrounder Hardik Pandya rose to the occasion to hand India a 35run victory against New Zealand in the fifth and final One Day International match and clinch the limited overs series 41 here on Sunday

Wellington:Ambati Rayudu, Vijay Shankar and all-rounder Hardik Pandya rose to the occasion to hand India a 35-run victory against New Zealand in the fifth and final One Day International match and clinch the limited overs series 4-1 here on Sunday.

After losing four quick wickets for just 18 runs, Rayudu (90), Shankar (45) and Kedar Jadhav (34) stabilised the Indian innings and then Pandya made a quickfire 45 in 22 balls towards the end to post a decent score before the Indian bowlers came into the picture and dismissed New Zealand for 217.

Chasing 253, New Zealand openers Colin Munro (24) and Henry Nicholls (8) started the proceedings on a positive note but pacer Mohammad Shami dismissed Nicholls in the fourth over when the scoreboard was reading 18 runs.

Unperturbed by the fall of Nicholls' wicket, Munro and skipper Kane Williamson (39) played sensibly and punished the bad balls. But while trying to increase the scoring rate, Munro was clean bowled by Shami in the 10th over.

Veteran batsman Ross Taylor (1) was also dismissed cheaply in the next over by Pandya. He was adjudged leg before wicket.

New batsman Tom Latham (37) then joined his skipper in the middle and forged a crucial 67-run partnership and helped New Zealand to cross the 100-run mark. But soon, Williamson was sent packing by Kedar Jadhav in the 26th over when the scoreboard was reading 105.

Latham, who seemed good in the middle, was the next batsman to depart. He was adjudged leg before wicket off leggie Yuzvendra Chahal after three overs. Chahal then picked up Colin de Grandhomme (11) after two overs to make the scoreboard read 135/6.

With the lower-order despatched early, James Neesham (44) had to play till the end to give New Zealand some chance in the match but a sloppy run-out saw Neesham heading back to the pavilion.

Opting to bat, India got off to a poor start as opener Rohit Sharma (2) was the first one to be dismissed with just eight runs on the board. Pacer Matt Henry clean bowled the Mumbai batsman in 4.1 overs.

In the very next over, opener Shikhar Dhawan (6) was sent packing by Boult. Dhawan played 13 balls and hit one boundary.

Shubman Gill (7), who made is debut in the last match, failed to impress this time as Henry dismissed the promising batsman in the seventh over.

With three wickets in back to back overs, it was now on wicketkeeper-batsman Mahendra Singh Dhoni and Rayudu.

Despite the regular fall of wickets, Rayudu was playing sensibly at the other end but lack of support hampered India's scoring rate.

Dhoni (1), who missed the last ODI due to a hamstring injury, faced only six balls and was dismissed by Boult to have the scoreboard read 18/4 in nine overs.

The fall of Dhoni's wicket brought in Shankar, who with Rayudu played sensibly and forged a crucial 98-run stand for the fifth wicket to stabilise the innings.

They played some beautifully crafted shots all around the park but just when things seemed good in the middle, Shankar got run out. He played 64 balls and slammed four boundaries before getting out in the 32nd over.

New batsman Kedar Jadhav (34) then joined Rayudu in the middle and the pair stitched together a 74-run stand helping India to reach close to the 200-run mark.