Grandeur of the Zayed Mosque 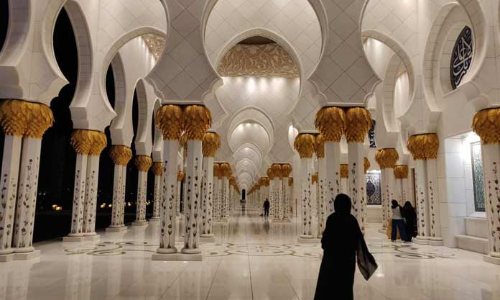 If Abu Dhabi is roughly in the shape of a triangle, the grand mosque, also called the Sheikh Zayed Mosque is right at the tip, greeting and welcoming the visitors to the land of grandeur and history The four minarets of the mosque and the structure in marble rise into the sky pristine in its pure white in the mornings and shining and reflecting the brilliance of moonlit nights

If Abu Dhabi is roughly in the shape of a triangle, the grand mosque, also called the Sheikh Zayed Mosque is right at the tip, greeting and welcoming the visitors to the land of grandeur and history. The four minarets of the mosque and the structure in marble rise into the sky pristine in its pure white in the mornings and shining and reflecting the brilliance of moonlit nights.

It is the brainchild of the Late president Sheikh Zayed bin Sultan Al Nahyan, built to be the largest mosque in the country spread over 12 hectares, with 1096 columns, 82 domes, and can hold upto 51,000 worshippers who make it to the mosque during special Eid prayers.

Designed by a Syrian architect Yousef Abdelky, the resplendent structure has traces of Persian, Indo-Islamic (Moghul) and Egyptian architecture. The domes and the marble floor with beautiful inlay work representing the wide variety of flowers found around the region are inspired by the Moghul style that you see at Taj Mahal, while the minarets are quintessentially Arab. The archways borrow from the Moroccan style. The floor in marble is designed to stay cool even during the hottest of the summer days. The marble for the structure came from all over the world including a small village Makrana from Rajasthan. As one walks into the mosque past the archways and the courtyard soaking in the brilliance of design, architecture, the gilded gold, the beautiful calligraphy, the pools reflecting the illuminated columns in the night leading into the prayer hall – one is dazzled by the brilliance of it all. Along the way one can also see the final resting place of Sheikh Zayed where Quran is recited 24x7, barring two instances.

The prayer hall made in Italian marble on its own is grandeur and opulence personified. Chandeliers using 40 million Swarovski crystals tell a story of their own. Designed to represent the tree of abundance and livelihood, the palm tree including the dates that adorn different colours during different stages of ripening, the main chandeliers weigh 2 tonnes. The columns are embedded with mother of pearl, floor design near the columns made of gold covered with glass mosaic, and a resplendent handmade woollen carpet. The beautiful carpet weighing 35 tonnes, is made by 1200 women over 2 years and brought down in Abu Dhabi in pieces to be woven together on location. The 99 names of Allah are etched on the wall in traditional calligraphy by an eminent Arab calligrapher Mohammed Mandi Al Tamimi.

In UAE, 2018 was observed as ‘Year of Zayed’ the father of the Emirates, who was a visionary and revered as a benevolent leader responsible for many pathbreaking changes that the people continue to reap benefits from. This year is the ‘Year of Tolerance’. Sheikh Zayed Grand Mosque is indeed a representation of tolerance and the vision of Sheikh Zayed, who wanted the great structure to represent unity and the cultural diversity of the Muslim world, and the symbolic representation of tradition and modernity synergising to create a thing of beauty.

Tourists can visit the mosque from 9 am to 10 pm, Saturday to Thursday and on Fridays from 4:30 pm onwards, except for the month of Ramadan when the mosque remains closed for visitors on Friday. The mosque has a dress code and mentions decent clothing – loose fitting clothes and long trousers for men; and the abaya/ hijab (a long black gown with long sleeves) for women that is available for rent. Women are expected to cover their hair when in the mosque.