Congress flays TRS government over accord with Maharashtra 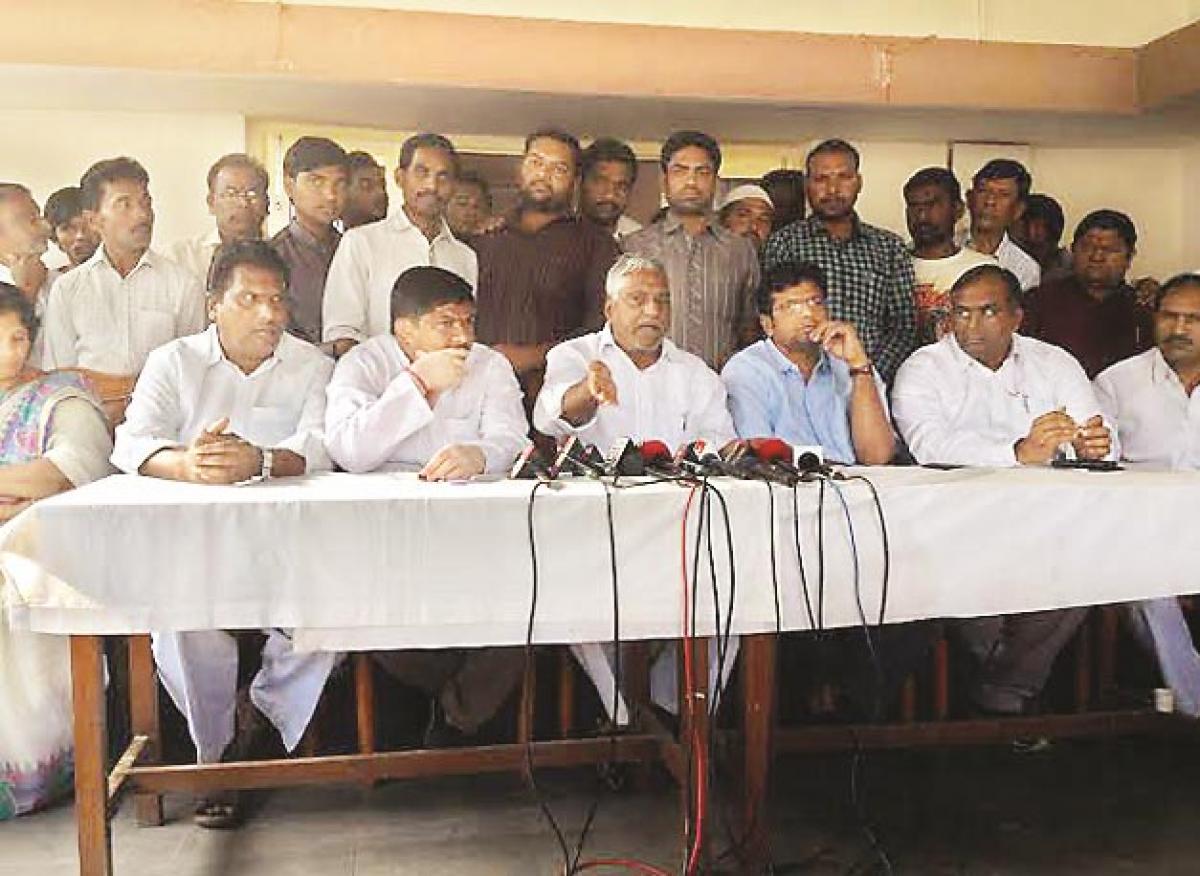 Congress leaders found fault with the State government for entering into an understanding with Maharashtra State to construct Medigadda project across the Godavari River in a hurry just two days before the commencement of the Assembly session without holding consultations with the Opposition leaders and irrigation experts.

Karimnagar: Congress leaders found fault with the State government for entering into an understanding with Maharashtra State to construct Medigadda project across the Godavari River in a hurry just two days before the commencement of the Assembly session without holding consultations with the Opposition leaders and irrigation experts.

Speaking to the media here on Tuesday, the Congress leaders said that there was a conspiracy behind the agreement and requested the intellectuals and irrigation experts to think over on rolling back the agreement. They wanted to know the reason behind entering into a fresh agreement while the previous Congress government had already reached an understanding with the Maharashtra government on May 5, 2012.

Where was the need to take out a huge victory rally when there was nothing new in the agreement, they questioned, and termed it as a publicity stunt. Senior party leader and Jagityal MLA T Jeevan Reddy said that Chief Minister K Chandrashekar Rao had mortgaged the interests of the Telangana people at the feet of Maharashtra Chief Minister Devendra Fadnavis by agreeing to reduce the height of the project to 148 metres from 152 metres. What has KCR achieved with the agreement, he questioned.

Referring the government’s argument that Maharastra was not accepting Pranahita-Chevella project as about 1,800 acres land was submerged in the project, he wondered how Fadnavis has agreed for the Medigadda project wherein about 3,400 acres of fertile agricultural lands were submerged in that state.

Jeevan Reddy said that Rs 40,000 crore was enough to complete the project if it was taken up at Thummidihutti of Adilabad but a change in the design requires an additional amount of Rs 15,000 crore. On the other hand, power shortage would be a big problem to lift the water, he added. According to the old design, water requires to lift up to a height of only 20 feet and drop in Yellampalli project.

However, water has to lift at three places Medigadda, Annaram and Sundilla which requires 1,500 MW power. Moreover, Maharashtra was planning to construct two projects on its land between Thummidihutti and Medigadda, he said and asked as to how Medigadda would get water once the Maharashtra projects were completed.

It was a clear case of a senseless decision taken by the Chief Minister and with a view to show his mark in the governance, KCR has started redesigning the projects, he said. Former Minister, D Sridhar Babu demanded a while paper on the agreement and change of projects in the name of redesign.

While the Scheduled Castes and Scheduled Tribe communities were worried a lot over the submergence of their lands, both BJP and TRS governments were least bothered about the interests of those communities. He made it clear that there was no question of allowing the government to take away water to others areas without fulfilling the local needs. Former MP Ponnam Prabhakar threatened to intensify the agitation if the government fails to protect the interests of farmers and common public.