Folk paintings and traditions of India 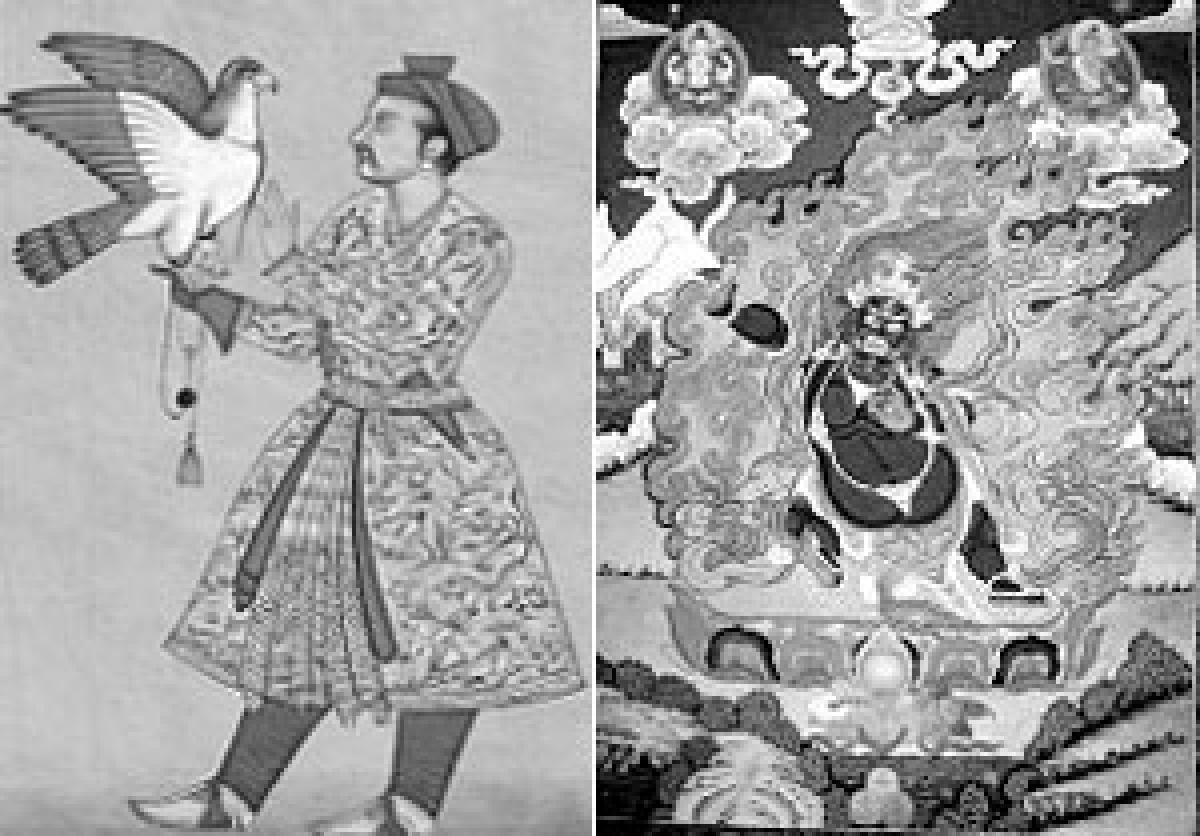 Madhubhani paintings also called Mithila paintings have been done traditionally by the women of villages around the present town of Madhubhani in Bihar. It is also practised in the adjoining parts of Terai in Nepal.

These paintings are especially inspired by the Jaganadh and Vaisnava cult, the themes are from Gita Govinda of Jayadev, the Navagunjara the Ramayana and the Mahabharata. These subjects may also be inspired by Shaiva and Shakti cults.

With the emergence of Bhakti movement the paintings of Radha and Krishna were painted in vibrant shades of orange, red and yellow. Some paintings also depict social scenes. Some of the popular themes represented through this Art form are:
n The Badhia - depiction of the temple of Jagannath
n Krishna lila - Enactment of Jagannath as Lord Krishna displays his powers as child.
n Dasabatara patti - The ten incarnations of Vishnu.
n Panchamuki - depiction of lord Ganesh as a five headed diety.
n More than anything the themes are really the essence of the Art form.

Madhubhani paintings
Madhubhani paintings also called Mithila paintings have been done traditionally by the women of villages around the present town of Madhubhani in Bihar. It is also practised in the adjoining parts of Terai in Nepal. This style of paintings has been traditionally done by women of the region, though today men are also involved to meet the demand. These paintings are popular because of their tribal motifs and use of bright earthy colours for commercial purposes. The work is now being done on paper, cloth, canvas etc. Cotton wrapped around a bamboo stick forms the brush.
* Black colour: obtained by mixing soot with cow dung.
* Yellow colour: from turmeric or pollen or lime and the milk of banyan trees.
* Blue colour: from indigo.
* Red colour: from kusum flower juice or red sandal wood.
* Green colour: from the leaves of wood apple tree.
* White colour: from rice powder.
* Orange colour: from palasha flowers.
The colours are applied flat with no shading and no empty space is left.

Though the origins of Madhubani painting art not clear it is said that they originated during the Ramayana age when Janaka, king of Mithila, made people paint the floors and walls of their houses on the occasion of his daughter Sita’s Marriage with Rama. The folk belief that the gods visit each house in the morning is an inspiration behind the paintings tradition.

Figures from nature and mythology are adopted to suit their style. The themes and designs widely painted are of Hindu deities such as Krishna, Rama, Siva, Durga, Lakshmi, Saraswati, sun and moon, Tulasi plant, court scenes, wedding scenes, social happening , Floral, animal, and bird motifs, geometrical designs are used to fill up all the gaps. Symbolic meanings are attached to most crafted their massage accordingly. Now they create scrolls reflecting social issues, such as literacy and environment., with globalization patuas are responding with stories featuring international issues but with local twist.

With the advent of television and movies the patuas are losing their traditional audiences and are now attracting western tourists. They travel to hotels where they sell their scrolls to tourists as “folk Art”. The ability of indigenous Art survive.

Kalighat paintings
Kalighat paintings was a product of the changing urban society of the nineteenth century Calcutta. With the growing importance of the Kalighat temple as a pilgrimage centre in the British, Calcutta the scroll painters and the potters who had migrated from rural Bengal and settled in and around temple, practised this type of paintings. They used water colour and painted on mill paper with brushes made from squirrel and calf hair.

Kalighat paintings started on a religious note with the subjects being Hindu gods and goddesses a long with their incarnations. However over time, social sentiments came to be expressed in the medium of paper and colours. Kalighat paintings was the first of its kind in the Indian sub content and addressed customers directly. There were romantic depictions of women. There were satirical paintings lampooning the hypocrisies of the newly rich and the changing role of men and women after the introduction of education for women.

While some critics opine that Kalighat painting style has distinctive British influence others hold that local technique and social settings are entirely responsible for the kalighat style, of The figures depicted in Madhubani paintings. Fishes in madhubani for instance represents good luck, fertility and serpents are identified as divine protectors.

The skill has been handed down the generate mainly by women, in the families of the region, and hence the traditional designs and patterns are widely maintained madhabani paintings has remained confined to a compact geographical area, and the content and the style have largely remained the same. That is reason this has been given the G-I(Geographical indication) status.

Madhubani paintings got national recognition in 1970 when the president of India gave an award to Jagadan devi of jitbarpur village near madhubani.
Some of the famous names associated with this style of paintings in recent times are Bharti Dayal, ‘Ganaga Devi’, Bua Devi, Sita Devi etc.
Patua art

Pauta art of Bengal goes back some 1000 years. It is an art form native to west Bengal . Patuas like the kumars started out in the village tradition as painters of scrolls or pats telling the popular mangal stories of the gods and goddesses. The paintings are traditionally made from handmade paper backed with cloth, scrolls are typically 8 to 15 feet long and contain vibrantly painted scenes of a mythology or history stories indigenous plants and minerals are still used to create the paint including turmeric, vermillion and burnt rice. As the scroll is unrolled frame the artists narrates mythology and historical stories through song. Which typically lasts five to fifteen minutes.
Patua scroll painters wander from village. The village singing stories about pictures depicted in their scrolls and make a living. The stories also depict Hindu saints and Muslim saints with changing times, the patuas have Jadipatia

This form of paintings is practised in Dumka district of the state. Artists make the narrative scrolls called the “ Jado” or Jadopatia for the “ Santhals” of Dumka district, depict the santhal creation myth, the Tiger God and scenes from the afterlife, originally drawn from natural inks and colours. These paintings are belived to have magical and healing powers. They are used as visuals aids by the story telling Jadopatia painters. This is a languishing art. With great difficult we have been able to prove it.

Kalamkari paintings
As the name suggests kalamkari is the art of painting with a kalam i.e, a pen which is sharp pointed bamboo that regulates flow of colour. The art of paintings using organic dyes on cloth was popular in several parts of India, but this style of kalamkari flourished at kalahasti( 80miles North of Chennai) and at Masulipatnam(200miles East of Hyderabad).

The kalamkari tradition chiefly consists of scenes from Hindu mythology figures of deities with rich boarder embellishments were created for the temple. In Masulipatnam the weavers were involved in the block printings art, while at kalahasti, the Balojas( a caste involved in making bangles) took this art.
Owing to Muslims rule in Golconda, the Masulipatnam kalamkari was influenced by Persian motifs and widely adopted to suit their taste. The outlines and main features are done using hand carved blocks. The finer details are later done using pen.
The kalahasti tradition which developed in the temple region mostly concentrated on themes form Hindu mythology. Epics( Ramayana, Mahabharata) images of gods and heroes. The dyes are obtained by extracting colours form parts of plants- roots, leaves, along with mineral salts of iron, tin, copper and alum etc.
In the 20th century that this art started getting the attention and appreciation that it deserves.

Maharastra is known for its warli folk paintings. Warli is the name of the largest tribe found on the Northern out skirts of Mumbai in western India. Warlis carry on painting tradition going back to 2500 to 3000 B.C. their mural paintings are similar to those done between 500 and 10,000 B.C. in Bhimbetka, M.P, Rudimentary in style the wall paintings use a very basic graphic vocabulary involving a circle, a triangle and square. The circle and triangle are drawn from observation of nature . the circle representing the sun the moon, and the triangle could have been derived from the shape of mountains and conical shaped trees. The square, seems to be a human invention, indicating a sacred enclosure or a piece of land. The central motif in each ritual paintings is the square , know as the chauk or chaukat. Two triangles joined at the tip are used to represent human and animal bodies.

Women are mainly engaged in the creation of these paintings. These paintings do not depict mythological characters or images of deities, but depict social life. Images of human beings and animals along with scenes from daily life are created in loose rhythmic pattern. These tribal paintings are traditionally done in the homes of warlis. Painted white on mud walls, they are pretty close to prehistoric cave paintings in execution and usually dedicates scenes of hunting, dancing, sowing and harvesting.

Thangka paintings
Traditionally Thangka paintings are not only valued for their aesthetic beauty, but primarily for their use as aids in meditational practices. Practitioners use thanks to develop a clear visualization of a particular deity. Strengthening their concentration, forging a link between themselves and the deity. Historically thangkas were also used as teaching tools to convey the lives of various masters. A teacher or lama would travel around giving talks on dharma, carrying with him large thangka scrolls to illustrate his stories.
The sacred Art of thangka paintings dates back to the 7th century originating in Nepal it evolved in to several schools of paintings.
There are 3 types of thangkas one depicts the life of Buddha, his birth, his disillusionment with life, his search for enlightenment and his understanding of life.
* The second is more abstract representing Buddhist beliefs of life and death; on example could be wheel of life which symbolises the Buddhist belief of transmigratory existence.
* The third type consists of paintings that are often used as a tool for meditation or as offerings to the deities. These paintings are usually done against a white background. The colours used in Thangka have special significance.
White- serenity, Golden- birth or life, enlightenment, and parinir vana, red- for the intensity of passion, n-both love and hatred, black- anger, yellow- compassion, green- consciousness. The colours used in making a thangka are all vegetable or mineral dyes extracted from nature.
(The writer is a senior civil servant)