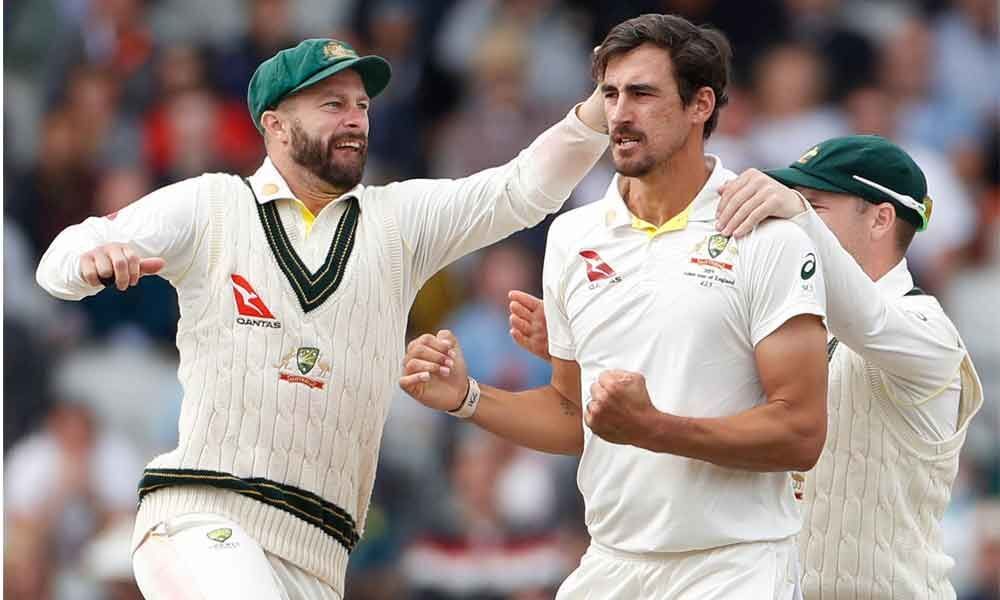 Australia crushed England by 185 runs on the fifth day of the fourth Ashes Test at Old Trafford on Sunday. Australia lead the five-match series 2-1.

Manchester : Australia crushed England by 185 runs on the fifth day of the fourth Ashes Test at Old Trafford on Sunday. Australia lead the five-match series 2-1.

Earlier, England were 166-6 at tea on the final day in a match in which a win for Australia would see the holders retain the Ashes at 2-1 up with one to play in a five-Test series.

Buttler, England's last recognised batsman, was 30 not out, with the usually free-flowing runscorer having faced 96 balls, while Craig Overton was unbeaten on 12 off 47 deliveries.

Any thoughts of England chasing down an imposing victory target of 383 had long since evaporated. Instead, with a new ball available to Australia 11 overs after tea, the question was whether they could hold out for a draw, which would leave the series all square ahead of next week's finale at the Oval in London.

England, resuming on their overnight 18-2, got through the first hour without losing a wicket. But when Ben Stokes, whose superb 135 not out had sealed a stunning win at Headingley, fell for just one shortly before lunch, the home side were floundering at 74-4.

England started the day with makeshift opener Joe Denly 10 not out and Jason Roy eight not out after Pat Cummins had taken two wickets in two balls on Saturday, including Joe Root for a golden duck, the England captain's third nought in five innings.

The most England had made in the fourth innings to win a Test was the 362-9 they posted at Headingley But their immediate goal was to bat out the fifth day for a draw -- something they had not done since Matt Prior helped them defy New Zealand at Auckland in 2013.

Denly was fortunate to see a loose drive off left-arm quick Mitchell Starc fly over the slips for four and he almost gave his wicket away when, despite England's desperate position, he lofted a sweep off Nathan Lyon's off-spin which just dropped short of deep midwicket.

World Cup-winner Roy, who has struggled to transfer his one-day international form into the Test arena, defended solidly before he cover-drive Starc for four. Fast bowler Cummins, however, struck again when a fine-off cutter found a gap between bat and pad to bowl Roy for 31.

Stokes falls cheaply: Stokes walked out to a huge ovation from a capacity 23,500 crowd. But he had made just one when Cummins, the world's top-ranked Test bowler, cut one back to the left-handed batsman, with Australia captain and wicketkeeper Tim Paine holding a good diving catch off the inside edge.

Stokes did not even wait for umpire Marais Erasmus to raise his finger before leaving the crease. Denly, who rode his luck to be 48 not out at lunch, completed a 112-ball fifty when he drove Starc down the ground for four.

But he was out soon afterwards for 53 when he gloved a Lyon delivery that turned and bounced out of the rough to Marnus Labuschagne at short leg.

Jonny Bairstow and Buttler were together for 14 overs until the former's 61-ball 25 ended when he was lbw to Starc.

Bairstow reviewed but, with Kumar Dharmasena's decision upheld on umpire's call, England were 138-6. Cummins thought he had his fifth wicket of the innings when Overton, on five, was given out lbw only for Erasmus's decision to be overturned after a review revealed the ball had pitched outside off stump.