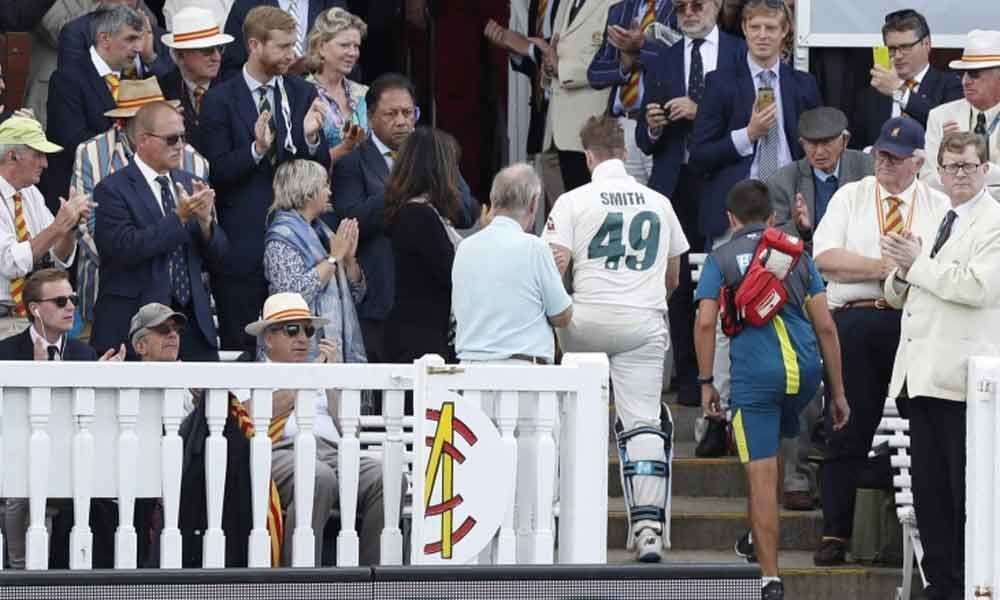 Former cricketers from England and Australia were united in condemning a section of fans at Lord's for booing Steve Smith when the latter returned to the crease on Day 4 of the second Ashes Test on Saturday.

London : Former cricketers from England and Australia were united in condemning a section of fans at Lord's for booing Steve Smith when the latter returned to the crease on Day 4 of the second Ashes Test on Saturday. Smith received a sickening blow to his neck below his ear off a short delivery from Jofra Archer because of which he had to retire hurt.

Smith was batting on 80 when he departed, but he came back after the fall of the next wicket. While the Lord's crowd gave him a standing ovation when he was walking off and they largely did the same when he returned, boos could be heard from some sections of the stands.

Similarities have since been noted between the blow that Smith received and the one that the late Phillip Hughes got in a domestic game in Australia which eventually led to his death in 2014. Smith has been on the receiving end of boos throughout Australia's long stay in England which included the 2019 World Cup.

Spin legend Shane Warne, who is one of the commentators for the Ashes series, said on air that booing Smith in other instances is one thing, but this was different.

"Just get up, clap and say that's courageous, very brave," he said.

Former Australia captain Mark Taylor, who's also a commentator for Nine Network, said that the boos were "very disgusting". "Lord's won't be happy with that either. They don't like any 'yobbo' element of crowd behaviour," he said.

Former England captain Michael Vaughan tweeted, "I get the pantomime of Steve Smith's arrival to the crease and the booing, but please stop booing once he plays with great skill, courage and incredible discipline. He deserves a standing ovation for that innings."

Interestingly, England's foremost fan group Barmy Army, which booed Smith throughout his extraordinary twin centuries in the first Test at Edgbaston, tweeted in support of the former Australia captain.

"We are not at Lord's and we are not booing Steve Smith," they said. "He took a horrible blow to the head, and we wish him the best in his recovery."

Akhtar slams Archer for not showing 'courtesy' after Smith bouncer:

"Bouncers are a part & parcel of the game but whenever a bowler hits a batsman on the head and he falls, courtesy requires that the bowler must go & check on him. It was not nice of Archer to just walk away while Smith was in pain. I was always the first one to run to the batsman," Akhtar tweeted.