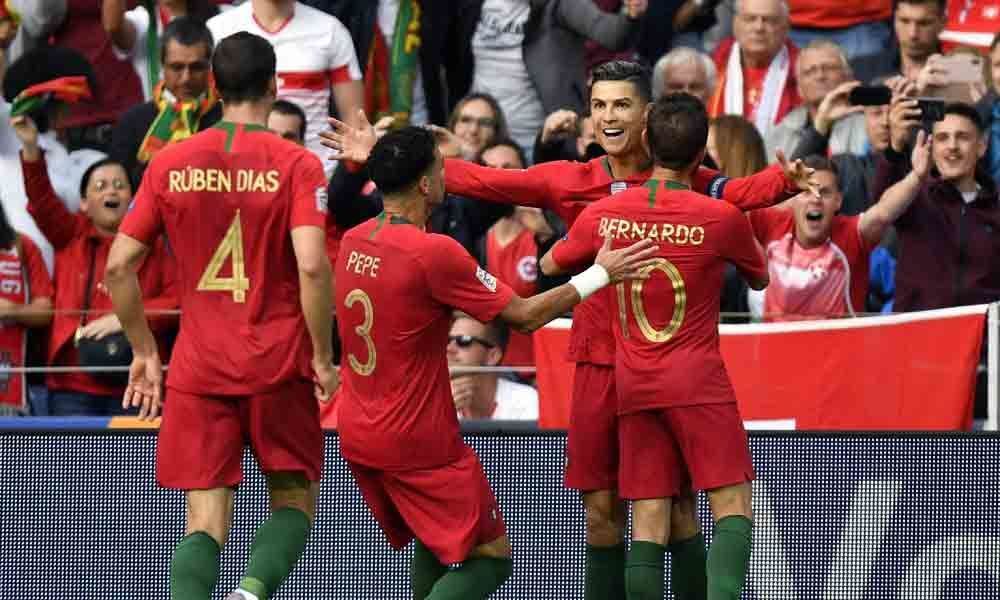 Cristiano Ronaldo scored a hat-trick to lead Portugal to a 3-1 victory over Switzerland and a berth in the 2018-2019 Nations League final.

Porto (Portugal) (IANS): Cristiano Ronaldo scored a hat-trick to lead Portugal to a 3-1 victory over Switzerland and a berth in the 2018-2019 Nations League final.

In Sunday's first-ever championship match of this new UEFA international tournament, the Portuguese will square off against either the Netherlands or England, reports Efe news.

On Wednesday, a high press paid dividends for the home team in the early going at Dragao Stadium when Bernardo Silva stole the ball in the opposing team's area and delivered an exquisite pass to Ronaldo, although the Juventus superstar failed to beat Swiss net minder Yann Sommer on that occasion.

After a pair of missed chances by the Swiss, one on a venomous cross by Xherdan Shaqiri and another on a header by Portuguese-league star Haris Seferovic, Ronaldo opened the scoring for Portugal on a free kick to the bottom right corner in the 24th minute.

The five-time Ballon d'Or winner, who had not scored for Portugal since last year's World Cup, had been fouled moments earlier just outside the area by Kevin Mbabu.

That score held up until halftime, although Seferovic nearly notched the equaliser shortly before the intermission on a shot that clanked off the crossbar.

Shortly after the break, the action heated up when Switzerland clamoured for a penalty at one end of the field and referee Felix Brych awarded one to Portugal moments later at the other end. That decision, however, was reversed after a review by the Video Assistant Referee (VAR) system, with Brych ruling that Swiss midfielder Steven Zuber had been fouled in the area by defender Nelson Semedo.

Meanwhile, the penalty that Portuguese midfielder Bernardo Silva had won at the other end after being tripped by center back Fabian Schar was waived off.

The controversial turn of events on the field did not go down well with the crowd at Dragao Stadium, but it led to the equalizer when Ricardo Rodriguez fired the ball home from the spot past Portuguese net minder Rui Patricio in the 56th minute.

Portugal then suffered a fresh setback when Pepe suffered an injury on a hard fall and was replaced by Jose Fonte in the 63rd minute.