Breaking the 'Big Three' Slam stranglehold - over burger and fries 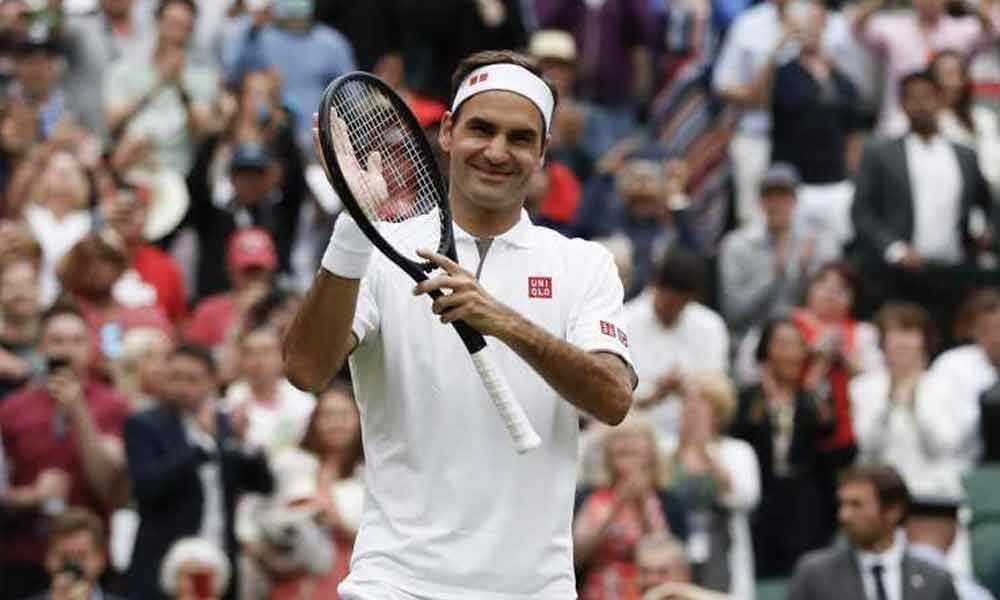 Roger Federer is one win away from his 100th victory at Wimbledon after making a 17th quarter-final, but told the wilting chasing pack that they could find hope in their pursuit -- over a humble happy meal.

London: Roger Federer is one win away from his 100th victory at Wimbledon after making a 17th quarter-final, but told the wilting chasing pack that they could find hope in their pursuit -- over a humble happy meal.

The eight-time champion, as well as Novak Djokovic and Rafael Nadal, moved into the last-eight on Monday with embarrassing ease. The trio, with 14 Wimbledon titles, dropped only 19 games between them, facing a grand total of just one break point. Federer breezed past Italy's Matteo Berrettini 6-1, 6-2, 6-2 in just 74 minutes to make sure of a 55th quarter-final at the Slams. It was his 99th win at the All England Club and at 37, he is the oldest man to reach the last eight at the majors since 39-year-old Jimmy Connors at the 1991 US Open.

Despite Berrettini being 15 years his junior, the Italian carved out a meagre 11 points on the Federer serve in a brutal Centre Court demolition. However, Federer told his bewildered opponent not to lose heart, recalling some desperate defeats that he suffered in his own early career. "One day at the US Open, I played Max Mirnyi, I waited 10 hours to play, it was raining all day," said Federer of his 2002 visit to New York. "They sent me out at 11:00pm, I believe, Court Eight, lost in straight sets, went to McDonald's at two in the morning. "You're like, What happened? Some losses you can't explain.

"It's okay to take a step back, but then you have to take two forward. I hope that's what he does exactly from today on." Twelve months earlier at the US Open, Federer's confidence, which had sky-rocketed with his famous triumph over Pete Sampras at Wimbledon, came crashing down. Against Andre Agassi in the fourth round, he managed to win just seven games. - 'Take out Andre? Nah' -"I thought I was going to take Andre out. Nah. You get smashed, go home, don't understand what happened," added Federer who was told by Berrettini at the net: "Thanks for the lesson". "You realise, Well, I've just got to work harder. It's that simple," added the Swiss. Defending champion Djokovic was just as dominant seeing off French rookie Ugo Humbert 6-3, 6-2, 6-3 to reach the Wimbledon last-eight for the 11th time, and 45th time at the Slams.

Nadal, a two-time winner, saw off Portugal's Joao Sousa 6-2, 6-2, 6-2 for his seventh quarter-final slot and 39th overall at the majors. Djokovic said he, Federer and Nadal are so dominant because they "transcend the sport". "I am the player that I am today because of these guys, because of the rivalries I have with two of them," said the four-time champion. - 'Brady, LeBron' - "It does transcend. It's like Tom Brady (in the NFL), for example, who at his age is still playing on the top level, winning rings and everything. LeBron James (in NBA), Serena Williams." Nadal, on 19 majors and just one behind Federer who he could face in the semi-finals this week, believes the pack will catch up.

However, he does not want to put a time-frame on when that might be. After all, he, Federer and Djokovic have amassed an astonishing 54 Grand Slam titles between them. Of other active players, Andy Murray and Stan Wawrinka have three apiece while Marin Cilic and Juan Martin del Potro have one each. "I am not thinking about sending a message to anyone or the next generation, how they are coming or not. I know they're good. "I know there's going to be a day that they are going to be in front of us because they will play better than us or because we are leaving. We are not kids any more."