All set for I-Day fete at Golconda Fort 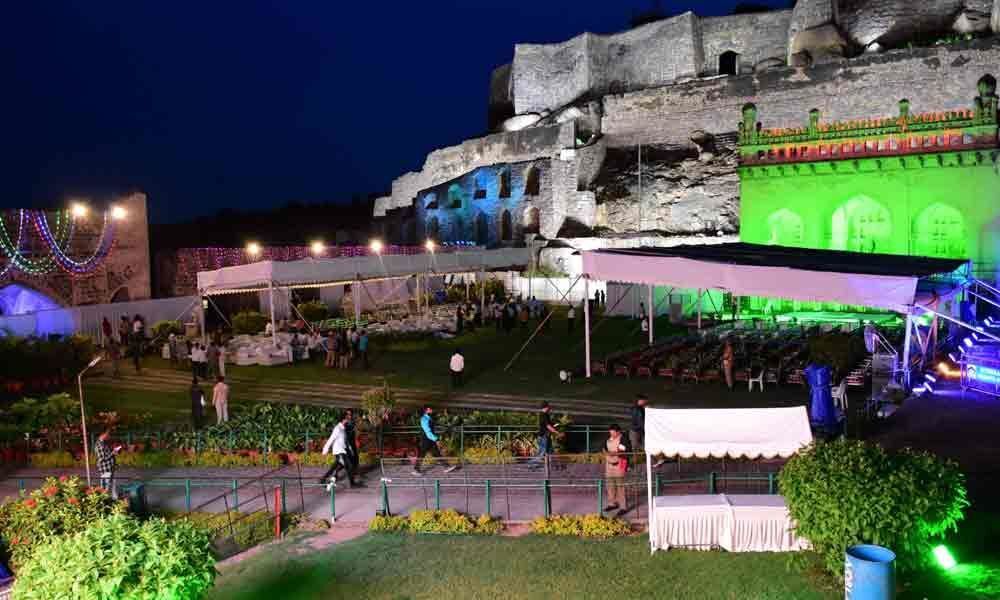 The stage is set for 73rd Independence Day celebrations at the historic Golconda Fort on Thursday.

Hyderabad: The stage is set for 73rd Independence Day celebrations at the historic Golconda Fort on Thursday. All arrangements have been made for parade and flag hoisting by Chief Minister K Chandrashekar Rao.

The fort has been tastefully decorated with colourful lights. Telangana state police and Odisha police force will participate in the parade. "Our special contingent force is going to represent Telangana in Bhubaneshwar," according to police sources. While the celebrations at the Golconda Fort would begin from 7.30 am, Chief Minister will unfurl the flag at 9.30 am.

According to officials, KCR will showcase the achievements of the government and various welfare measures that have been taken up by the state government and will also explain what it proposes to do for the people in its second term. The government employees are keeping their fingers crossed as they expect that KCR will make some announcement about the pending issue of PRC and notification for jobs for youth.

But officials said that KCR is unlikely to announce fresh sops in view of growing financial burden on state exchequer after the enforcement of Rythu Bandhu scheme which costs nearly Rs 15,000 crore per annum. However, he may mention about the governments assurance to waive off farm loans. The scheme, which is to be launched this year, is likely to figure in the speech, sources say.

Meanwhile, elaborate security arrangements have been made at the venue for the conduct of the celebrations on a grandscale. Special forces were deployed and the entire fort was under electronic surveillance. Several cultural programmes are also being organised. Medals and awards will be presented to the police personnel and government officials who excelled in their services.