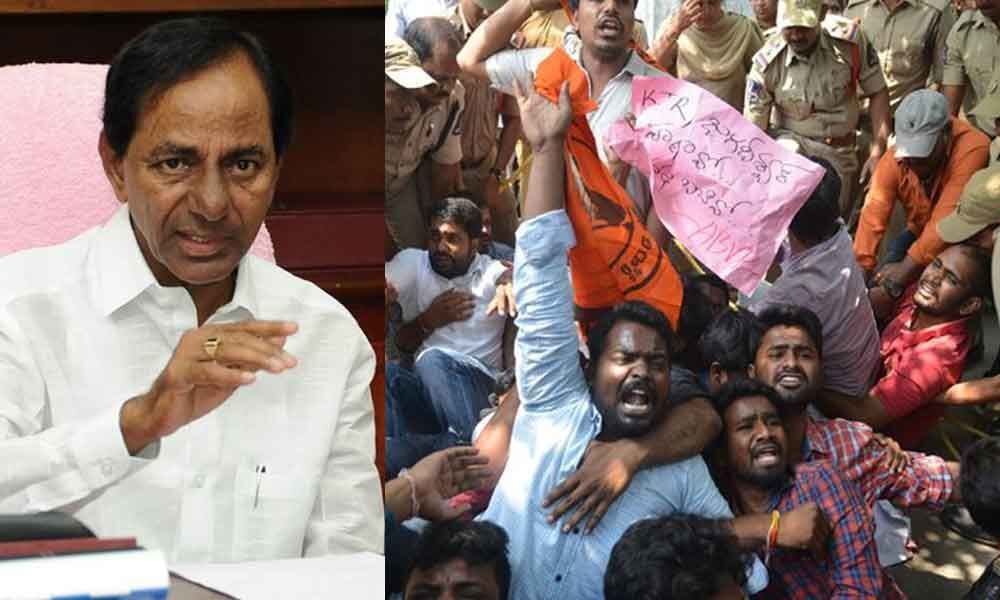 Chief Minister K. Chandrashekhar Rao has issued instructions to the Officers concerned to get done free of cost the Re-verification and Re-counting of papers of all the Intermediate students who failed in the examinations.

Hyderabad: Chief Minister K. Chandrashekhar Rao has issued instructions to the Officers concerned to get done free of cost the Re-verification and Re-counting of papers of all the Intermediate students who failed in the examinations.

The Chief Minister said that in case if the students who passed prefer Re-verification and Re-counting it would be done as per the prevailing norms and regulations. He further instructed that the Re-verification and Re-counting process should be expedited and completed as early as possible and should be followed with conducting the advanced supplementary examinations so that the academic year is not lost. He entrusted the responsibility of conducting Re-verification, Re-counting and advanced supplementary examination to Education Secretary B. Janardhan Reddy.

KCR also instructed the officers to evolve a strategy for smooth conduct of examinations and evaluation without any problems for future. He expressed shock over suicides of few students who failed in the intermediate examination describing it as most unfortunate. He has appealed that no student should resort to commit suicide as failing in intermediate is not meant to end the life.

The Chief Minister held a review meeting on Wednesday at Pragati Bhavan on the subject of events that happened following the declaration of intermediate results. Minister of education G. Jagadeesh Reddy, Educational secretary Dr. B. Janardhan Reddy, Secretary Board of Intermediate Education Dr. A. Ashok, Chief Advisor to the Government Rajeev Sharma, CMO officers Rajashekar Reddy, Bhoopal Reddy participated in the review meeting. The review covered the issues of intermediate examination papers valuation, results declaration and the events that took place subsequent to results declaration. The Chief Minister took several important decisions in the review meeting.

"This year 9.74 lakhs of students appeared for the intermediate examination. Out of these 3.28 lakhs failed in the examination. Some students and their parents are of the opinion that during the process of addition of marks mistakes took place resulting in fewer marks than expected and hence they failed. This is the reason why facility has to be provided for Re-verification of papers of failed students free of cost. The Re-verification could be done in the subject in which the student failed and in the same Re-counting would also be done.

In case if any student who passed the exam also desires Re-verification then it would be done on payment of fees as per the earlier and prevailing procedure. The Re-verification and Re-counting process should be completed at the earliest. In view of the fact that the students will have to attend to NEET and JEE countrywide Entrance Tests, the advanced supplementary examinations should also be conducted at the earliest and also the results to be declared at the earliest," said the Chief Minister issuing clear instructions to the officers.

"The government is facing problems every time whenever intermediate examinations and EAMCET Tests are conducted. The government, the students and their parents had to face headache every time. This needs to be avoided. It has to be examined whether the responsibility of conducting examinations could be entrusted to an autonomous body. The best practices elsewhere in other states and other countries are to be studied for implementing in our state. In future examinations are to be held in such a manner so that there would not be any problems. For this the process has to begin from now onwards" said the Chief Minister.

The Chief Minister also enquired about the identification of out sourcing agencies and their capacity to process the data of the intermediate students as well as declaration of the results. The officers briefed the CM that the identification was done based on tender process and the responsibility was entrusted to the company which quoted the lowest tender. The capacity of the out sourcing agencies who submitted tenders was assessed by technology experts and experienced board members and everything was done as per the norms and procedures.

"It is unfortunate and highly saddening to note that few students who failed in the intermediate examination committed suicides. I felt extremely unhappy and deeply hurt over such incidents. Suicide of students is most unfortunate. Intermediate education is not the whole life. Failing in examination does not amount to failing in the life. Life is precious. Though one fails in the examination, there will be plenty of opportunities. According one's own interest and capacity one should make use of opportunities and identify a profession of their liking. They should stand up in the life and be courageous. If you commit suicide you will be leaving behind lot of sorrow to the parents. I appeal to every student not to commit suicide" said the Chief Minister.