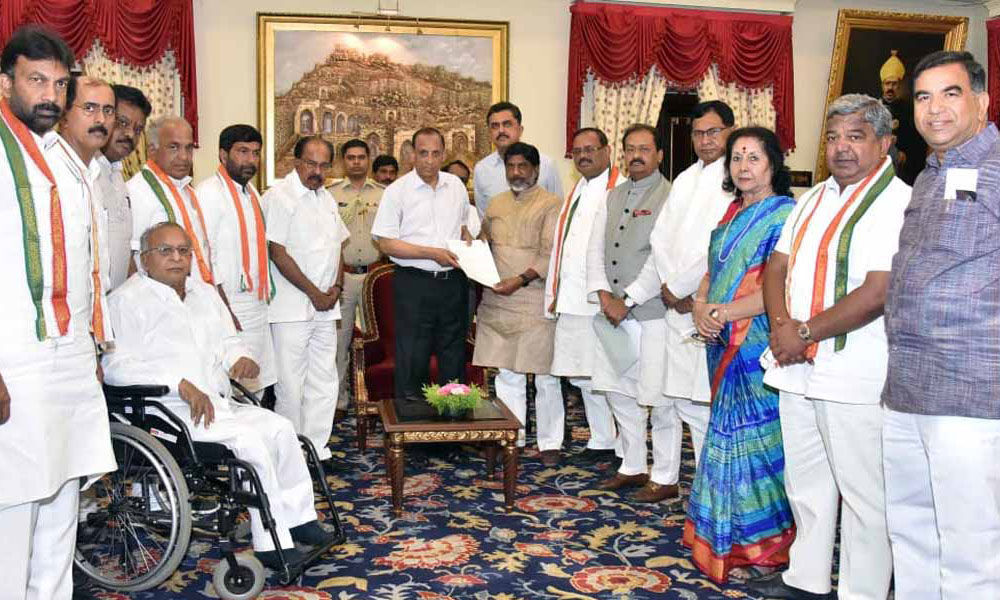 A delegation of Congress leaders called on Governor E.S.L. Narasimhan at Raj Bhavan on Saturday seeking imposition of President's Rule in Telangana State and disqualification of nine Congress MLAs who defected to ruling TRS party.

Hyderabad: A delegation of Congress leaders called on Governor E.S.L. Narasimhan at Raj Bhavan on Saturday seeking imposition of President's Rule in Telangana State and disqualification of nine Congress MLAs who defected to ruling TRS party.

"The above mentioned Legislators, who got elected from the Indian National Congress in the recently concluded Assembly elections for the State of Telangana, have been invited by Chief Minister K.Chandrasekhar Rao to join his party and accordingly the above mentioned MLAs gave statements that they are prepared to strengthen the TRS political party led Government, which amounts to voluntarily giving up to the membership of the political party to which they got elected. The Chief Minister, who has been appointed by your Excellency under Article 164, has the bounding duty to the Constitution of India under III Schedule to abide by the Constitution and its mandates. However, in violation of the oath or affirmation of office administer, the Chief Minister is encouraging defection by calling the above mentioned MLAs to his camp office/official residence of the Chief Minister and taking them into the TRS party fold and giving party membership of the Telangana Rashtra Samithi," they said in the petition.

"The Chief Minister, even after the Model Code came in to being for the ensuing Parliament Election in the year 2019, is encouraging defections and his camp office is the venue for the unconstitutional and immoral and illegal defections. Such an immoral person cannot be continued as a chief minister. It is relevant to note here that Aaya Ram Gaya Ram was a phrase that became popular in Indian politics after a Haryana MLA Gaya Lal changed his party thrice within the same day in 1967. The anti-defection law sought to prevent such political defections which may be due to reward of office or other similar considerations," the Congress leaders said.

The Congress leaders pointed out that the Tenth Schedule was inserted in the Constitution in 1985. It lays down the process by which legislators may be disqualified on grounds of defection by the Presiding Officer of a legislature based on a petition by any other member of the House. A legislator is deemed to have defected if he either voluntarily gives up the membership of his party or disobeys the directives of the party leadership on a vote. This implies that a legislator defying (abstaining or voting against) the party whip on any issue can lose his membership of the House.

The law applies to both Parliament and state assemblies. The law provides for a member to be disqualified if he 'voluntarily gives up his membership'. However, the Supreme Court has interpreted that in the absence of a formal resignation by the member, the giving up of membership can be inferred by his conduct. In other judgments, members who have publicly expressed opposition to their party or support for another party were deemed to have resigned, they said in their memorandum.

"There have been several cases where the Courts have expressed concern about the unnecessary delay in deciding such petitions. In some cases this delay in decision making has resulted in members, who have defected from their parties, continuing to be members of the House. There have also been instances where opposition members have been appointed ministers in the government while still retaining the membership of their original parties in the legislature. Position after the coming into force of Tenth Schedule as per Practice & procedure of Parliament by G.C.Malhotra (5th Edition).

After the coming into force of the Tenth Schedule to the Constitution with effect from 1 March, 1985, and the Representation of people (Amendment) Act, 1988 (which introduced Section 29A providing for compulsory registration of all political parties), the concept of recognition of Parliamentary Parties/Groups has materially changed vis a vis the recognition of Parliamentary Party/Group by the Speaker on the basis of the numerical strength of a party in the House," they said.

For the purpose of the Tenth Schedule, all the members of the House belonging to a particular political party would be deemed to belong to the 'Legislature Party' of that party in the House irrespective of the numerical strength of that 'Legislature Party'. Even a lone member of a political party in the House would, therefore, have a Legislature Party by that name. However, those members who contested and won elections to the Lok Sabha as independent candidates and those who have been nominated are shown as per their status, i.e. independent or nominated members, as the case may be.

Therefore, after the advent of Xth Schedule to the Constitution of India, there is no question of recognizing any member who got elected from one symbol as a member of another political party of another symbol. However, there are instances wherein your Excellency allowed a member of Telangana Telugudesam political party to become a Minister of TRS Government without the said member resigning to the membership his original political party, the Congress leaders argued in their petition.

The Congress leaders expressed hope that the Governor would not only discharge his duty to the Constitution but also responsibility to the democracy. Therefore, they requested him to send the copy of representation to the to the President of India and Union Ministry to impose Presidents rule by invoking Art 356 of the Constitution Of India.