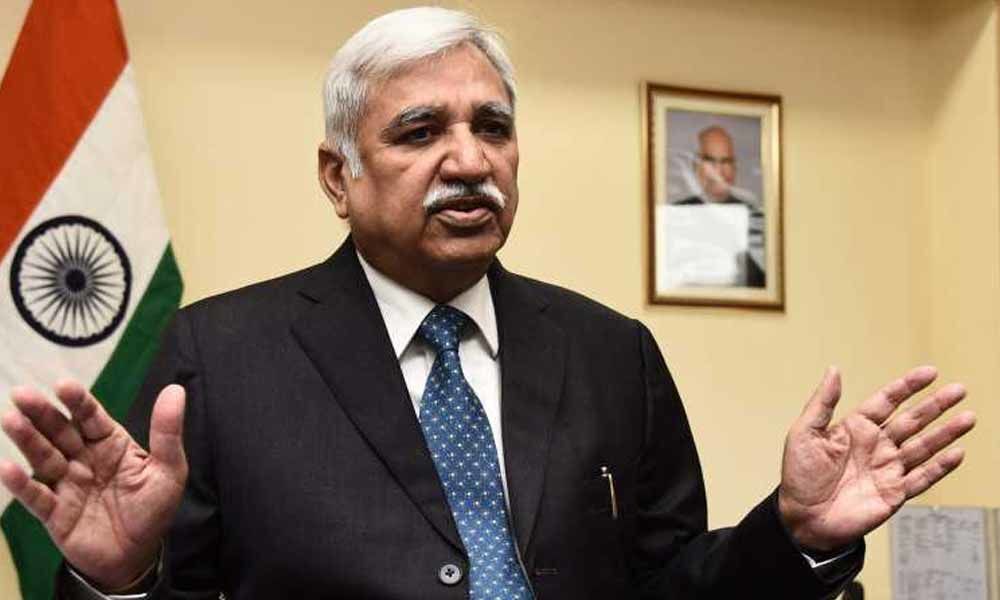 Hyderabad: A delegation of Congress leaders met Chief Election Commissioner Sunil Arora in New Delhi on Friday complaining of inaction against Chief Minister K. Chandrashekahr Rao and other TRS leaders for violation of Model Code of Conduct in Telangana.

"The Chief Minister is using the government accommodation - Pragathi Bhavan, as his office-cum-residence. He has been violating the MCC on several occasions, since the 2014 elections. During the course of the biennial elections to the Telangana Legislative Council in 2015, our party filed a complaint that after the MCC came into existence on November 24, 2015, as CM of Telangana, Chandraseklhar Rao addressed a meeting organised to admit Congress leaders from Khammam district into TRS on November 28 at this official camp office. ECI had promptly issued a notice to KCR. In spite of such a notice being issued in the past and having full knowledge about the implications of the existence of the MCC, Chandrasekhar Rao continues to behave in an autocratic manner with gross disrespect for the rule of law and blatant violation of the Code," said TPCC Election Commission Coordination Committee Chairman Marri Shashidhar Reddy in his petition. He was accompanied with senior leader G. Nirajnan.

"The last representation referred to in the preceding paragraph is not just about the use of the government accommodation but the drama that was enacted through it to gain wide publicity for electoral gains. There is no doubt that a Chief Minister is required to respond to emergencies, serious problems and incidents but this particular case does not fall under such categories. This is not a problem that has suddenly cropped. This is one of the 2.5 lakh errors in land records and revenue passbooks which the officials have not rectified for more than a year. The enclosed CD contains the video clippings which were telecast live on T News, ETV and 10 TV Telugu TV channels ranging from 15 to 27 minutes. This establishes that it was totally planned to gain undue political advantage during the ensuing elections," the Congress leaders complained.

The following day, this news was very prominently carried in the print media, not to speak about the social media. It was made to appear that the CM called the farmer only after seeing the plight of the farmer on the social media. During the conversation the CM assured the farmer that the district Collector will visit his house within 2 hours and issue certificate and make payment under the "Rythu Bandhu" scheme. He also assured that the local revenue official will be suspended. Further, he asked the farmer to post it again on the social media after the problem is resolved to get further publicity. Ironically the next day, it was disclosed by a relative of that farmer that there has been a family dispute. This has been reported in the print media.

"It has been reported in the media that the District Collector Mancherial district skipped the video conference with CEO Telangana, giving the excuse of urgent official work. During the election process this cannot be more important as this was not an emergency which has suddenly arisen. Strict action should be taken against the District Collector for neglecting election duties," Shashidhar Reddy said.

The Congress leaders said inauguration of the III Phase of the Hyderabad Metro on March 20 by the Governor of Telangana inspite of complaint to the CEO Telangana not to allow such a programme as it will be a violation of the MCC. "We had clearly pointed out that it was necessary, such inaugurations can be done Civil Servants and the Governor, tough he is former Civil Servant, he does not fit into that category for the purpose of MCC. The whole programme that day was telecast live for more that 45 minutes even after we were assured by the CEO that it will not be allowed," he said.

After the last date of withdrawal, there are about 185 candidates in there fray for the Nizamabad LS Seat. While it has been made clear that EVMs will not be utilised for this election, the statement of the CEO that the matter is being referred to the ECI, amidst reports of a possible postponement of this election, citing some other instance of postponement by about a month in one case. However, in the past when about 480 candidates were in the fray in Nalgonda LS election, it was conducted on time using ballot paper. "There are serious apprehensions that the a situation may be created by the ruling party / state government whereby the election is postponed since CM's daughter is the present MP from there and is in the fray again. If postponed, it will enable the ruling TRS party to literally invade the constituency and not allow free and fair polling. We demand that the polling in Nizamabad LS constituency should be held as scheduled and not postponed at any cost," Shashidhar Reddy demanded.

The Congress leaders also complained that the faces of the statues of former Prime Ministers Late Indira Gandhi and Rajiv Gandhi are being covered in the name of the MCC. They are national leaders and made supreme sacrifice and this practise should be stopped, he said.

Further, he informed that a bio-pic of CM Chandrasekhar Rao titles - Udyama Simham has been released. This should be considered as a violation of the MCC and appropriate action be taken, he said.

The Congress leaders also alleged that large number of political leaders and workers belonging to opposition parties were being harassed by the state police. "Strict instruction should be given to them to conduct themselves in an impartial manner, they demanded.