Give genuine candidates a fair deal in police recruitment: Congress 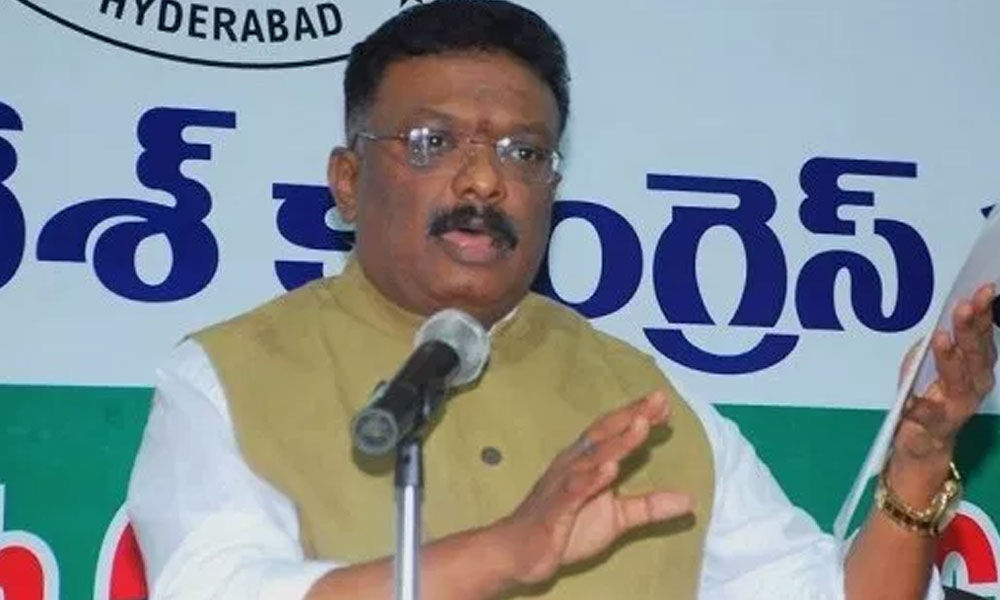 All India Congress Committee (AICC) Spokesperson Dr. Sravan Dasoju on Thursday reiterated the demand for a probe into the irregularities in police recruitment being done by the Telangana State Level Police Recruitment Board

Hyderabad : All India Congress Committee (AICC) Spokesperson Dr. Sravan Dasoju on Thursday reiterated the demand for a probe into the irregularities in police recruitment being done by the Telangana State Level Police Recruitment Board (TSLPRB).

"The TSLPRB has initiated the process of recruitment of 18,435 Police Constables, Assistant Sub Inspectors and Sub Inspectors on different posts through separate notifications. Over 7.19 lakh aspirants applied for the job and also paid an application fee. However, we regret to say that the TSLPRB has failed to conduct the recruitment tests in a scientific and fool-proof manner," Sravan told Governor E.S.L. Narasimhan in an Open Letter.

The Congress leader said that the same youth who fought for Telangana are the ones who applied for these jobs. "Most of them are post graduates and even research scholars who applied for constable jobs. This indicates the gravity of unemployment in Telangana. They waited for all most five years for this recruitment. Most of them belong to poor and downtrodden sections who spent thousands of rupees for coaching in private institutions. The inefficiency of TSLPRB has enabled malpractices in this entire recruitment process," he alleged.

"If a wrong person enters the service through dubious means, you being an ex police officer, would be able to guage the likely negative impact on the policing. Also genuine candidates should be given fair deal. I wish to submit to you that couple of employees of E-soft Consultancy, a private agency which was assigned the task of conducting the RFID tests, were caught when they were indulging in tampering of RFID and test results. Unless one conducts thorough enquiry into this entire process, we would never be able to nab the other culprits, if any. You may kindly notice that many news of malpractices in the recruitment have appeared in newspapers. But there was no action from government in this regard," he said.

Sravan said that the issue was raised by thousands of candidates across Telangana seeking justice. However, he said that it was pathetic that there was no one in the government to at least to listen to and respond to the grievances of candidates. Even, the Congress party made an open appeal to the government to launch an enquiry into alleged malpractices. But as usual the government is immune and no response to make any corrections, if needed, he said.

Sravan informed that a total of 224,741 students appeared for (Physical Measurement Test) and (Physical Efficiency Test) conducted by the board and 1,17,660 have qualified. However, many candidates complained that neither any format was fixed to conduct the test nor any precedents were followed. For the first time, the Board used Radio Frequency Identification (RFID) tags for physical fitness tests as part of the recruitment for stipendiary police constable and sub-inspector posts. The RFID works were assigned to a private agency eSoft. However, the discrepancies in use of RFID tags has allegedly deprived thousands of eligible youth an opportunity to get a police job. While separate notifications were issued for different posts, physical tests were jointly conducted for all the aspirants and posts without even taking into consideration the gap between average age of applicants for SI and Constable posts, their experience and level of preparedness, he said.

The Congress leader pointed out that there were huge flaws in conduct of 800 metres (400 x 2) race with a qualifying time of 170 seconds. As against the universal standard norms of having only 4-6 members at any given point of time on the track, callously 50-60 candidates, like sheep, were made to run on the track at the same time. Consequently, the candidates were unable to run freely and had to waste time facing human blockages on over-crowded track. Due to this system, many efficient and deserving candidates faced disqualification due to loss of 4-5 seconds, he alleged.

Sravan also alleged that no orientation programme was held for the candidates on how the RFID system works. Even the officials who were deployed to conduct these tests also were not aware of the functioning of RFID. Further, there was no mention of RFID in the notifications issued by the TSLPRB. The measurement of milli-nano seconds was also applied although this count is not even applied or valid in Olympic race. There was no clarity on where the RFID system begins or ends and all the results were selectively picked. In some centers, a whistle was blown to start the race, but the end of the race was defined by the RFID, he said.

"In many centers, it was brought to our notice that officials allowed massive impersonation, which duplicate candidates seem to have taken part in physical tests and no check on that from the police officials," he said.

Citing an instance, Sravan said one candidate, Manthri Rajitha, had appeared for a police recruitment exam held in 2016 and even appeared for the mains. However, when she again applied for a post in 2018, she was disqualified on the grounds of height. She was shown shorter by an inch than the qualifying height. "How is it possible that the height of a candidate got reduced between two interviews?" he asked. Similarly, the height of another applicant Nikhil Raj was 168 cm which met the eligibility criteria of 167.8 cm. But his height, due to use of RFID, was shown as 172.5 cm. Although the candidate was eligible in both the conditions, the huge difference in figures exposes the discrepancies in recruitment process.

Only one sensor was reportedly installed at few test centres like Sangareddy and Nalgonda where beginning point of 100 metres was manual and end point was sensor-based. Some cases of impersonation too are reported to have occurred during the recruitment process, he said.

"When thousands of candidates complained of irregularities, they were reportedly given an assurance that a committee would be appointed and their grievances would be addressed. They were called by the office of TSPRB Chairman A. Srinivas Rao to Amberpet police grounds on 28th and 29th March. When more than 5,000 applicants visited his office, neither a committee was constituted nor were they allowed entry into the premises. The aggrieved candidates were threatened of lathicharge and arrest and without any discussions, they were dispersed by police and rapid actions forces," Sravan said.

The Congress leader appealed to the Governor to order a high-level probe into recruitments done so far and conduct the exams afresh in a scientific, transparent and accountable manner so as to protect the careers of thousands of aggrieved candidates.