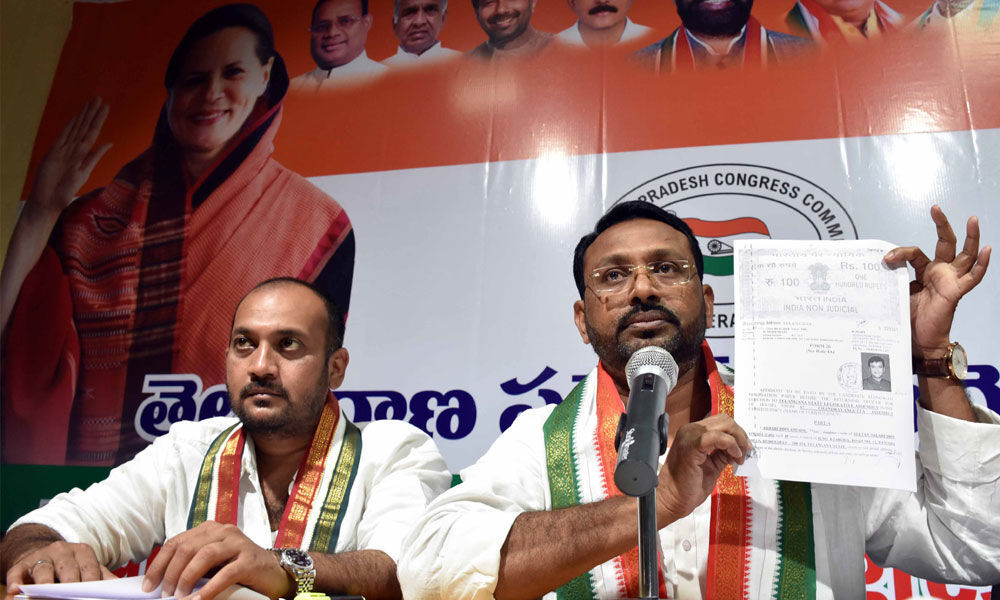 The Congress party on Thursday demanded that AIMIM President Asaduddin Owaisi and his MLA brother Akbaruddin Owaisi declare their sources of income to justify the accumulation of huge assets during the last 15 years.

Hyderabad: The Congress party on Thursday demanded that AIMIM President Asaduddin Owaisi and his MLA brother Akbaruddin Owaisi declare their sources of income to justify the accumulation of huge assets during the last 15 years.

Addressing a press conference at Gandhi Bhavan, TPCC Official Spokesperson Syed Nizamuddin and Hyderabad City Congress Committee (HCCC) Minorities Department Chairman Waliullah Sameer, said that the assets declared by Owaisi brothers in their affidavits submitted while filing nomination papers do not match with their known sources of income. "Their economic growth in the last 15 years, especially during the last five years under BJP rule, was better than any businessman," they said.

Quoting the figures from the election affidavits, the Congress leaders pointed out that MIM President Asaduddin Owaisi had declared assets of just Rs. 39.02 lakh in 2004. It increased to Rs. 93.02 Lakh in 2009, Rs. 4.06 crore in 2014 and this year he declared assets of Rs. 13 crore. Similarly, the assets of Chandrayangutta MLA Akbaruddin Owaisi increased from Rs. 4 crore in 2004 to Rs. 7.91 Cr in 2009, Rs. 17.50 Cr in 2014, Rs. 24 Cr in 2018 and this year, they increased to Rs. 24.53 Crore. "There is nothing wrong in earning huge wealth. But when the accumulated wealth does not match the known sources of income, it gives rise to suspicion that it might have been earned through corruption, land grabbing or other illegal means," the Congress leaders said.

"While the Owaisi brothers got richer and richer after every election, their voters remained poor. Almost 23% of people living in Hyderabad are poor and almost 13% of them are living Below Poverty Line. Nearly 16% of children are unable to go to school due to poverty. Most of the people living in Old City are having huge debts. Nearly 22.1% of children between 6-14 years are illiterates while 46% of people in age group of 15-21 are illiterates," Syed Nizamuddin said adding that they Owaisi Brothers would be remembered as 'Crorpati leaders of poor Hyderabadis'.

The Congress leaders pointed out that Asaduddin Owaisi is constructing a house on 4 acres of land with a built up area of 36,250 sft in Shastripuram. However, they said nearly 84% Muslims in Old City are living in houses which are smaller than 100 sft. While not a single double bed room house has been delivered to poor people in Old City due to shortage of funds, Asaduddin Owaisi was constructing his palatial residence worth Rs. 15 crore (as per affidavit) by taking loans of Rs. 9.30 crore. They said Akbaruddin Owaisi had given loans of Rs. 6.72 crore to various people including Rs. 5 crore to his elder brother. He said at least 100 jobless youth of Old City would have got employment if he would have extended a loan of Rs. 1 crore to them.

"Is it not strange that Owaisi brothers managed to earn crores of rupees under the BJP regime when mainstream businessmen were hit due to demonitisation, GST and other factors. While Asaduddin Owaisi's assets got tripled in this period, Akbaruddin Owaisi added over Rs. 7 crore to his assets in last five years," the Congress leaders pointed out.

Sameer demanded that Owaisi Brothers disclose their sources of income to clear all suspicions and also share the secret of their success which could help people of Hyderabad who are reeling under extreme poverty since several decades.