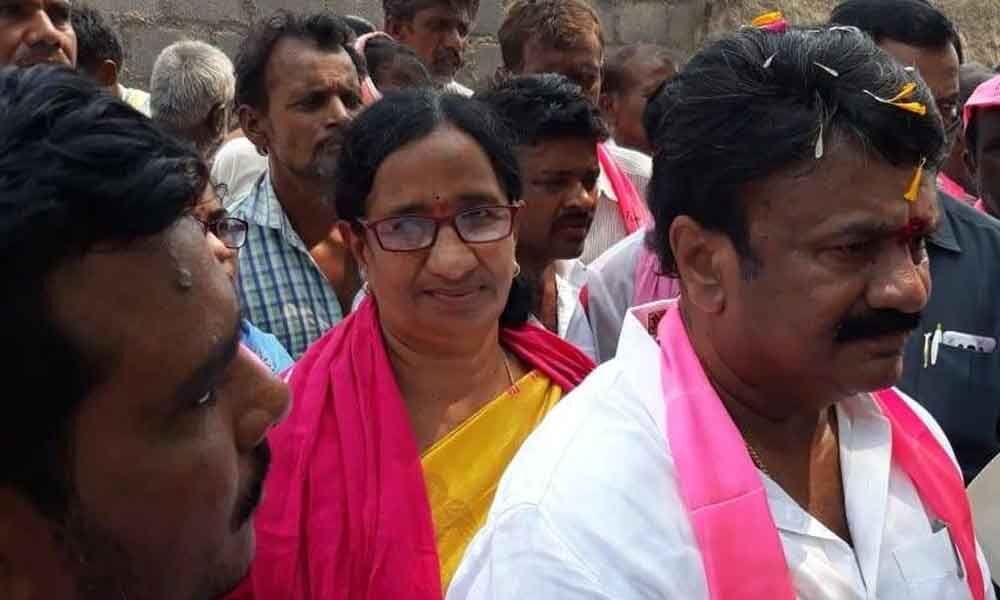 Animal Husbandry and Cinematography Minister Talasani Srinivas Yadav has criticised Congress leaders for making comments against the State government on one hand and for getting the benefits of welfare schemes being implemented by Chief Minister K Chandrashekar Rao on the other.

Nagarjuna Sagar: Animal Husbandry and Cinematography Minister Talasani Srinivas Yadav has criticised Congress leaders for making comments against the State government on one hand and for getting the benefits of welfare schemes being implemented by Chief Minister K Chandrashekar Rao on the other.

On Wednesday, along with Nalgonda MLA Kancharla Bhupal Reddy, Rajya Sabha Member Banda Prakash, he carried out house-to-house campaign in Mosangi, Chepur and Thenepalli villages of Gurrampodu mandal in Sagar constituency and urged the people to support TRS candidate Nomula Bhagath Kumar in the Sagar byelection, who is the son of former MLA late Nomula Narsimhaiah.

Addressing the people at a meeting at Pochampally village in the same mandal, Minister Srinivas Yadav questioned the Congress leaders to answer whether they are not getting benefits of the schemes, which includes financial assistance provided by the TRS government under Rythu Bandhu and drinking water through Mission Bhagiratha.

The Minister demanded the Congress leaders to give up the benefits from the State government's schemes, before making comments on it. Kunduru Jana Reddy, who represented Nagarjuna Sagar constituency as an MLA and Minister for 35 years, had enjoyed the power but never paid attention on the issues in the constituency, he alleged. Jana Reddy was not available to the locals during his 35 years regime, he pointed out.

Stating that the people of the constituency have been facing many problems, the Minister informed that all issues will be addressed in a planned manner if they support Nomula Bhagath in Sagar byelection, which will be held on April 17. Chief Minister KCR designed several welfare schemes and implementing them for the welfare of the people of all sections of the society, he added.

He reminded that the CM launched free distribution of sheep and fish to restore the lost glory of caste-based professions. He recalled that the CM has been providing financial assistance of Rs 10,000 per acre to farmers to solve their investment problem to start cultivation. Development and welfare programmes are possible only through the ruling TRS, which will remain in power for another three years, he asserted.