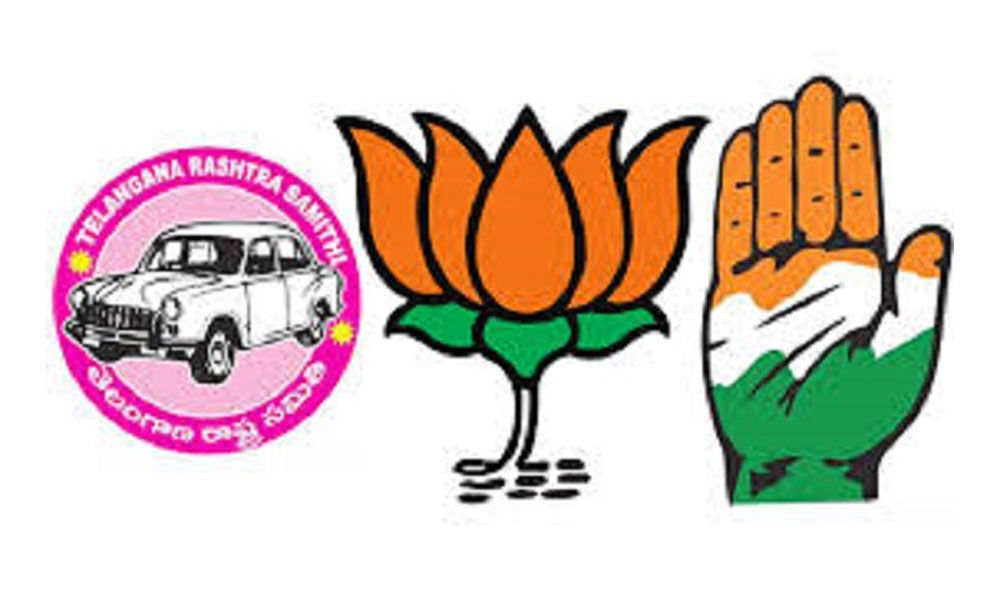 The TRS and the BJP ignored key contenders, but a beleaguered Congress fielded senior leaders to send a message it's still in the reckoning, as the Lok Sabha poll scene in Telangana hotted up.

Hyderabad: The TRS and the BJP ignored key contenders, but a beleaguered Congress fielded senior leaders to send a message it's still in the reckoning, as the Lok Sabha poll scene in Telangana hotted up.

And in an interesting development, BJP has fielded Bangaru Shruthi, daughter of former BJP President Bangaru Laxman, from Nagarkurnool constituency.

K Kavitha, daughter of the Chief Minister, is seeking reelection from Nizamabad, while in Khammam, the TRS has named former MP Nama Nageswara Rao, who quit the TDP earlier this week, as its candidate in Khammam.

In 2014, the TRS had won 11 seats, the Congress two, while the BJP, the TDP, YSRCP and AIMIM one seat each in Telangana, which has a total of 17 Lok Sabha constituencies.

Polls would be held in single phase on April 11 in the state.

This time, the TRS, brimming with confidence after sweeping the assembly elections last December, has said it aims to win nothing short of 16 seats, leaving one for the AIMIM, with which it has teamed up.

The Congress, which won in 19 of the 119 assembly constituencies, is reeling under a string of desertions of its MLAs.

As many as nine MLAs have announced their decision to join the TRS, dealing the Congress a huge setback ahead of the Lok Sabha poll.

However, the party is putting up a brave front.

It has fielded key leaders -- Telangana Pradesh Congress Committee President N Uttam Kumar Reddy, Working President A Revanth Reddy and Komatireddy Venkat Reddy -- to send a message to the party cadre that it means business in the Lok Sabha polls.

"All important leaders are contesting in the elections so that the defeat of the Congress in the assembly poll should not demoralise the cadre that we are on a weak footing", AICC in-charge of Telangana, Rama Chandra Khuntia said.