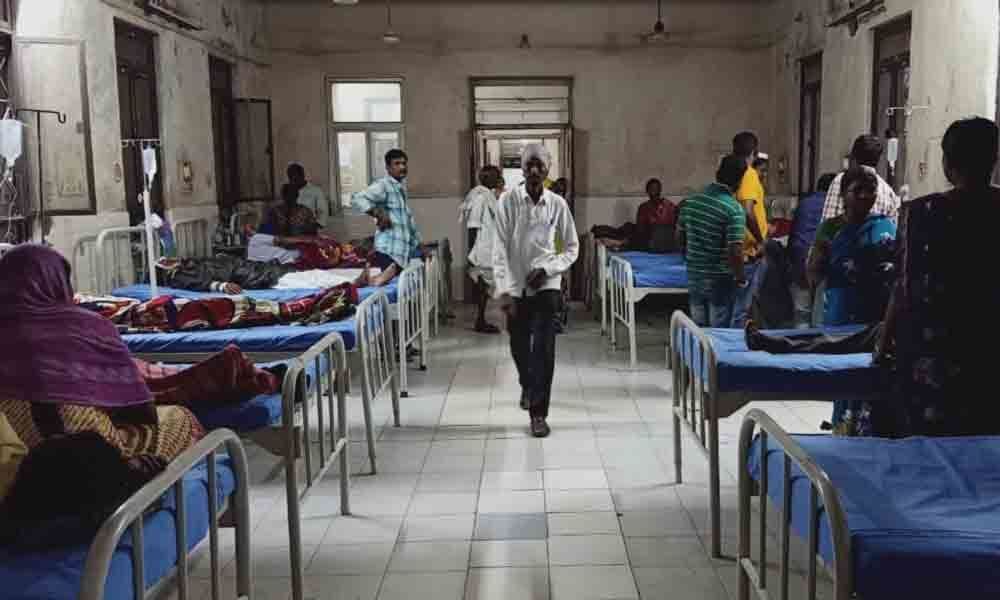 x
Patients at a ward in Karimnagar Government Hospital
Highlights

The spread of viral fevers and seasonal diseases is at an alarming rate and ringing danger bells in the undivided Karimnagar district.

Karimnagar: The spread of viral fevers and seasonal diseases is at an alarming rate and ringing danger bells in the undivided Karimnagar district. Many government hospitals and private hospitals at district headquarters are witnessing heavy rush of patients suffering from various kinds of diseases from all corners of the four districts - Karimnagar, Rajanna Sirclla, Peddapalli and Jagtial.

The hospital wards including children wards are filled with patients and several of them are facing hardships due to lack of beds in many hospitals.

In Karimnagar district, about 80 dengue cases have been diagnosed so far and four malaria and two swine flu cases. As there is no proper medical treatment in Karimnagar Government Hospital, doctors are referring the patients to hospitals present in Hyderabad.

The health officials have opened only one Out-Patient counter (OP) in Karimnagar Government Hospital to provide services while the patients, who are visiting the hospital in hundreds, have to wait for long time. Sometimes they have to return without meeting the doctor as the time is up. Moreover, the platelets machine is not working for the past few days. As per reports, more than 1,000 patients were admitted in Karimnagar Government Hospital suffering with viral and seasonal diseases.

While the problem is severe in Rajanna Sircilla district with large number of people rushing to the hospitals suffering from various kinds of diseases. About 14 dengue cases were diagnosed and 2,878 people had been reported as suffering from diarrhoea and 13,000 people with various kinds of viral fevers. As there is insufficient medical staff in several Primary Health Centres present across the district and in Sircilla Government Hospital, patients are forced to visit private hospitals spending large amounts of money for getting medical treatment.

In Peddapalli district, viral and seasonal diseases are spreading more in rural areas compared to towns. More number of cases had been reported in several Primary Health Centres present at the mandal headquarters compared to Government Hospital at the district headquarters.

In Jagtial district, the condition is serious that on an average daily 50 people are visiting Primary Health Centre in Gollapalli mandal suffering with various kinds of viral diseases.

Along with area hospitals, there are Vaidya Vidhan Parishads in all the four districts of Karimnagar, Sircilla, Peddapalli and Jagtial. But there is no coordination among the officials of both departments because of which patients are unable to get medicines and proper treatment on time.

RMO Dr Konda Sridhar said that all facilities are provided for rendering medical services to the patients visiting Karimnagar Government Main Hospital by an Out-Patient Centre. About 600 people visited the hospital in July alone including children suffering from diarrhoea and vomiting. Proper care is taken along with keeping Platelets machine ready for testing.

Many patients suffering from Dengue and Malaria of other districts are also visiting Karimnagar Government Hospital as the platelet machine is not available in their respective districts, he added.