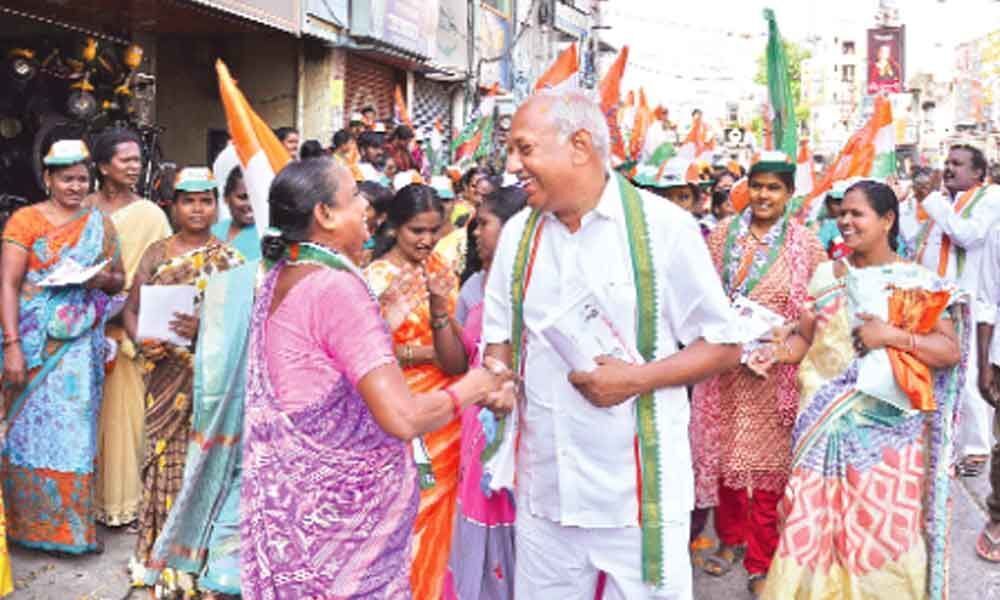 Tirupati: Chinta Mohan, the Congress candidate for the Tirupati Lok Sabha seat has assured people of taking up more developmental works once he becomes MP.

Former MP, who is contesting for Lok Sabha ninth time, has claimed that he was responsible for bringing various projects worth Rs 1 lakh crore to Tirupati Parliamentary constituency in his tenure. On Monday, Chinta Mohan met voters at MR Palle, Sri Krishna Nagar, Vaikuntapuram and other localities in the temple city as part of his election campaign. "My priority is to start the works of Dugarajapatnam port (Nellore district) once I become MP," he stated, criticising the Narendra Modi-led BJP government for neglecting port, promised in the AP Reorganisation Act.

Speaking to The Hans India before leaving to Sullurpeta in Nellore district for electioneering, he reiterated that Congress President Rahul Gandhi will grant Special Category Status (SCS) to Andhra Pradesh once the Congress comes to power at Centre. "I will strive to bring the SC status to Dalit Christians in the State," he stated.

The Congress leader gave a call to people to think about their future and cast their vote for a right person. Former Union Minister has mentioned that he was instrumental to bring NTPC-BHEL Power Projects Limited (NBPPL) plant at Mannavaram with an investment of Rs 8,000 crore, international airport to temple city, laying stone for international cricket stadium and sanctioning of 300-bed children ward in Ruia Hospital at a cost of Rs 35 crore. Chinta Mohan said he succeeded to impress upon the TTD to provide 5,000 special entry darshan tickets to locals on first Tuesday of every month. Other developmental works which were sanctioned in his tenure are Rs 60 crore grant to the SVIMS to provide free medical treatment to poor; allocating 7,008 houses to poor in Yerpedu mandal near Tirupati at a cost of Rs 292 crore.

To a question, Chinta Mohan stated that he would ensure permanent jobs in TTD are filled with local unemployed youth. Other promises he made are setting up Balaji Railway Division with Tirupati as its headquarters, relaunching works of NBPPL plant and getting more funds for development of pilgrim city once Rahul Gandhi becomes Prime Minister.