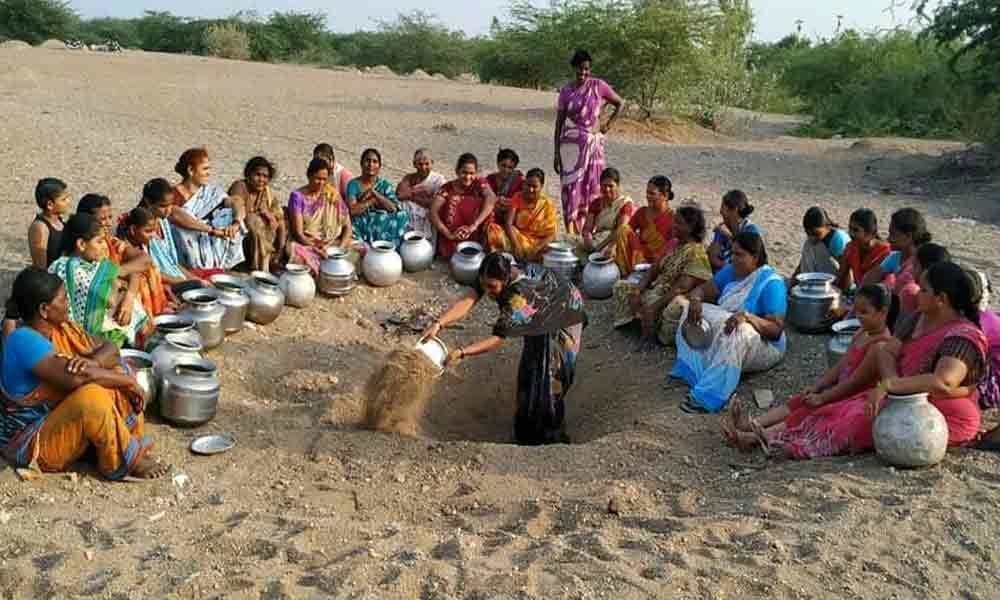 The drought has extended its tentacles to the riverbed villages in Prakasam district after ruining the western area and made people suffer from a shortage of water.

Ongole: The drought has extended its tentacles to the riverbed villages in Prakasam district after ruining the western area and made people suffer from a shortage of water. The continuous drought for fifth year in the district, forced people from many villages on the riverside or canal sides go in search of water as the borewells went dry and the supply from pipelines is not enough for daily use.

The effect of drought and continuous heatwave for the last three months in the district, have dried up the summer storage tanks and depleted the groundwater levels in almost all areas of the district. The western area, which is purely dependent on the rain is already suffering from water scarcity for two years and the RWS officials can supply only 20 to 25 litres per capita per day. Now, the villages beside the small rivers, rivulets and feeder canals, which are said to be in better condition are also facing the harsh atmosphere.

Madduluru, in Santhanuthalapadu mandal is beside Musi river. The village used to enjoy good levels of groundwater. Unlike in other villages, the villagers forced the officials to construct individual lavatories, without the fear to bring water from a far place.

But due to many conditions including the sand mining, continuous drought, and scorching summer, the borewells in the houses went dry and the nominal supply of water by the government every four days is of not much help. As the demand is not met, the women are forced to carry water from pits dug in the river or from neighboring villages.

M Suneetha, a woman from the village, said they dig three to four feet of pits in the river to get water from it, but it takes about 10 to 15 minutes to fill one pot. She said that if there are a few women, they need to spend more than an hour to get water.

She questioned that when there is no water to drink and bath, it is a luxury to have a bucket of water in the latrine, just for the sake of maintaining Swachh Bharat. The other villagers said that they are walking to Anakarlapaudi, at 5 km and paying Rs 5 per pot at the mineral water plant there.

Similar condition prevails in Ullapalem of Singarayakonda mandal, Karumanchi of Tangutur mandal and many such villages in Ulavapadu, Santhanuthalapadu, Tanguturu, Singarayakonda, Kondapi and other mandals. P Koteswara Rao of Karumanchi said that they were facing hard time since the water tank in the village dried up.

He said the water pipeline from Kondapi filter bed to Singarayakonda goes through Jayavaram, a neighboring village of Karumanchi. He demanded that the government should supply water from that pipeline to their village. S Koteswara Rao of Ullapalem said that his village was facing drinking water problem in every summer as the borewell dries up, but the government is not responding to their pleas.

He said recently the government provided water pipelines to nearby 10 villages from Ramatheertham water reservoir but didn't look at their village. He questioned that when they can provide a pipeline to Sanampudi, a 7 km village from Somarajupalle, why can't they provide the Ullapalem, which is less than 1 km in distance?

The officials, who should address the issue of drinking water to these villages were making arrangements to supply 5 lakh litres per day to an industry in Kovvur from Ramatheertham reservoir via Kondapi filter bed. The people demand the government to provide water for their thirst first.