Firms to be encouraged to set up industries in villages 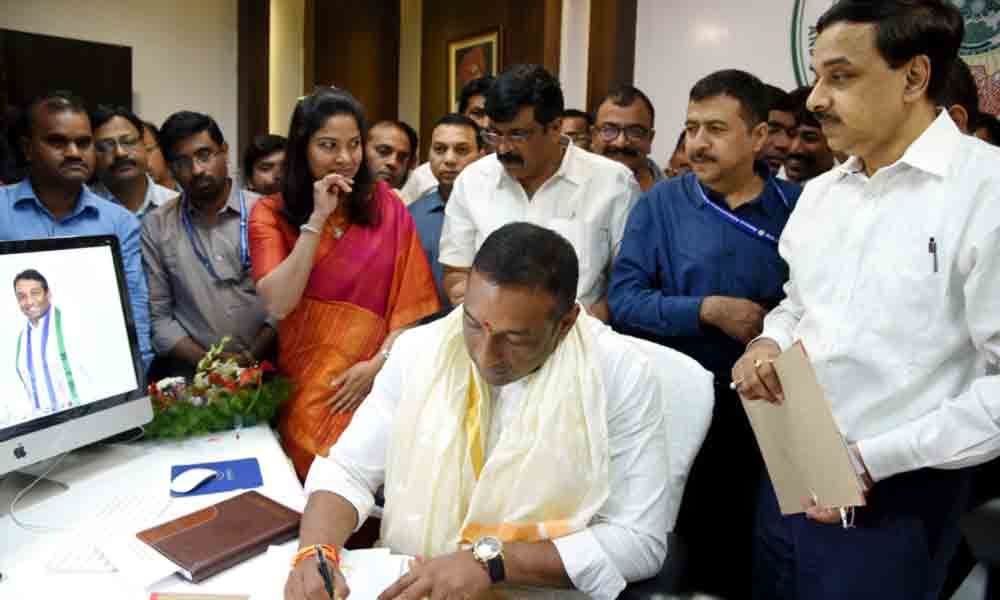 x
Minister for Industries, IT and Commercial Taxes Mekapati Goutham Reddy taking charge at the Secretariat at Velagapudi on Wednesday
Highlights

Industries and IT minister Mekapati Gowtham Reddy enters his chamber at the Secretariat after performing puja.Says companies will have to employ locals in more than 75% of total work force in the industries set up in rural areas.

Promises to look into reasons behind delay in setting up of industries by companies which have taken land from the govt following singing of MoUs at Partnership Summits in Vizag .

Amaravati: Minister for industries, IT and commercial taxes Mekapati Gowtham Reddy promised to bring new industrial policy and action plans soon to attract investment into both industrial and IT sectors. He entered his chamber at the Secretariat at fourth black after performing puja on Wednesday. Speaking on the occasion, Gowtham Reddy said companies will be encouraged to set up units in rural areas. Stating that the state government would roll out the red carpet for investors, he said by encouraging IT sector, the government wants to generate employment on a large scale for the youth.

The minister said companies which would be encouraged to set up industries in villages must ensure more than 75 per cent of work force consists of local people. On the other hand, the industrialists would get benefits from the incentives to be given to them by the state government, he added.

He said the government would chalk out an action plan within next three months incorporating all these proposals.

Gowtham Reddy said though some Memorandum of Agreements (MoUs) were signed at the Partnership Summits held at Visakhapatnam, but most of them were not materialised and the reasons for that would be identified. Some of the companies did not proceed as per the promise despite taking land from the government, he said while adding that the state government was identifying such companies and look into the reasons for the delay. He said appropriate action would be taken against such companies if any irregularities were found in the process.