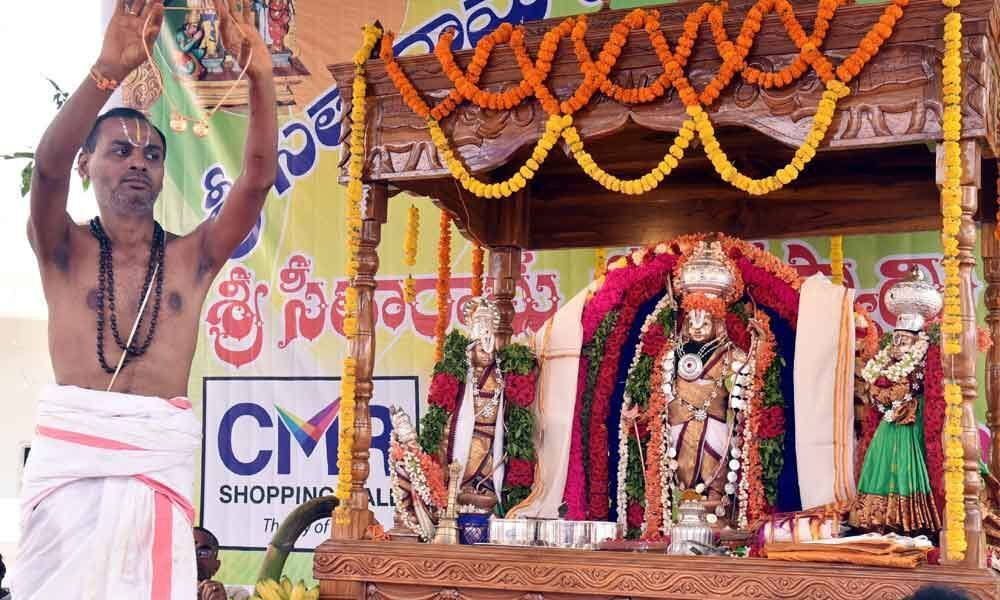 Celestial bath, ‘kalyanam’, ‘homam’, elaborate rituals marked the celebrations of the birth of Lord Rama across various parts of Visakhapatnam on Sunday.

Visakhapatnam: Celestial bath, 'kalyanam', 'homam', elaborate rituals marked the celebrations of the birth of Lord Rama across various parts of Visakhapatnam on Sunday. This year, the 'Navami thithi' was spread over two days – Saturday and part of Sunday. As a result, the celebrations continued on both the days. In some temples, 'Sri Rama Navami mahotsavamulu' was observed for more than a couple of days.

Elaborate arrangements were made by Sri Sita Ramachandra Swami Vari Devasthanam, Ambika Bagh, for the celestial wedding of Lord Rama and Goddess Sita. Many devotees made a beeline to the premises to offer prayers. The shrine of Shri Sai Baba Spiritual Centre, Seethammadhara, wore a festive look on the occasion.

In junctions near Satyam, a pandal was set up for Sri Rama Navami celebrations where devotees queued up to have a glimpse of the deities. The eye-pleasing rituals of 'Sita Rama Kalyanam', the celestial wedding of Lord Rama with His consort Sita, were held in various areas, including Sri Sathya Sai Prema Sadan mandir in MVP Colony, Vennelapalem in Parawada, Santinagar in Chinnamushidiwada, Police Barex and Sabbavaram, among other areas.

In Anakapalle, the celebrations began a day ahead and continued on Sunday. A large number of devotees in and around Kothuru witnessed a string of rituals organised to mark the festivities. Students took active role in rendering bhajans under the banner of 'Ramakatha' at Sri Sathya Sai Prema Sadan mandir, MVP Colony.

Despite the scorching heat, many visited temples to offer prayers to Lord Rama and participated in devotional programmes. While some of the residential colonies have set up pandals to celebrate the festivities in a befitting manner, social networking platforms were abuzz with the exchange of Sri Rama Navami wishes, images and stickers.