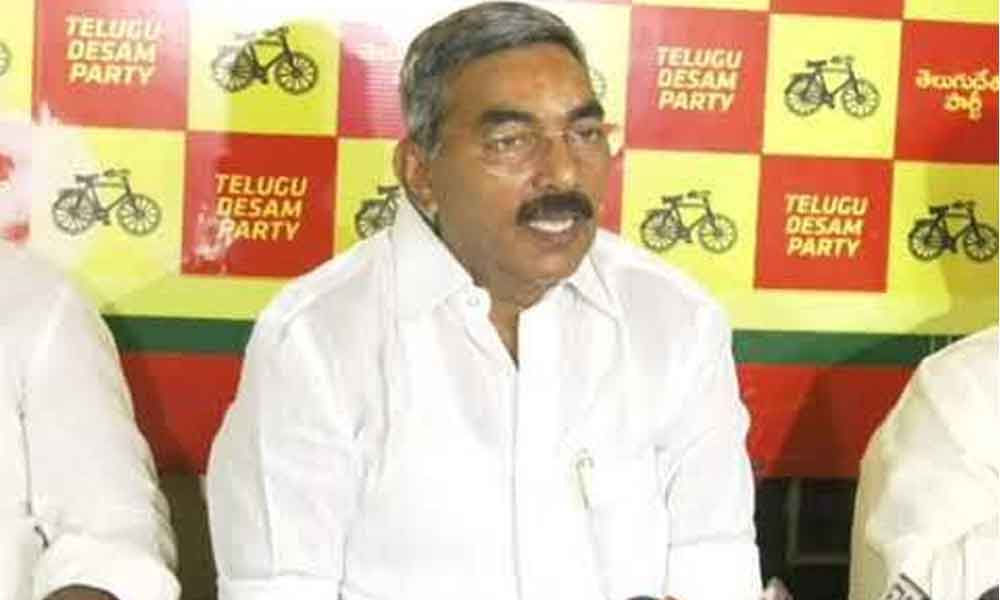 Former Minister and TDP leader Alapati Rajendra Prasad on Wednesday slammed the Jaganmohan Reddy government of misleading both the courts and Central government in order to misuse and divert over Rs 6,400 crore funds under the National Rural Employment Guarantee Scheme.

Amaravati: Former Minister and TDP leader Alapati Rajendra Prasad on Wednesday slammed the Jaganmohan Reddy government of misleading both the courts and Central government in order to misuse and divert over Rs 6,400 crore funds under the National Rural Employment Guarantee Scheme.

Rajendra Prasad accused the AP government of adopting a politically vengeful attitude even towards those who carried out the NREGS works during the previous TDP regime. The Centre had released Rs 6,400 crore to make payments towards those NREGS works but the YSRCP regime deliberately diverted the funds without giving valid reasons.

Addressing a press conference here, the TDP leader said that the AP government was telling lies to the Centre that irregularities took place in the NREGS works.

This was part of the ulterior plan to default the payments. The court has ordered for payment of the NREGS dues along with interest for 2018-`19 and 2019-2020 but the State Government was turning a blind eye. No fresh reports should be submitted once a social audit was completed but the Jagan regime was ignoring this.

Rajendra Prasad said that the Jagan Reddy Government was not hesitating to submit false reports to the court in order to avoid the NREGS payments. They misled the court that payments were made in all those works that were worth below Rs 5 lakh. This was done only in the Punganur and Pulivendula Assembly segments but not in the rest of the State. The shameless YSRCP regime was threatening not to pay the NREGS dues if the persons concerned would not join their party.

The TDP leader termed it as wrong on the part of the State Government to say over Rs 4,000 Cr released by the Centre towards the works completed in the TDP regime were spent for levelling of the lands meant for the house sites programme. But, in reality, not even Rs 500 crore was spent on this. The YSRCP leaders swallowed most of these funds by threatening and coercing the officials concerned and without doing any work.

Rajendra Prasad demanded the YSRCP regime to explain how there was so much development when the previous TDP rule did not carry out any work. The present government has ignored the transparent CFMS system and started drawing funds wrongfully in the name of the green channel method. The YSRCP regime was telling falsehoods that it had completed the NREGS works worth Rs 6,400 crore from May 2019 to March 2021. It should show in which villages these works were carried out during this period.