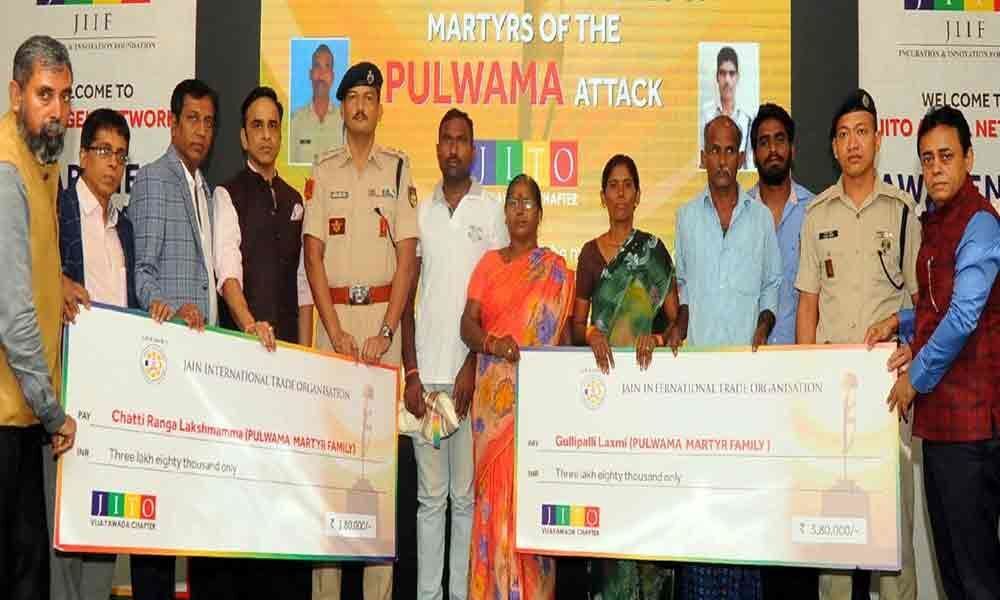 x
Jain International Trade Organization members saluting the bravery of our valiant soldiers by honoring with a cheque of Rs.3,80,000/- to each family.( Pulwana Martyrs ) in Vijayawada o Sunday
Highlights

Jain International Trade Organisation (JITO) has contributed Rs 7.60 lakh to the families of the martyrs of the Pulwama attack.

Vijayawada: Jain International Trade Organisation (JITO) has contributed Rs 7.60 lakh to the families of the martyrs of the Pulwama attack. It may be recalled that two CRPF jawans from Andhra Pradesh Chatti Praveen of Prakasam district and Gulipalli Srinu of Vizianagram district were martyred in Pulwama attack.

At a function organised in the city on Sunday, the JITO members presented cheques Rs 3.80 lakh for each of their family members. The cheques were presented by Dinesh Kumar Singh, second Commandant, CRPF, 39th Battalion and Kishan Salam, Deputy Commandant. Rangamma, mother of Praveen and Laxmi, mother of Srinu received these cheques on the occasion.

The JITO, Vijayawada Chapter Director Ramesh Jain said that JITO collected Rs 3.06 crore from the members across the country the amount was presented to Amit Shah, the present Union Home Minister on March 3, 2019 at Ahmadabad. On his advice, the JITO is being presented with the contributions to martyr families on a state-wise basis.

He said that the Jain community was always in the forefront in lending its support in the rehabilitation and nation building in times of crisis.Dinesh Kumar Singh lauded the service of JITO. He said that this kind of service by the society for the families of the martyrs definitely boosts the morality of Jawans who were prepared to sacrifice their lives for the sake of motherland. Girish Jain, Meenakshi Jain, Dilip Jain, Ashok G and Praveen Ranka and other members from Jain community were present.